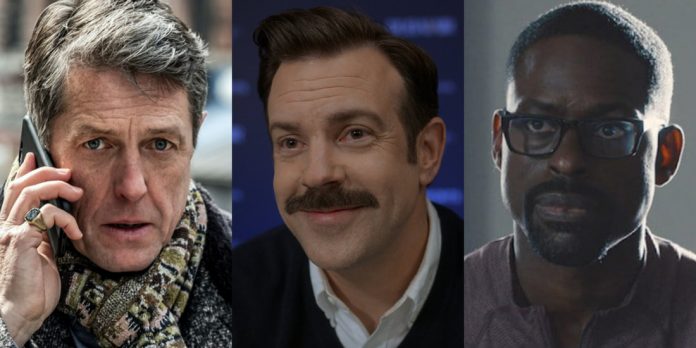 ​If you remember from last year’s Emmys and my Golden Globe, SAG Awards, and Oscars predictions, I try my best to leave emotion out of making my predictions. I’m going to take you television fans through how to make your Emmy predictions and win your pool methodically. Next up in this series of articles is Outstanding Lead Actor in a Comedy, Drama, and Limited Series/TV Movie.

​Six years ago, the Emmys moved to a plurality vote replacing the more level playing field of 80-100 person panel’s ranking the nominees. Since we spend more time watching television than a film, it’s easier to let our personal preferences affect our predictions as we try to manifest a win for our favorites.

The acting categories are where stats can only take you so far – instinct and buzz also matter. Let’s look at how to predict the winners for Outstanding Comedy, Drama, and Limited Series/TV Movie Lead Actor. These races are either too predictable or too topsy-turvy– that I will not be taking you through how to make your predictions methodically. Instead, we will look at the pros and cons of the frontrunners because anything can happen!

Keep in mind, since 2017 on the Drama side and 2018 on the Comedy side, we’ve seen a dominance of the performers from nominated series winning the acting Emmys except for “Saturday Night Live” on the Comedy Side and “The Handmaid’s Tale’s” hanging episodes in 2019. Then last year, on the Drama side, three of their six winners were from non-nominated series, but if you look at the 42 acting awards handed out, that gives a performer from a nominated series a 92% chance of winning. Let’s dive in….

After winning the Golden Globe, Critics Choice, and SAG Award, Sudeikis should add an Emmy to the list. This is as long as the voters do not get apathetic. Should this happen, look out for Hollywood Royalty Douglas to play spoiler with the final season of “The Kominsky Method,” practically acting as an f.y.c for his Emmy campaign.

Let’s assume that the first/last trend continues—this eliminates Brown but, he’ll likely get one more chance for the final season of “This Is Us.” Rhys competing for the first season of “Perry Mason” most likely will not factor into this race. The same can be said for Majors—he’ll probably get another chance in Guest next year for “Loki.”

O’Connor appears to be the frontrunner for his performance as the Prince of Wales and, so far, has picked up a Golden Globe and Critics Choice Awards as well as a SAG Award. But at the age of 30, he would be on the young side—Malek was 35 when he took the prize home. Also, a potential hindrance is his onscreen wife, Emma Corrin, who is also expected to win on the ladies side. The last series to do so was “Homeland” when Claire Danes and Lewis swept the top prize. If not, O’Connor lookout for past winner Porter, who could become the first since Cranston to win more than one Lead Actor trophy. Sweetening the pot even more, is his chance to be only the second African-American to win this category multiple times. However, after his first win Porter, did not receive a SAG Award nomination—most Emmy winners follow their first victory with a nomination from their peers as Lewis did after winning this category. Don’t count out Page and his swoon-worthy performance too, play spoiler, especially after picking up a SAG Award nomination. You never know…

Only “WandaVision” and “Hamilton” received a Series nomination. Odom Jr. has already won a Tony Award, Miranda is a Tony nominee both are Grammy winners for their performances in “Hamilton.” The Television Academy has had no problem nominating performers for their Tony-winning roles they just typically do not win an Emmy: Bryan Cranston (“All the Way,” 2016); Audra McDonald (“Lady Day at Emerson’s Bar & Grill,” 2016); Cicely Tyson (“The Trip to Bountiful,” 2013) Phylicia Rashad (“A Raisin in the Sun,” 2004); and McDonald (“A Raisin in the Sun,” 2004). Bettany plays a non-human entity and doesn’t have many opportunities to emote, which should stop him from taking the trophy home. Yes, “The Undoing” underperformed. However, after receiving a Golden Globe and SAG Award nomination. It’s not unheard of to lose both awards and win the Emmy—Riz Ahmed was able to pick up the Emmy for “The Night Of” (2017) after losing both. Grant uses rom-com charm to fool the audience into believing his character’s innocence until he finally drops the façade in the final episode. After being nominated for “A Very English Scandal” (2017), this could be the television academy’s opportunity to award Grant.

Do you agree or disagree with my logic? What are you predicting to win the Emmys for the Outstanding Lead Actor in a Comedy, Drama, and Limited Series/TV Movie categories? Let us know your thoughts in the comments section below or on our Twitter account. Stay tuned for more articles on the Emmys as I finalize my predictions for the 2021 Emmy Awards taking place on September 19th.