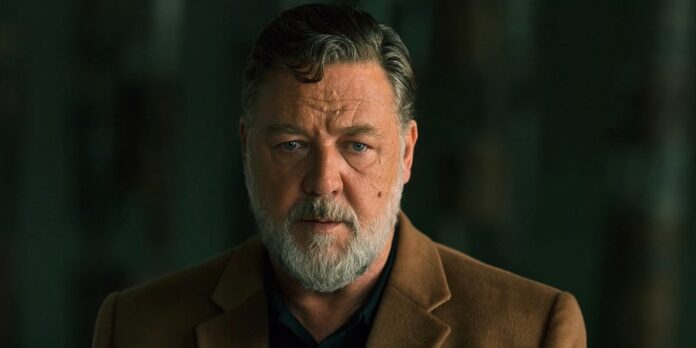 THE STORY – A tech billionaire hosts a high-stakes poker game between friends, but the evening takes a turn when long-held secrets are revealed, an elaborate revenge plot unfolds, and thieves break in.

Russell Crowe has always pushed against the notion of being a traditional leading man. While films like “Gladiator” (2000) and ‘A Beautiful Mind” (2001) crystallized him as such in the eyes of fans, he’s spent most of his career playing guys who are on morally shaky ground. Stellar performances in “L.A. Confidential” (1997), “The Insider” (1999), and “3:10 to Yuma” (2007) see Crowe split the difference between gruff exteriors and wounded interiors, so it makes sense that he would want to recapture this winning ambiguity when it came time to cast himself in his own directorial effort.

“Poker Face” seems like a perfect vehicle for Crowe, the actor, courtesy of Crowe, the director. He plays Jake Foley, a tech billionaire who gathers friends at his home for a high-stakes poker game. What starts as an innocent game turns sinister when secrets get revealed, stakes get raised, and a killer invades Foley’s home. It’s a neat premise and one that seemed refreshingly straightforward after the overreach that was Crowe’s directorial debut, “The Water Diviner” (2014).

Unfortunately, there aren’t many simple pleasures to be gained from “Poker Face.” Like Crowe’s aforementioned debut, the film tries to tack on too many themes and subplots for its own good, and the result is a crime thriller that’s way less thrilling than it thinks it is. If one squints, they can see what Crowe was going for here; a mashup of existential crime dramas from the likes of James Toback and Paul Schrader, but it’s evident from the opening scene that he doesn’t yet have the chops to make it work.

For starters, the film starts and stops with each new scene. It doles out information at a decent enough pace, but there are so many flashbacks and internal monologues by Foley that the stakes fall by the wayside. It doesn’t help that there are so many. There’s poison, devastating personal revelations, and a terminal cancer diagnosis that’s treated like a clever explanation for the character’s actions but only serves to raise more questions about his intent and how well-planned the whole poker game is really planned.

The screenplay, which Crowe adapted from Stephen M. Coates, is an assortment of cliches that fail to congeal into anything substantial. The supporting characters, which include the entrepreneur Drew (RZA) and the down-on-his-luck Mikey (Liam Hemsworth), show flashes of depth, but there’s never enough attention paid to them for their arcs to pan out. There’s also the simple fact that none of these men, Alex (Aden Young) included, seem like they would be old friends. There’s an awkwardness and lack of familiarity that lingers over the scenes involving this bunch, and it significantly dampens the believability of the whole premise.

Crowe still commands the screen, and truth be told, his performance is the single best thing about the film. He suggests an internal life for the character of Foley through subtle body language and carefully chosen words, and the times in which he’s left to rely on his wit result in much-needed moments of suspense. Unfortunately, the way the character is written takes away from these nuanced choices and leaves him feeling like the protagonist of a first draft rather than a final product.

I don’t think Crowe is a terrible director, and in fact, “Poker Face” provides some dynamic action scenes towards the backend that suggest previously unseen talent. Unfortunately, the screenplay is lousy, resulting in a film that feels dangerously close to being a glorified “straight-to-DVD” type release. To paraphrase a quote from Crowe’s most iconic film, we are not entertained.