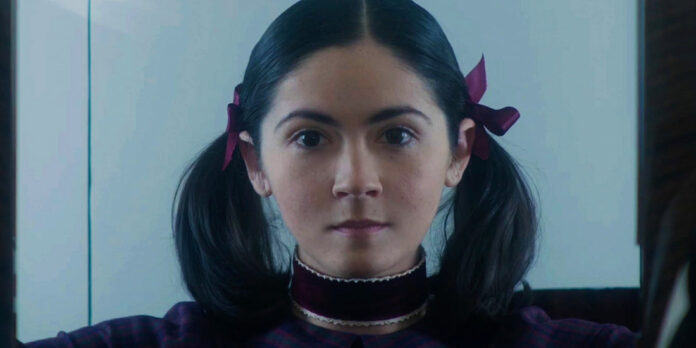 THE STORY – After escaping from a psychiatric facility in Estonia, Esther travels to America by impersonating the missing daughter of a wealthy family. Yet, an unexpected twist arises that pits her against a mother who will protect her family at any cost.

​​​When movies feature an iconic twist ending, they don’t typically lead to additional films. It’s hard to top an audience’s reaction to having the rug ripped out from under them by the surprising paths a story takes, which is probably why “The Seventh Sense” or “More Usual Suspects” never got made. Therefore, the idea of doing a follow-up to 2009’s “Orphan” may appear to be a pointless endeavor. The original film became infamous for the revelation about the true identity of the titular character (which will be spoiled in this review). However, the creative team behind the prequel “Orphan: First Kill” are clearly aware of the unenviable task they’ve taken on and use this cinematic chapter one as a chance to brilliantly upend the audience’s expectations once again.

Not-so-young Esther is at it again, for the first time. The villainous character (Isabelle Fuhrman) was revealed in the original “Orphan” to not be a child but, instead, a woman in her 30s with a unique growth condition that gives her the appearance of a little girl. She has a nasty habit of infiltrating families and seducing fathers while carrying out murderous schemes against anyone who gets in her way. “Orphan: First Kill” begins in the Estonian mental asylum where Esther (going by her actual name “Leena”) is being held. She quickly escapes and takes on the role of Esther Albright, an American girl who’s been missing for four years. She’s subsequently welcomed into the Albrights’ lives and begins planning how to take advantage of her situation most devilishly.

If this all sounds like a retread of the first film, don’t worry. Director William Brent Bell and writer David Coggeshall obviously know that the audience may be skeptical about this film’s ability to recapture the kind of zany, unexpected energy that the first film’s twist provided. Just as soon as things start to feel repetitive and unoriginal, the filmmakers wisely subvert expectations with some brilliant twists and turns. The film smartly restructures itself in a way that makes it hard to predict exactly where things are going.

Fuhrman is a stupendous anchor for this film’s wild ways. In the first film, she’s appropriately wise beyond her years while still being believable as a child. After all, the actress herself was no more than 12 years old when she delivered such a knowing performance. In “Orphan: First Kill,” she’s faced with an even stranger challenge – she’s an actress in her 20s who must play a woman in her 30s pretending to be a nine-year-old. Luckily, she’s more than up to the task. Thanks to a combination of styling, body doubles, and Fuhrman’s acting abilities, the illusion works.

Additionally, the gift of time has given her performance even more impact. Now that she’s an adult pretending to be a child, just like the character, Fuhrman brings additional depth to the character. Notably, the shift between her characterization of Esther versus Leena is chillingly distinct. Just because the audience is aware of the truth of her deception doesn’t mean it stops being enjoyable to watch her trickery. As her pseudo-mother, Julia Stiles serves up a delicious, campy performance. She’s forced to deliver some genuinely wacky dialogue and relishes the opportunity. She knows exactly what kind of movie she’s in. Unfortunately, the rest of the cast is not nearly as successful with their work. There’s very little unity amongst the ensemble’s performances; thus, most of the supporting performances either go too big or are, conversely, too internal for this type of film.

“Orphan: First Kill” is simply a fun time that will absolutely appeal to anyone who enjoyed the original movie. Unfortunately, it’s nowhere near as thrilling as that first film, as it trades in the suspense for a madcap, manic energy. While that may disappoint some, the “Orphan” series definitely shows surprising promise for potential future installments. Who wouldn’t want more of Esther’s adventures?