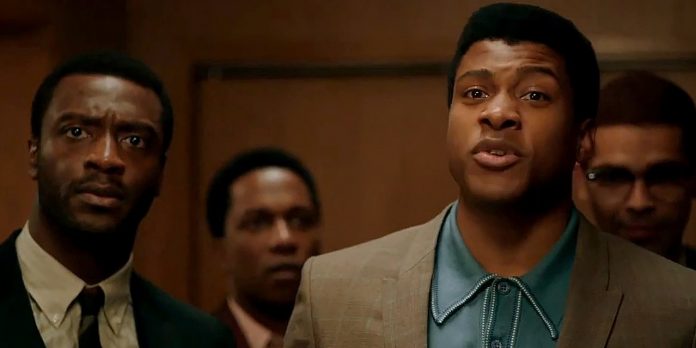 ​As per Variety a few days ago, Amazon Studios has confirmed the categories in which the actors of Regina King’s “One Night in Miami” will be campaigned for this year’s awards season. Kingsley Ben-Adir as Malcolm X and Eli Goree as Cassius Clay will be campaigned in the Best Actor category. In the Best Supporting Actor category, Amazon is campaigning Aldis Hodge as Jim Brown and Leslie Odom, Jr. as Sam Cooke.

With this even split for the film’s four central performances, Amazon appears to be attempting to maximize their potential for multiple acting nominations. Before this announcement, Ben-Adir and Odom, Jr. seemed to have the most buzz for their performances.

In the lead actor category, this year’s main contenders appear to be Anthony Hopkins (“The Father“) and Chadwick Boseman (“Ma Rainey’s Black Bottom”). Delroy Lindo (“Da 5 Bloods“), Gary Oldman (“Mank”), and Riz Ahmed (“Sound of Metal”) are also in contention. In addition, Daniel Kaluuya and Lakeith Stanfield are also in the running for “Judas and the Black Messiah,” however it has not yet been specified which actor will be placed in which category. Beyond these performances, the field is a bit more scattered. With Ben-Adir’s performance already having been singled out by critics as the film’s stand-out, there is certainly room for him in the Best Actor race.

Over in Best Supporting Actor, the men of “The Trial of the Chicago 7” seem to be taking up a lot of room. The consensus has not completely finalized yet, but it would appear that the most likely nominees from that film are Sacha Baron Cohen (who is bolstered by the warm reception to “Borat Subsequent Moviefilm“), Mark Rylance, Yahya Abdul-Mateen II, and Frank Langella. However, it is extremely unlikely that the Oscars will nominate more than two men from the same movie, so even on the best day for “The Trial of the Chicago 7” there should be an additional three nomination slots for other performances in the race. The other major contenders are Chadwick Boseman (“Da 5 Bloods“), Bill Murray (“On the Rocks“), and either of the men from “Judas and the Black Messiah.” With his co-star Ben-Adir competing in a different category altogether, Odom, Jr. now has a considerably easier path to a nomination in Best Supporting Actor. The Disney+ release of “Hamilton” this past summer, which features his Tony-winning performance, should also help him here. He is also a contender for the Best Original Song category for the song “Speak Now.” If he were to be nominated in both categories, it would continue the recent unexpected trend of dual performer-songwriter nominations, following Cynthia Erivo (“Harriet“), Lady Gaga (“A Star is Born“) and Mary J. Blige (“Mudbound“).

What do you think of these category placements? Who are the likely nominees at this point in the race? ​Check out our latest Oscar predictions here and let us know in the comments section below or on our Twitter account.