“ON A MAGICAL NIGHT” 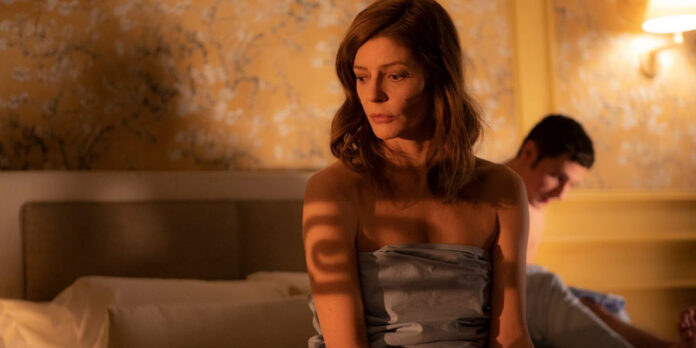 THE STORY – After 20 years of marriage, Maria decides to leave her home, go to the hotel across the street and contemplate her life.
​
THE CAST – Chiara Mastroianni, Vincent Lacoste, Camille Cottin & Benjamin Biolay
​
THE TEAM – Christophe Honoré (Director/Writer)
​
THE RUNNING TIME – 90 Minutes

​​A good character study often can lead to some riveting storytelling. Here’s a chance to showcase not only some wonderful performances but powerful commentary about how society itself deals with certain issues regarding personal relationships and struggles. Many have tackled such subjects in the past, and while there are varying degrees of success, there’s always potential to turn that into something truly profound. “On a Magical Night” is another entry that attempts to look at how certain people find themselves in a dramatic situation by examining the personal actions they took to arrive at a certain point. The film’s own choices aren’t always perfect, but they do result in a charming tale that harbors good performances and an appealing premise.

The story centers on a married couple on an evening where everything seems to be falling apart. Maria (Chiara Mastroianni) and Richard (Benjamin Biolay) are witnessing their decades-long marriage start to crumble after Maria is confronted over a recent affair with a younger man. Frustrated after a fight, she leaves for the night and stays in a hotel across the street. That’s when she magically encounters a younger version of her husband (Vincent Lacoste). He’s the twenty-something she initially fell in love with and it’s through conversations with him and other past lovers, who materialize just as mysteriously as he does, that she contemplates what all her decisions have led to and what choices she must make for the future.

There’s a sense of whimsical theatricality to the material that director Christophe Honoré brings to the screen. He creates a sense of intimacy between these characters that’s endearing and it thankfully never ends up feeling stiff. He captures a natural momentum that’s slow to build, but eventually reveals a charming report between these people and the surreal world they inhabit. The style embodies this perspective, and one is captivated by the emotional arch the story goes through. There are moments when the pace isn’t as engaging and some of the set pieces fall flat, but Honoré still manages to keep things moving in a way that makes this fanciful character study interesting. He finds moments of delightful introspection that are stylish and invigorating, and it all helps to manifest an absorbing environment.

His script is one that has decidedly more mixed results. There’s a fascinating concept that surrounds this confined story, and the way it discusses the nature of past relationships coming back to the surface is intriguing. It builds upon the idea that the people we fall in love with change with time, and what we desire at one stage in our lives can drastically alter into something different, but not altogether unwanted. At the same time, this exploration often comes across as shallow and makes the material feel a bit too ill-defined. The comedic beats don’t always land and the progression of these strange events happen arbitrarily without much consistency. There can be a joy in this discovery, but sometimes its charms become taxing.

Mastroianni carries most of the film herself, and she does a commendable job at portraying a woman who holds no regrets in her life until they come back to haunt her. It’s an emotional performance that doesn’t give into histrionics, and instead, finds a quiet and often humorous response to the events that surround her. Biolay portrays such a profound sadness but also doesn’t let his character drown in pity. He embodies a very empathetic man and the relationship between the two showcases an emotional bond that’s complicated but may be worth preserving. Lacoste has an infectious energy that captures a deadpan arrogance but also manages to become quite enchanting. The supporting players of past lovers all make their own delightful presence, particularly Camille Cottin, as a ghost from Richard’s past, who brings another level of tender somberness to the piece.

Not every element in “On a Magical Night” comes together in the most perfect way. The script isn’t always as sharp as its commentary could allow which can lead to a dull pace, particularly when the rules of this world aren’t that developed. All of that carries a heavy weight on the film and makes it less successful. At the same time, the tone never loses that much spirit, and thanks to some good performances and appealing direction, the outcome is an enchanting story about the ever-evolving nature of relationships with a unique approach. Overall, that’s a winning combination.