“HOW TO BUILD A GIRL” 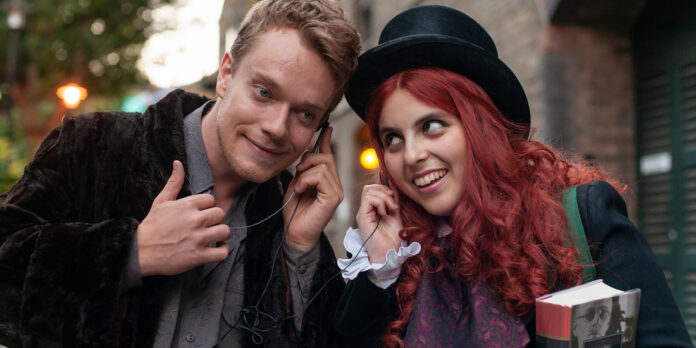 ​We all know the tropes of the coming-of-age story. It’s practically ingrained in us at birth. A young person (usually a teenager, but not always) wants something that is outside their grasp, works extremely hard to get it, pushes too hard and almost loses the core of themselves in the process, and finally comes to a more middle-ground persona and gets the thing they wanted, having finally Learned A Lesson and Grown Up. What makes any such story stand out from the others is how much unique personality it can inject into that formula. “How to Build a Girl”, adapted by Caitlin Moran from her own semi-autobiographical novel, has plenty of personality, enough to distract you from the fact that it is that very personality that gives the film most of its flaws.

Key to the film’s success is its star, Beanie Feldstein. Ever since making a splash as Saoirse Ronan’s best friend in 2017’s “Lady Bird”, Feldstein has been on the rise, only in need of that one big project to make her a true star. She was fantastic co-headlining 2019’s “Booksmart” with Kaitlyn Dever, but that didn’t quite make the cultural impression it should have, and now comes her first solo starring role. Her charisma makes it almost impossible to watch anything else when she’s on screen, but she still has an authenticity that makes her incredibly relatable and easy to root for, even when her character does some pretty awful things.

Feldstein plays Johanna Morrigan, a high school student from a poor family in the working-class West Midlands of England in the early 1990s. Johanna desperately wants to be a writer, but her writing is the only thing she’s confident about. She laments to the portraits of her idols on her inspiration wall (Elizabeth Taylor, Sigmund Freud, Jo March, the Brontë sisters, and Julie Andrews as Maria von Trapp, among others, all enjoyably given life by a cadre of British stars) that she has yet to have sex and needs to get out of her small town. She finally finds a way out when her brother finds an advertisement from a music publication, D&ME, looking for writers. After a humiliating trip to their offices, she demands a chance and gets an assignment to review a Manic Street Preachers live show. Johanna seizes the moment and creates a whole new persona for herself: Dolly Wilde, who dresses in tuxedo jackets and frilly skirts and wears a top hat atop her long, flaming red curls… and eventually learns to write with quite the poison pen. Will the promise of fame and fortune – and the pressure of being a woman in a man’s game – cause Johanna to embrace her Wilde side fully? Or will she see the light and leave it behind? We all know it’s the latter, but what matters is the journey, and that’s where “How to Build a Girl” hits a few bumps in the road.

Director Coky Giedroyc is not content to simply rest the entire film on Feldstein’s shoulders. Instead, she places her star at the center of a whirlwind of camera tricks, fantasy sequences, and flashy editing. Some of it works – the film’s opening scene, in which Johanna daydreams a slew of different high school boys performing various sexy scenes outside the library window, is a real winner – but most of it is just style for style’s sake, deployed at random and failing to add anything to Feldstein’s superb character work. It’s often too much, as if Giedroyc didn’t fully trust the material to stand on its own. In a story about a girl learning how much is too much, maybe this was intentional. But the film is undeniably at its best when it’s focusing solely on Feldstein, especially in the intimate scenes she shares with Alfie Allen’s guarded rock star John Kite, who may just be the kindred platonic spirit she didn’t know she needed. In those scenes, the swirling energy of the film slows down, allowing us to just be with these characters. Had the film done more of this, it may not have gotten as much attention from today’s overstimulated youth, but it would have become a much more affecting character study.

As it stands, “How to Build a Girl” will certainly find its own little cult audience, one that appreciates the story’s message about trying again and again until you find your true self, and even just having the gumption to try out something completely different to see what you could be. And even in the film’s busier, messier moments, Feldstein is always highly watchable, and more importantly, relatable. Her accent work may be a bit dodgy, but she seems like a real girl, one who you want to see earn the happy ending you know is coming. Her considerable charm carries the film over its rougher patches to make it an entertaining watch. She’s building quite the career for herself. Now she just needs to find the right vehicle.