“DAWN OF THE PLANET OF THE APES” 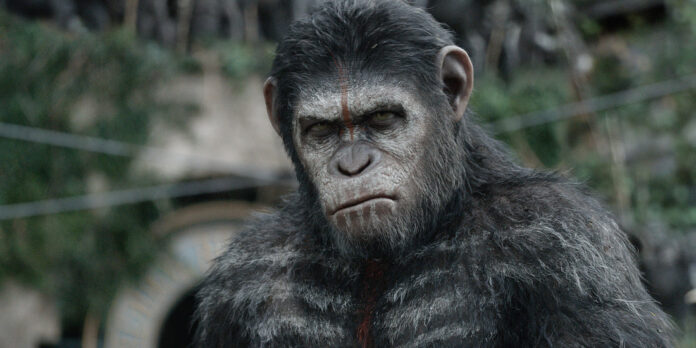 THE STORY – Ten years after simian flu wiped out much of the world’s homosapiens, genetically enhanced chimpanzee Caesar (Andy Serkis) and his ever-growing band of followers have established a thriving colony just outside San Francisco in Muir Woods. Meanwhile, a small band of human survivors emerges, which forces Caesar — as leader — to grapple with the dual challenge of protecting his people and re-establishing a relationship with the remaining human population — the latter being Caesar’s secret wish.
​
THE CAST – Andy Serkis, Jason Clarke, Gary Oldman, Keri Russell, Toby Kebbell & Kodi Smit-McPhee

Following the strong foundation laid out by “Rise Of The Planet Of The Apes,” “Dawn Of The Planet Of The Apes” is the rare sequel that bests the original in nearly all areas. From the Shakespearean continuation of Caesar’s journey to the visual effects work, the production design and the scale of the story, which we know will eventually overtake the entire planet, director Matt Reeves does a phenomenal job with this middle installment in what is now regarded as one of the most underrated trilogies of all time. With parallels to today’s society, the film has only gotten better with age, showing us what real courage and strength looks like in the face of fear and hatred.

There’s been a 10-year time jump since “Rise Of The Planet Of The Apes,” as an opening graphic shows us the spread of the Simian flu and how it wiped out nearly all of humanity. Those who have survived are immune to the disease and hoping to rebuild their lives and reclaim the Earth. One day in the woods outside of San Francisco, Malcolm (Jason Clarke) and his wife Ellie (Keri Russell), along with their son Alexander (Kodi Smit-McPhee), encounter Caesar (Andy Serkis) who is not only the leader of the apes but now a father to two sons, as he’s built a colony for his people and his family. He wants nothing more than to keep them safe, while the humans want the same thing for themselves, hoping to rebuild a dam which will bring electricity and power back to their community run by Dreyfus (Gary Oldman). Caesar, who knows the good side of humanity, attempts to help the humans so that both sides can co-exist in peace. However, there is desertion amongst Caesar’s ranks as the once human-tortured ape Koba (Toby Kebbell) can’t understand Caesar’s logic and fears that the humans will inevitably attempt to destroy them all, leading to a conflict that will alter the course of both ape and human history.

Where Matt Reeves excels with “Dawn Of The Planet Of The Apes,” is in all of the work with the ape characters. The human characters? Not so much, as they are saddled with weaker dialogue, characterization, and less screen time. However, the central conflict between Caesar and Koba is so well defined and presented that it drives the emotional thrust of “Dawn” to heights greater than “Rise.” Both characters have strong ideologies and when a real shot at peace is presented, it’s met with fear and hatred not only by Koba but also by some of the humans, personified by Gary Oldman’s character. Reeves attempts to draw similar parallels between both groups as the plot progresses but its the drama surrounding the apes that works the most. The film attempts to show the darkness of humanity, through the character of Koba and the grace that we can also show through Caesar, giving us a universal story of good and evil but told with CGI apes.

It’s a revelation that the storytelling works as well as it does but its an immense credit to Reeves’ patience with story and ape characters, plus the phenomenal acting on display from Andy Serkis and Toby Kebbell, aided by the groundbreaking motion-capture visual effects work that holds it all together. The technicals don’t end there though, as the production design of “Dawn” outshines “Rise” with detailed and vast work, especially on the Apes’ home in the woods. Michael Giacchino’s score is very good without drawing attention to itself and the film’s darker color palette aids the continuation of the story well as the stakes get higher and higher for Caesar. The pacing of the movie feels very much like a powder keg waiting to explode as everything builds to the climactic scene of the Apes attacking the human complex, led by Koba. As great as that action setpiece is, the film does slow down a bit in the aftermath, as the film is forced to rebuild its momentum all over again, culminating in one final showdown between Caesar and Koba on top of a massive construction site.

“Dawn of The Planet Of The Apes” ends on a beautiful and hopeful note, that despite all of the conflict and devastation, with the right leadership, life, whether it be human or ape, can find a way towards not only survival but peace. It’s a message that is needed today more now than ever, as our own country is being torn apart by strong beliefs and ideas and possibly heading towards self-destruction. But as the story begins with a closeup on Caesar’s dark and angry looking eyes, the films ends on another close-up, but this time wide, bright and filled with hope. A dawn of a new era, one that can only be born from great struggle.