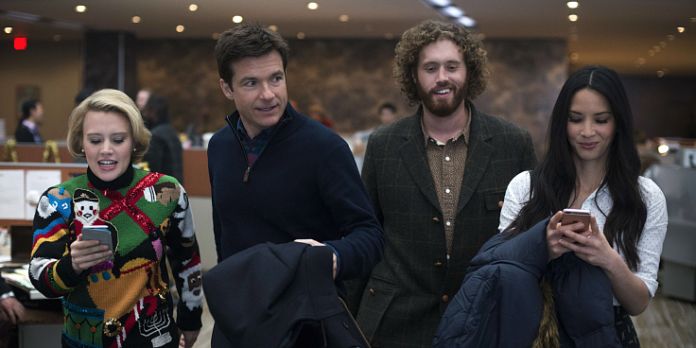 THE STORY – When the CEO (Jennifer Aniston) tries to close her hard-partying brother’s (T.J. Miller) branch, he and his chief technical officer (Jason Bateman) must rally their co-workers and host an epic office Christmas party in an effort to impress a potential client and close a sale that will save their jobs.
​
THE CAST – Jason Bateman, Olivia Munn, TJ Miller, Jillian Bell, Courtney B. Vance, Kate McKinnon & Jennifer Aniston

​​”Office Christmas Party” is nuts, it’s juvenile and it’s actually enjoyable in many parts due to its talented and comedic cast of actors and actresses who help to elevate the material. They help you to feel like this is one party that you would not want to miss. This does not mean that “Office Christmas Party” is a good movie, nor is it a realistic movie in any sense. The premise is pretty ridiculous, while the way in which it all ends is even more insane and completely unbelievable. The laughs (Of which there are a few) are few and far in between and the Christmas spirit gets lost amongst an immature story of partying, prostitutes and drug-induced debauchery.

“Zenotek” is a technology company in Chicago, where CEO Carol Vanstone (Jennifer Aniston) is threatening to close the branch that belongs to her brother Clay (TJ Miller) who only has his position in the company due to the work of the previous CEO, their father. Realizing that he has one last ditch effort to save his employees, Clay partners up with his friend, CTO and newly divorced Josh Parker (Jason Bateman) to throw an amazing Christmas Party at the office. The goal is to show a potential client (Courtney B. Vance) a great time in hopes of securing his business, closing the deal and keeping their branch of the company alive.

Let’s get the positives out of the way first. The cast in this film are completely likable and seem to be having a great time (As evidenced by the end credits photo booth pictures montage). If you are a fan of everyone’s previous work, then you’ll find nothing new here (Except for Jennifer Aniston who plays a hard and downright soulless CEO) and that will determine whether you like this movie or not. TJ Miller essentially plays his exact same role from “Silicon Valley” as an idiotic boss-type who acts like an overgrown man-child. Jason Bateman plays the straight man, just as he does in every movie we have seen him in over the past decade.  Olivia Munn is, like Jason Bateman, playing the straight female role that is nowhere near as interesting as any of the work she gave us while on “The Newsroom.” Kate McKinnon (Who is the MVP in this movie in my opinion) is a joy to watch as ever but does not give us a character that’s as much different than anything we’ve seen her give during her time on Saturday Night Live. As said before, Jennifer Aniston is the only one who plays against type here and gives us a fun performance that is unlike her usual work as a stuck up, terrifying boss that would give Meryl Streep from “The Devil Loves Prada” a run for her money in terms of downright nastiness. The other supporting players round out the cast including Courtney B. Vance, Jillian Bell, and Rob Corddry amongst others in an entertaining matter that actually manages to outshine the main cast.

Where “Office Christmas Party” fails is in presenting its overall story in a manner where a reasonable life lesson can either be learned or dissected for analysis. It’s a straightforward film with questionable morals and by the time it’s all over, we are left wondering what the point of the movie was? If it was to make us laugh, it manages to do that at times but not 100% of the time. If it was to tell us a story about how having fun and taking risks, can lead to you getting the girl, saving your company and bring your family closer together, then it does this on the most superficial of levels.

There’s no doubt that the cast of “Office Christmas Party” is having a great time and sometimes that does indeed transfer over to the audience. I certainly had my moments where I laughed at the crazy antics that Kate McKinnon, TJ Miller, and Courtney B. Vance were doing. And then I had my times where I sat in my chair, stared at the screen and wondered if this was really all that this film had to give in terms of character, story, and overall comedy. There are already so many holiday classic comedy films that have come out over the years (Including last year’s “The Night Before”) that “Office Christmas Party” will, unfortunately, get lost in the shuffle as the years go on.