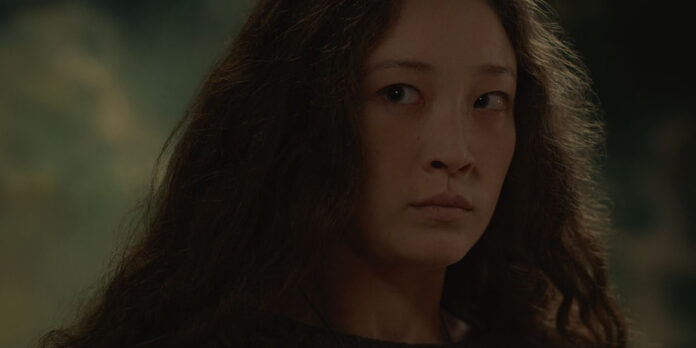 THE STORY – A young woman becomes stranded in a motorway rest stop during a blizzard and discovers a kidnapped girl in a van. Determined to discover the identity of the kidnapper, she investigates the group of strangers trapped inside with her.
​
THE CAST – Havana Rose Liu, Danny Ramirez, David Rysdahl, Dennis Haysbert, Dale Dickey & Mila Harris

​​Darby (Havana Rose Liu) is in rehab for at least the seventh time. She’s heard and seen it all before and is questioning whether it does any good at all. Perhaps recovery really is a Sisyphean task, like one of her fellow addicts suggests in her recycled story in group. She’s already halfway out the door, but then she gets a call that her mother is being taken to the hospital for what might be her final hours on Earth. Now, she must get out. The rehab facility won’t let her out without permission from her doctor, who is unreachable, it being a Friday and all. So she steals a phone from one of her fellows and hijacks a car that belongs to one of the nurses. When her sister tells her not to come, that her mother doesn’t want her there, Darby continues on anyway but gets stalled by a massive snowstorm that closes the road. She stops at a rest stop where other travelers are also stranded. Stepping outside to try to get a signal, she sees something she shouldn’t: A young girl bound and gagged in the trunk of a van. Someone in the rest stop is a dangerous kidnapper, and Darby has to figure out who.

If the setup of Damien Power’s “No Exit” (adapted from the novel of the same name by Taylor Adams) feels like something straight out of the Twilight Zone, well… it kind of is. “No Exit” recalls nothing so much as Rod Serling’s classic episode “Will The Real Martian Please Stand Up?” in which an alien is hiding at a roadside diner full of people, and two state troopers have to figure out who it is. It’s an almost foolproof setup, as we find ourselves working alongside our protagonist to read the clues in everyone’s body language and words. Who would kidnap this poor little girl? Is it the extremely shifty, socially awkward loner (David Rysdahl)? The chill, almost too self-confident hottie (Danny Ramirez)? Or the couple, a veteran Marine (Dennis Haysbert) and former nurse (Dale Dickey), on a surprise trip to Reno? What makes “No Exit” incredibly clever is that it lets the cat out of the bag relatively early on, playing with the old Hitchcock adage that showing people the bomb under the table creates minutes of suspense, as opposed to the seconds of surprise if the bomb just explodes out of nowhere. But there’s still quite a bit of movie left at the point when we find out who the kidnapper is, which could make an otherwise airtight thriller deflate pretty quickly. Thankfully, Andrew Barrer and Gabriel Ferrari’s fiendishly clever screenplay has plenty of tricks up its sleeve to ensure that we stay invested in Darby’s journey while on the edge of our seats.

Once the hammer drops, “No Exit” actually picks up the pace, throwing plot “twists” at us at an unrelenting pace. Just when you think you’ve felt the ground back under your feet, the film pulls the rug out from under again, but since the ensemble is so strong, the “twists” always feel like revelations, grounded in reality and sterling character work. Liu is the linchpin, a steady center for the film even when Darby herself is unsteady. Because of Liu’s unforced emotional clarity, It’s easy to feel for her and root for her to overcome her tragic past and survive this ordeal. But this is truly an ensemble film, and everyone else approaches their work with the kind of attention to detail we rarely get in grotty little B-movies like this. Rysdahl and Ramirez are both compelling presences in very different ways, the former all surface and the latter more internal. The pairing of Dickey and Haysbert is genius, his stalwart stolidity perfectly complementing her pragmatic prickliness. Everyone is having fun playing these characters, but they never once condescend to them nor to the audience.

So what we have here is a rarity: a nasty, borderline nihilistic trashy single-location thriller with a tight script and strong performances. “No Exit” plays remarkably fair by the genre’s standards, reveling in its wintry atmosphere and increasingly bloody twists. The woods surrounding the rest area can look a little too set-like at times, giving the film a bit of a cheap feeling, but the characters are so well-drawn and compellingly performed that this is easy to overlook. We rarely get small-scale, low-budget thrillers that are as genuinely thrilling and difficult to predict as this. It may be going directly to Hulu, but watch “No Exit” with friends if you can. The screams and shouts that will go off regularly during the film’s diabolical second half will be worth it.