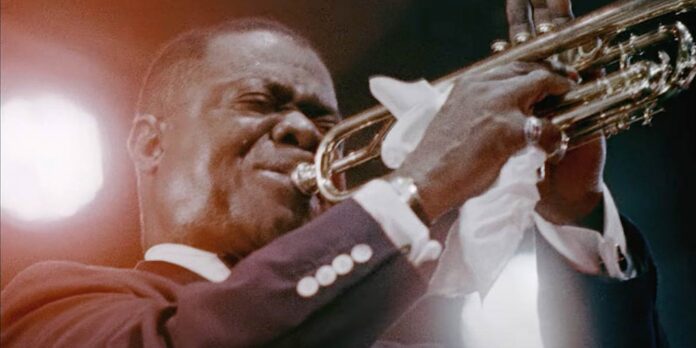 THE STORY – This documentary honors the musician’s legacy as a founding father of jazz. The film shows how Armstrong’s life spans the shift from the Civil War to the civil rights movement, and how he became a lightning rod figure in that turbulent era.

Lining the walls of Louis Armstrong’s study in his Queens home were tapes upon tapes of audio recordings he kept over the years. With that distinct gravelly and powerful voice, they were a way he could organize his thoughts and keep track of day-to-day life. For director Sacha Jenkins, those tapes were a treasure trove to be searched through to give us an authentic glimpse into the legend’s life.

Jenkins provides an honest and unique portrait of the musician’s early days and various points of his career in “Louis Armstrong’s Black & Blues.” By using his audio recordings, diary entries (read by rapper Nas), archival footage, and interview clips, audiences feel like they’re being introduced to Armstrong in a new way and possibly for the first time for young viewers. We see Armstrong as a multilayered man who, more than just being a wonderful musician, grappled with society and his role in it. Voiceover interviews with his wife Lucille, jazz historians, and other musicians also provide a deeper context for what he meant to the masses, particularly to Black artists.

The documentary captures the exciting way Armstrong, nicknamed Satchmo and Pops, got his start in music. It may surprise many that it was during an 18-month detention at the Colored Waifs’ Home for Boys. His talents could be seen early on. One interesting tidbit explains he played with his idol Joe “King” Oliver in Chicago but was ordered to stand in the back of the stage because he overpowered Oliver. You could place Armstrong anywhere, but audience members would have all eyes and ears on him. His old-school charms and phrases – calling other people “cats” – easily put a smile on anyone’s face.

Seeing various clips of him perform is a treat throughout the documentary, particularly the only footage available of him in a recording studio. With his head back, handkerchief wiping his head, and powerful register, he could enchant audiences anywhere. His impact on music is undeniable in more ways than one. During the 1926 recording of “Heebie Jeebies,” Armstrong dropped his lyric sheet midway through the song but was ordered to keep singing. That moment flooded his mind with memories from when he and his friends, singing on New Orleans street corners to get some money, would make up tunes when they didn’t know the words to songs. He leaned into that during that recording session, and how people thought about music suddenly changed forever.

His rise to unfathomable levels of international fame didn’t mean he was immune to the racist, ugly world around him. During one show in his hometown of New Orleans, an announcer refused to introduce him to the audience because of his skin color, and Armstrong had to do the job himself. Black people also weren’t allowed inside the club, and the only way they could hear his music was by gathering at the nearby levee. Armstrong admits at one point that he forgot about the way of life in the South during his time in the northern states.

Among the many interesting commentaries in the documentary is how he was regarded among other Black artists. Jazz musician Wynton Marsalis was one who didn’t appreciate Armstrong because of his “Uncle Tommin'” image. When he couldn’t play one of Pops’ tunes, Marsalis gained a deeper appreciation for Armstrong’s musicality. Actor Ossie Davis also had similar feelings like Marsalis. “Everywhere we looked, there would be old Louis, sweat poppin’, eyes buggin’, mouth wide open, grinnin’ oh my lord from ear to ear… Doin’ his thing for the white man.” But one day, on the set of the film “A Man Called Adam,” Davis saw Armstrong sitting by himself, staring out into space with the “saddest, most heartbreaking expression.” That look shook Davis and reminded him of all the men in his life “doing exactly what Louis had to do, for the same reason: to survive.”

While many said he didn’t speak about civil rights or stand up for himself enough, personal tapes and archive footage show otherwise. He wasn’t afraid to curse at people or call them all kinds of insults. He stood up to his greedy manager, who took way too much money for himself. On the matter of civil rights, though, he wasn’t a full-fledged activist. He shared his opinions about school integration and the Arkansas governor and even sent a wire to President Eisenhower saying that if he went in with the troops at Central High in Little Rock, Armstrong would go with him. It’s interesting to learn that some people said he shared his opinions a little too much and didn’t know what he was talking about because he was a musician. He essentially lived the expression “damned if you do and damned if you don’t.”

One tick against the film is that it brushes past a good portion of his career, where he really honed his craft and became a worldwide legend. We’re expected to fill in the blanks ourselves, as we get a very detailed look at his youth and early career days and then skip to an established and beloved musician. But Jenkins still manages to surprise us with many revelations in “Louis Armstrong’s Black & Blues.” Armstrong will always be remembered fondly for his musicality, but having his opinions on various topics and societal issues so prominently displayed allows us to hear him loud and clear, and maybe for the first time ever.

<b>THE GOOD - </b>The documentary provides an honest and unique portrait of Louis Armstrong's life that spans his musical career and more. It's a great introduction to the artist for a new generation.<br><br> <b>THE BAD - </b>Jenkins brushes past a good portion of his career where Armstrong really honed his craft and became a worldwide legend.<br><br> <b>THE OSCAR PROSPECTS - </b>None<br><br> <b>THE FINAL SCORE - </b>8/10<br><br>"LOUIS ARMSTRONG'S BLACK & BLUES"