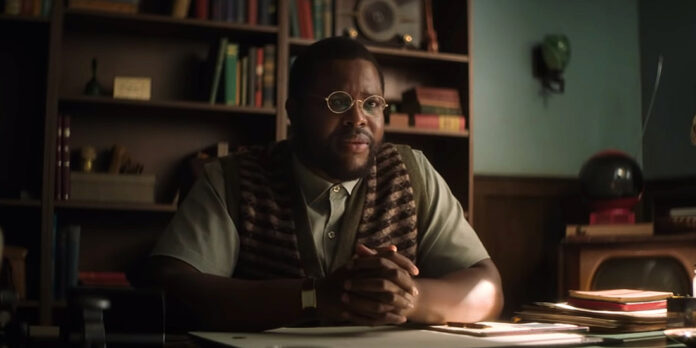 THE STORY – A man interviews five unborn souls to determine which one can be given life on Earth.
​
THE CAST – Winston Duke, Zazie Beetz, Benedict Wong, Bill Skarsgard & Tony Hale

​​Films that deal with human existence are often stranded in narrative limbo, between fantasy and reality. It can be challenging to establish the ground rules of a story’s universe, and the existence of an eternal soul can often nullify dramatic stakes. How concerned can we be for a given character if we know they’ll be sent to an afterlife upon death? “Nine Days” is the latest film to engage and grapple with these otherworldly elements. Still, what writer/director Edson Oda lacks in subtlety he makes up for with thoughtfulness and ambition. It’s a film that swings for the fences, dramatically speaking, and manages to pull it off.

“Nine Days” centers around Will (Winston Duke), an old soul who serves as an arbiter between the celestial and mortal worlds. He dedicates his existence to the judgment of new souls and decides whether they should be given the gift of birth. He works from an isolated cabin, with another soul, Kyo (Benedict Wong), as his only consistent point of contact. Will is constantly watching TV monitors and jotting down notes on the significant events in people’s lives. He records each of these monitors on VHS tapes and crams notes into a file cabinet that looks as though it’s ready to burst. This emphasis on tedium helps to ground what is an otherwise fantastical assignment and to communicate the severity of Will’s decision. There can be no mistakes when it comes to granting existence.

Will takes personal joy in watching humans like Amanda, a violin prodigy who’s poised to take the next step in her fledgling career. That said, it’s this personal connection that makes Amanda’s sudden death in a car accident so painful. A grieving Will is forced to find a replacement soul within nine days and begins interviewing applicants hoping that one will prove themselves worthy.

Oda’s depiction of the interview process is what gives the film its singular tension. He provides each prospective soul a distinct personality and places them in opposition to Will, who tries his best to remove personal bias. The inhuman (or pre-human) beings adopt human traits in an effort to win over Will’s approval, and the results are fascinating as they are messy. Alexander (Tony Hale) is prickly and defensive, so quick to diffuse any reason for his exclusion that he winds up alienating the rest of the souls in the room. Kane (Bill Skarsgard) is pious and reserved, the apparent frontrunner, but his pessimism suggests problems down the line.

Duke gives the performance of his career as the endlessly conflicted Will. The actor has proven adept at bringing goofy charisma to blockbusters like “Black Panther” and “Us.” Still, his comedic inclinations are dialed down here, and his innate empathy is allowed to take center stage. His character knows that selecting one soul means erasing others from existence, and the weight of that responsibility wears on him like the notes in his crumbling cabinet. Better still are the moments in which the souls break protocol and force Will to view them as equals.

No character achieves this as effectively as Emma (Zazie Beetz). She sidesteps the applicant process when she determines she’s too volatile to be selected and opts to live out the rest of her nine days to the fullest. Will is confounded by the breach of protocol. His increasingly intimate conversations with Emma force him to reconsider previously held truths about existence and what it means to be “alive.” Beetz has always been a livewire performer, bringing unpredictability to her roles, but here, she works with Oda to bring a bubbling sense of tragedy to the surface. By choosing to celebrate the time she has left, the film poses her as perhaps the most human presence of them all.

Oda’s allegorical structure works so well because it’s grounded in genuine interactions. The audience is never left to question why a character acted a certain way because it’s inherent to the situation they’re put in. Will’s ultimate decision is a sound one, but the emotional toll it takes on both him and the viewer forces one to reconsider the value of human life. “Nine Days” is the rare high-concept film that delivers come the final act, and it does so by honing in on the personal dynamics between its characters. After all, what else is there?

If I had to pick a bone with “Nine Days,” it would be Oda’s occasional decision to go abroad with the drama. A few moments are scattered throughout that border on saccharine (some involving the Alexander character) and break the subdued tone of the rest of the film. It’s understandable, given the otherworldly ingredients, but the direction and performances are always stronger when Oda is keeping this penchant in check.

One could also poke holes in the film’s scant worldbuilding. The audience is never given much info about the afterlife infrastructure or why Will must carry out his role in the middle of nowhere. That’s not to condone the over-explanation of a premise, but a few more details may have done well to flesh out the premise and alert us to the stakes at hand ahead of the interviews. These are not make-or-break issues so much as minor blemishes on a largely beautiful work.

“Nine Days” is a startlingly confident debut for Oda. The concepts are cleverly executed, the emotional content is first-rate, and the performances are highlights in the careers of nearly every actor involved. The film has had a protracted release following its premiere at Sundance 2020, but rest assured that it is worth the wait.