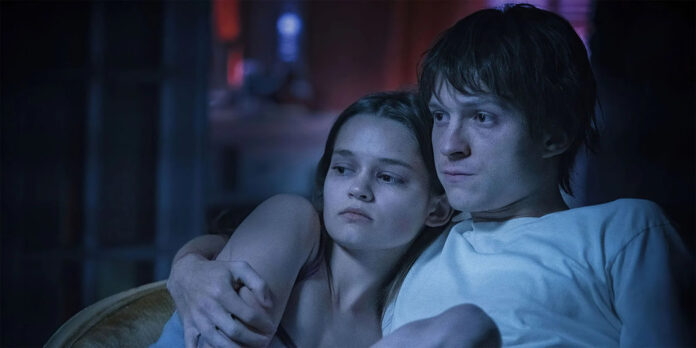 THE STORY – The wild journey of a disenfranchised young man from Ohio who meets the love of his life, only to risk losing her through a series of bad decisions and challenging life circumstances.

​There’s been a lot of hype around Anthony and Joe Russo’s first big non-Marvel movie since their superhero films’ success. “Cherry” certainly seemed like a promising project – between the casting of “Spider-Man” star Tom Holland and the juicy source material of Nico Walker’s 2018 novel. Unfortunately, despite Holland’s best attempts, it’s a convoluted mess that feels like several different films stitched together into one Frankenstein’s monster of a movie.

The screenplay by Angela Russo-Otstot and Jessica Goldberg can be split into three parts: the beginning, the army, and the drugs and bank robbing. Each one has a few decent moments, but the flow of the film has serious issues.

The titular role is a rougher one than audiences are used to seeing Holland in, even compared to his character in Netflix’s “The Devil All the Time.” At the beginning of the film, Cherry is attending college, and despite having a girlfriend (Kelli Berglund) at another school, he’s instantly intrigued when he meets Emily (Ciara Bravo). Unfortunately, their relationship is underdeveloped and there’s very little to convince us that they’re more than your typical ill-fitting college romance.

Bravo is all wide-eyed looks and simpering, though that’s partially the fault of the script. For most of the film, she seems to be giving either too much or too little. When they momentarily break up, Cherry signs up for the army, transitioning into the second part. This whole section, from basic training through to combat as we see him become an army medic, has an almost whimsical feel to it. It’s definitely the most visually interesting part of the film, despite odd choices like words appearing on screen when they’re being yelled at in training and the already infamous scene of Cherry jerking off.

After he returns home from war, Cherry struggles with PTSD and gets addicted to drugs. After his now-wife Emily also gets addicted, they begin robbing banks to pay for their expensive drug habit. The film struggles with showing the passage of time and with striking a consistent tone.

Normally, I wouldn’t give away this much of the plot in a review, but it was heavily featured in the trailer and the descriptions of the film largely revolve around its last section. At two hours and twenty minutes long, fatigue will likely have already set in by the time you reach its third act.

Despite the screenplay issues, including heavy use of narration and the frequent breaking of the fourth wall, the real issues lie in the direction, editing, and cinematography. There’s a lot of use of slow motion, heavy instrumentals, and a hazy look that seems to be trying to convince the audience that the film is serious. They throw in every technique known to filmmakers: funky lighting, different camera angles, dolly zooms, Dutch tilts, jump cuts, freeze frames, and fading audio. (I’m sure that’s not even an exhaustive list.) It almost feels like a short film made by a film major in college to prove that they can do fancy movie effects.

To its credit, the film does try to address some real issues, particularly regarding veterans and PTSD. “Don’t ever join the fucking army,” Cherry advises, and the message certainly comes through. It critiques how army recruits are treated in training and how the government fails to care for them and their mental health when they return to the United States after serving.

Holland is clearly trying his hardest to save this movie with his performance, but unfortunately, he can’t overcome the material. He has several impressive dramatic scenes, and his American accent continues to be impeccable. In some ways, it feels like this film is his “Beautiful Boy,” except that “Cherry” is much worse and Timothée Chalamet arguably got a better role.

“Sometimes I wonder if life was wasted on me,” Cherry tells the audience at one point in the film. This story was certainly wasted in this adaptation, as the book actually got good reviews and was successful when it was released. Despite some interesting messaging that carries over from the book and Holland’s good performance, the film can’t seem to get out of its own way. The main takeaway of “Cherry” is that being able to make a good superhero film doesn’t mean you can direct a good war and crime drama.