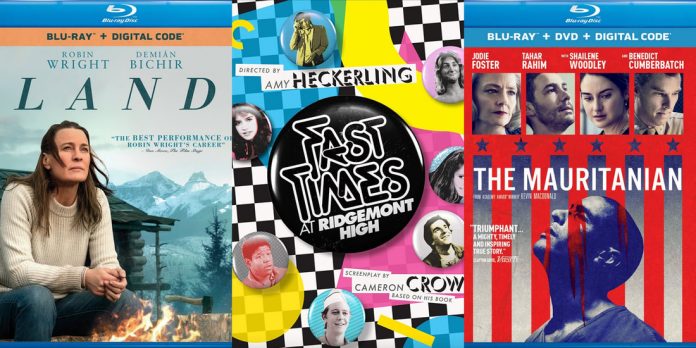 This week, there are quite several exciting Blu-ray releases from a variety of different genres, from new releases and 4K upgrades of 2000s classics to films ranging from the 40s to the 80s.

​The Criterion Collection is releasing two films from female directors on Blu-ray this week. The first is the 1982 coming-of-age comedy “Fast Times at Ridgemont High,” directed by Amy Heckerling and written by Cameron Crowe. The film stars Sean Penn, Jennifer Jason Leigh, Judge Reinhold, Robert Romanus, Brian Backer, and Phoebe Cates. This features a new, restored 4K digital transfer supervised by Heckerling. This release includes an audio commentary track with Heckerling and Crowe from 1999, the television version of the film from the 1980s, a new conversation with Heckerling and Crowe moderated by filmmaker Olivia Wilde, the 1999 documentary “Reliving Our ‘Fast Times at Ridgemont High'” featuring interviews with the cast and crew, an audio discussion with Heckerling from 1982 at the AFI, an essay from film critic Dana Stevens, and a newly written introduction from Crowe. Talk about a stacked release!

The other Criterion coming out this week is Dorothy Arzner’s 1932 film “Merrily We Go to Hell,” starring Fredric March and Sylvia Sidney. This features a new, restored 4K digital transfer, along with the 1983 documentary “Dorothy Arzner: Longing for Women” by Katja Raganelli and Konrad Wickler and a new video essay by film historian Cari Beauchamp.

​Coming from Shout Factory’s Scream Factory label, we have the 1976 version of “King Kong.” Directed by John Guillermin, this film stars Jeff Bridges, Charles Grodin, Jessica Lange, Rene Auberjonois, and Jack O’Halloran. This release includes two cuts of the film: the 134-minute theatrical cut and the 192 minute extended television cut. Also included in this release are two audio commentary tracks, over 45 minutes of new interviews with the cast and crew, image galleries, and more.

​Finally, the Warner Archive Collection has several releases coming out this week. First is the 1947 film “They Won’t Believe Me,” directed by Irving Pichel and starring Robert Young, Susan Hayward, and Jane Greer. This release features a new 4K restoration from Nitrate Preservation Elements.

Another Warner Archive release this week is the 1946 Best Picture Oscar nominee “The Yearling.” Directed by Clarence Brown, this film stars Gregory Peck, Jane Wyman, and Claude Jarman Jr. This includes a new 4K restoration from the original technicolor negatives, along with a radio broadcast and an animated short from the time period to pair with the film.

This week, I rewatched what I think is one of the best films ever made that also has a terrific release from the Criterion Collection that I don’t think is brought up enough when discussing essentials in the collection: 1979’s “All That Jazz.” Directed by Bob Fosse, this film stars Roy Scheider, Jessica Lange, Ann Reinking, Leland Palmer, Cliff Gorman, and Ben Vereen (among others). For those that don’t know, the film is an autobiographical work examining Fosse’s career, relationships, and ultimately his massive heart attack following overworking himself editing his previous movie “Lenny” while also directing and choreographing the original Broadway production of “Chicago.” Similar to Fellini’s “8 ½” before it, the film reflects on the creative process and how interpersonal relationships are affected with fantasy sequences (in this film in the form of musical numbers). It’s a masterpiece that I think everyone should see.

As far as the Criterion release, it looks stunning with a 4K digital restoration. It is also packed with supplemental features, including commentaries, new and archival interviews, on-set footage, and documentaries about both Fosse and the film itself. It is the perfect release for this perfect film that I would highly recommend people not only watch but make a priority as a Criterion Collection must-have.