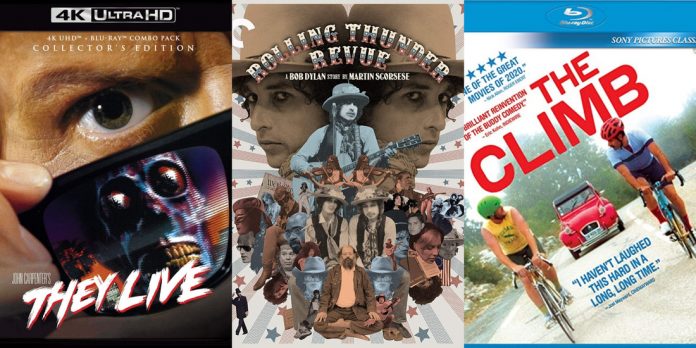 This week, there are quite a few new and exciting releases coming out to add to the 2021 slate from various labels, genres, and time periods. And all Blu-ray debuts, so let’s get started!

There are a few 2020 releases coming to Blu-ray this week that I wanted to highlight. First, we have the comedic thriller “The Kid Detective,” directed by Evan Morgan. The films stars Adam Brody, Sophie Nélisse, Sarah Sutherland, Jesse Noah Gruman, and Jonathan Whittaker. Kino Lorber is releasing the critically-acclaimed Italian film “Martin Eden.” The film is directed by Pietro Marcello and stars Luca Marinelli, Vincenzo Nemolato, Marco Leonardi, Carlo Cecchi, Lana Vlady, and Aniello Arena. Finally, we have the Blu-ray release of the indie “The Climb,” directed by Michael Angelo Covino and starring Covino, Gayle Rankin, Judith Godrèche, Talia Balsam, and Kyle Marvin. The release also includes an audio commentary track, deleted and alternate scenes, and the original short film.

This week, I wanted to recommend what I think is the best looking film in my collection, the most impressive restoration of an older film that continually takes my breath away, and that is the Criterion Collection edition of “Do the Right Thing.” Of course, this is the 1989 masterpiece directed by Spike Lee and featuring an all-star ensemble including Lee himself, as well as Danny Aiello, Ossie Davis, Ruby Dee, Richard Edson, Giancarlo Esposito, Bill Nunn, John Turturro, Samuel L. Jackson, Rosie Perez, a young Martin Lawrence, and many more. The film depicts a hot summer day in a Brooklyn neighborhood and the racial tensions that bubble up to the service as the day goes on.

Not only does this edition contain a 4K digital restoration (the best the film has ever looked), it is also an impressive release as a set devoted to the film. The restoration is beautiful, with the film’s warm hues beaming off the screen and the crisp film looking good as new. The edition itself comes in a rather thick digipak with a vibrant red cover and packing devoted to every aspect of the film with its art direction. Being a large set, it is packed with supplements across two Blu-ray discs. It includes an audio commentary, a making-of documentary, interviews, the original Cannes film festival press conference, deleted and extended scenes, and excerpts from Lee’s director’s journal from the making of the film.

There is a 4K release of this film coming out next month, so if that is your preference for physical media, I understand. However, if you only collect Blu-ray or are a fan of the Criterion Collection, this disc is a must-own. Not only is this film a masterpiece that everyone should see, but this is a stacked release for the film that looks incredible on every front and is worth the premium cost. It is honestly what should be expected for every boutique Blu-ray release.

​Will you be picking up any of these releases? Let us know in the comments section below or on our Twitter account.

Share
Facebook
Twitter
Copy URL
Previous article
The Next Best Picture Podcast – Interviews With “One Night In Miami” Star, Kingsley Ben-Adir & Cinematographer, Tami Reiker
Next article
The Paths To best picture For “The Trial Of The Chicago 7”