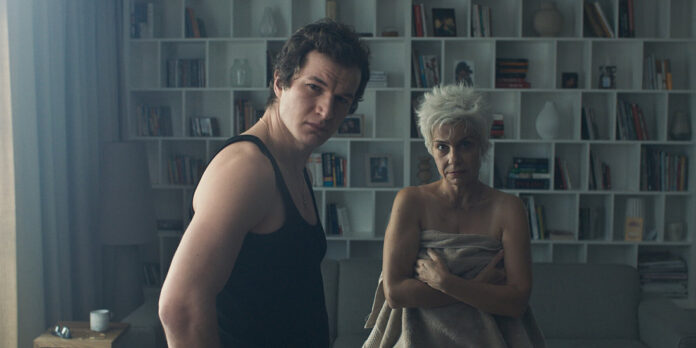 THE STORY – Friendly and Christ-like Ukrainian masseur Zhenia enters the lives of wealthy Polish residents in a cookie-cutter neighborhood. These residents seem to have it all, but they’re all bogged down by inner sadness and frustrations. But through Zhenia’s healing hands and a calming look in his eyes, he transports these people to other worlds and takes away their pain.

​​Do you ever want a really good massage? You know, the one that will take all the pain and stress away, leaving you with a refreshed outlook on life? Or perhaps you need to look a little deeper, so much so that it transports you to a whole different place, and it allows you to heal even more. If so, I know just the man for you.

There are multiple stories in Malgorzata Szumowska and Michal Englert’s “Never Gonna Snow Again” (“Śniegu już nigdy nie będzie”), but at the core is a friendly, mysterious, and almost Christ-like masseur named Zhenia (Alec Utgoff). He emerges from a misty forest, with a collapsable bed slung over his shoulder, and heads into a Polish town, where lights begin to flicker or turn off in his presence. He walks into an office, and we learn he’s from Pripyat, Ukraine, where the Chernobyl disaster happened when Zhenia was 7-years-old. A comment is made that maybe he’s radioactive, which might explain some of the subsequent events: a clock’s ticks start slowing down, the official that Zhenia is speaking to tells him he feels strange around him and that he needs his help, and with the touch of Zhenia’s hands, the official falls into a deep trance. Zhenia stamps his papers and is off on his way, but not before a record player begins playing music magically.

It’s a strange opening but perfectly sets up this film. Soon after, Zhenia heads to a gated neighborhood and begins massaging and captivating the attention of wealthy residents. They seem to have it all from the outside, but Zhenia’s hands reveal the truth: many are plagued by sadness, sickness, alcohol, and drugs. With each massage, he has these residents in the palm of his hands, literally. Some want even more, so Zhenia hypnotizes them, and they’re each transported to the forest setting that we see at the beginning of the film. The film has a very “Edward Scissorhands” vibe to it — an outsider coming into their mundane, prosperous lives and captivating them all.

These wealthy people are totally out of touch, and many funny moments come from his daily interactions with them. One woman (Maja Ostaszewska) proudly tells Zhenia that her son is so independent he can order Uber Eats all by himself. Another woman (Katarzyna Figura), obsessed with her three bulldogs, asks Zhenia to massage one of them. Perhaps they need a little hypnosis too? The women in this neighborhood also begin to lust after him, leading to some even more silly moments. Though humorous, these interactions also do a great job of showing the contrast between the residents’ lives and Zhenia’s. We see his drab Cold War-era neighborhood and his tiny apartment with few furniture items inside, while these residents live in massive white homes filled with fine art, glorious kitchens, and every gadget they can get their hands on. The film even shows the struggles of being an immigrant. There’s a moment where one housewife complains about Ukrainians before she quickly says Zhenia isn’t like those Ukrainians. It’s brief but enough to remind us of the problems we continue to see in our world.

Though we see him in almost every scene, we still don’t really understand who Zhenia is, aside from several flashbacks of him as a child with his mother. This seems to have a hold on him, especially since his mother did not survive the radioactive disaster, and it may be another clue as to why he has powers of some sort. Our hero’s journey is cut abruptly during a magic performance at a school event, and it might leave some viewers a bit unsatisfied. Nonetheless, Utgoff plays into the mystery very well, always making you question him and what his motives are while also having such a kind and loveable presence. Many loved him as Slurpee lover Dr. Alexei from “Stranger Things,” and it seems like he’s found his groove with soft-spoken characters.

Szumowska and Englert tend to linger on Zhenia’s face in certain scenes, which really amplifies those moments. It makes you stare deep into his eyes, making you feel like you’re about to be cast under his spell, too, like all the other residents. There is also a significant focus on lighting throughout this film. The greys stand out to show the drab lives of these rich people, and when light is amplified, it adds so much more to a scene.

“Never Gonna Snow Again” may leave viewers a bit confused, maybe even a little unsatisfied, with our protagonist’s arc, but Utgoff is delightful from start to finish. The film has quite a bit to say about immigrant lives, wealth, happiness, and even climate change, thanks to its title, and Szumowska and Englert’s script does a great job of tackling each. ​