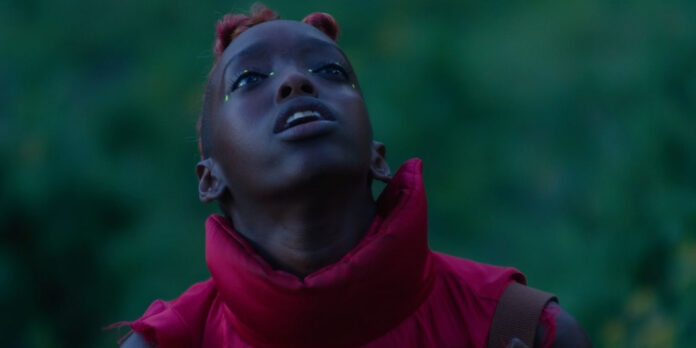 THE STORY – A group of escaped coltan miners forms an anti-colonialist computer hacker collective in the hilltops of Burundi. They soon attempt a takeover of the authoritarian regime that’s exploiting the region’s natural resources — and its people.

Technology can be a fascinating arena of discussion due to how broad its scope can be and where it ultimately touches. It’s a subject that can intersect between a vast array of topics and genres with a rich commentary to cast. It holds even more value when it speaks to a perspective that may seem underserved in the global landscape, giving voice to a communal viewpoint that is distinct yet profound in its analysis. It’s a shame that, to date, African cinema has not been given the platform of discovery and admiration that other offerings from international cinema have enjoyed. However, that does not mean intriguing works are lacking from this region. “Neptune Frost” is a bold and arresting showcase of current issues that can captivate as well as confound.

Set on the hilltops of Burundi, a small group of miners for an exploitative company break ranks to form their own isolated community. This is done with ambitions of hacking into several institutions owned by colonial interests in an effort to expose corruption and invite revolution. This band of rebels soon crosses paths with Neptune (Cheryl Isheja and occasionally Elvis Ngabo), an intersex traveler that has voyaged across time and space. They arrive at a moment of chaos stretching across the universe, and their presence stirs more to action. Bonding with one of the local miners, Matalusa (Bertrand Nintereste), creates an even more powerful connection that exposes hidden truths in this complex world.

Directors Saul Williams and Anisia Uzeyman craft some genuinely striking imagery, displaying a vibrant sense of color that encases every inch of the frame. The aesthetics indulge in a low-fi tone, with much of the technological set-pieces cobbled together in a scrappy manner that feels textured and authentic. The designs have a simple artistry applied to them that exposes a grand aura of creativity. This atmosphere is given even more detail by William’s score, a kinetic electronic soundscape that firmly establishes the otherworldly setting. One may not always be sure exactly what the intentions are of every story beat. Still, there’s no denying the unique environment that has been established that’s bursting with vivid and hypnotic energy. What’s demonstrated is a stylized and compelling locale that is quite inviting.

At the same time, the enormity of their vision is oftentimes so overwhelming to the senses that it is easy to get lost in the sea of thematic exploration. The dialogue carries a poetic lyricism that can be admired but also can become convoluted and difficult to track. This is obviously intentional, but the obtuseness of the plot can leave the world-building muddled in the execution. One can marvel at this creation as much as be utterly lost trying to interpret it. The writing is meant to convey a stronger mediation on ideology than character, with critiques on the nature of fighting oppression and revealing new identities. The queer lens that underlines every theme is a wonder to see unfold, but it’s all at the service of a narrative that abandons traditional structures. This isn’t to say such a method is inherently wrong, but it can be an acquired taste, and the film does struggle to become an engaging exercise in its storytelling.

Ishei holds the attention of the viewer every moment she is on screen. The effortless regality she brings to a character that is reserved yet full of alluring mystery is an engrossing portrait, and her performance keeps one invested. There is sweet chemistry she shares with Nintereste, who also finds a commanding tenor in his portrayal that is effective in authenticating the bond between them. He possesses both a hardened edge, yet gentle empathy that gives layers to a man just discovering the opening avenues around him. Both Ishei and Nintereste and representative of an ensemble that may not consistently be delivering outstanding turns, but everyone exemplifies the peculiar fabric of these surroundings. It’s a capable ensemble that fills out the piece nicely.

It is certain that “Neptune Frost” is not a film that everyone will embrace. Even for those that respond to its expressive messaging and filmmaking, the disorienting narrative more than occasionally can disrupt the natural flow and create a frustrating ordeal. Still, the ambition has to be admired, and to see such flamboyant displays in service of a provocative investigation on how technology can play the role of both savior and oppressor, especially in locations with a fraught history of novel ideas being met with hostility, is a marvel to behold. This is not a work meant to be easily digestible, but it assuredly is one that makes a lasting impression.