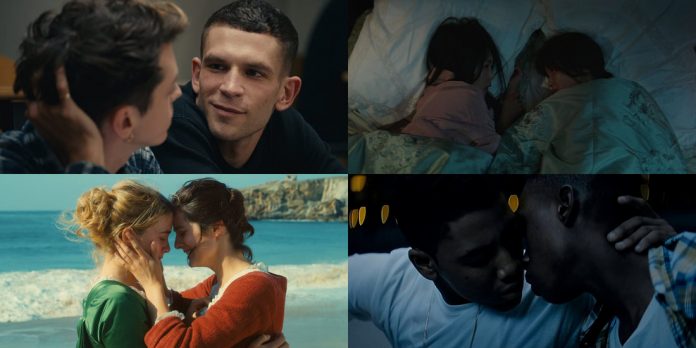 It’s Pride Month! Truthfully, it’s felt like a strange month to be celebrating Pride when so much of the world seems to be on fire. But in terms of our monthly Quarantine Film Festival, it offers an exciting opportunity to tell even more diverse stories and try to glean what lessons we can from them. So come join me on our journey, curated from the Big Three streaming services.​

Let’s start the day off with a blast of punk energy from Sean Baker. “Tangerine” tracks a day in the life of transgender sex workers, Sin-Dee Rella and Alexandra. Sin-Dee is just back from a 28-day stint in prison, and when she finds out from Alexandra that her boyfriend and pimp Chester has been cheating on her with a cisgender woman, she goes on a rampage through the streets of LA to find them. Shot entirely on an iPhone, “Tangerine” is bursting with enough life and energy to fill ten more films but never shies away from the more heartbreaking aspects of these women’s lives. As Sin-Dee and Alexandra, Kitana Kiki Rodriguez and Mya Taylor turn in live wire performances, breaking new ground for trans performers in the process.

The surprise winner of the Best Picture Oscar, Barry Jenkins’ film is one of extraordinary empathy. We follow a young Black man, Chiron, through three stages of his life, tracking his relationships with his crack addict mother and the closest thing he has to a friend, Kevin. Chiron and Kevin are fascinating case studies in performative masculinity, each acted to perfection by a trio of actors who manage to create throughlines even though they worked completely independently. Jenkins’ three-act screenplay (adapted from an un-produced play by Tarell Alvin McCraney), turns each section of Chiron’s life into a perfect little one-act play, and hardly puts a foot wrong. It accumulates as it goes, culminating in the third act where Chiron and Kevin meet again after having been separated for about a decade; where lingering gazes and interrupted conversations take on the rhythms of a thriller in the most incredible way. With stunningly gorgeous cinematography by James Laxton, and a mesmerizing score by Nicholas Britell, “Moonlight” is one of the most beautiful films ever made, both aesthetically and thematically.

Arguably the best film of last year, Céline Sciamma’s period piece features some of the best cinematography of the last decade, courtesy of Claire Mathon. The story is simple: Marianne is hired to paint a portrait of Héloïse to be given to her intended husband. But given Héloïse’s complete lack of desire to pose, she must do so in secret. As the two grow closer and more intimate, Marianne’s portrait changes and captures more and more of Héloïes’s likeness. In addition to being one of the best romances in recent memory, it’s also one of the great films about painting, utilizing lots of drafts of Marianne’s portrait of Héloïse to show how her feelings toward her subject evolve. There isn’t a single piece of this that isn’t perfectly calibrated, and when the final scene comes, it will leave you breathless. “Portrait of a Lady on Fire” is a true masterpiece of cinematic art.

Let’s take a little breather from all the drama with this delightful documentary from the ‘60s. An inside look at the 1967 Miss All-America Camp Beauty Contest, “The Queen” is short and sweet but provides a fascinating time capsule of drag pre-Stonewall. At only 68 minutes, there’s not really enough time to get to know the contestants, but simply watching them all chat about their lives and prepare for the contest is compelling. But all that pales in comparison to the legendary evisceration of eventual winner Rachel Harlow by one Miss Crystal LaBeija, who has had enough of basic white queens winning while stunning Black queens like herself had to settle for being runners-up. Director Frank Simon keeps everything very contained, not giving much historical context for anything, but Crystal’s broiling rage tells you all you need to know.

We are living in a moment where grassroots protests are sweeping the nation. Writer-director Robin Campillo was there in the early ‘90s when a group of young people in France decided to band together to raise awareness and fight for those afflicted with AIDS, and it shows. A near-perfect braiding of the personal and the political, “BPM” (or “120 battements par minute” in the original French) is stunning in how it’s able to shift from a macro overview of the movement – the committee meetings are fascinating to watch – to the most micro, eventually focusing on the HIV positive, Sean (played by Nahuel Pérez Biscayart in an incredible performance). Sean, a veteran of ACT UP Paris, ends up in a relationship with HIV negative ACT UP newcomer, Nathan, and I don’t think I’ve seen a more truly intimate gay relationship in any other film. As a story taking place at the peak of the AIDS crisis, “BPM” is obviously heading towards tragedy, but it’s also a heartening reminder of how a community can band together to fight for change and enrich each other’s lives. It’s a film we need now more than ever.

Cheryl Dunye’s pseudo-documentary was the first feature film directed by an out Black lesbian, and it’s a fascinating meditation on Black women in film. Cheryl (Dunye herself) works at a video store in Philadelphia with her best friend, Tamara, with whom she also makes films – although currently, that means serving as videographer for local events. Cheryl becomes obsessed with a Black actress from the ‘30s only known as “Watermelon Woman”. Her journey to discovering the truth about this woman’s life serves as a voice for the dozens of women, gays, and people of color whose history has been erased by Hollywood over the years. Stylistically, it fits in with every other independent film of the mid-90s, but thematically, it’s far richer.

Time to get your freak on for the Pride Midnight Movie. Park Chan-wook’s scintillatingly devious riff on Sarah Waters’ novel, “Fingersmith,” is one that it’s best to go into as blind as possible. Without giving anything away, it’s about a con artist posing as a Count to cheat a wealthy Lady out of her inheritance and the pickpocket he hires to pose as the Lady’s new handmaiden. The twists and turns it takes from there are wildly unpredictable and great fun to watch, and captured by a filmmaker at the absolute top of his game. No one could have made this film but Park Chan-wook, and he couldn’t have made a better version of it than this. The cinematography, editing, design, and score all combine flawlessly in service of an incredibly smart, densely layered screenplay. The fantastic, layered performances are even more stunning to watch than the incredible images. You go into each scene of “The Handmaiden” expecting one thing only to end up getting something completely different, creating one of the most ravishing cinematic experiences of the last decade.

Check out Day 1, Day 2 & Day 3 of our NBP Quarantine Film Festival programming if you’re looking for more themed options. What films have you been watching at home to celebrate Pride Month? Any suggestions for an upcoming theme day for our stay-at-home quarantine film festival? Let us know in the comments section below or on our Twitter account.