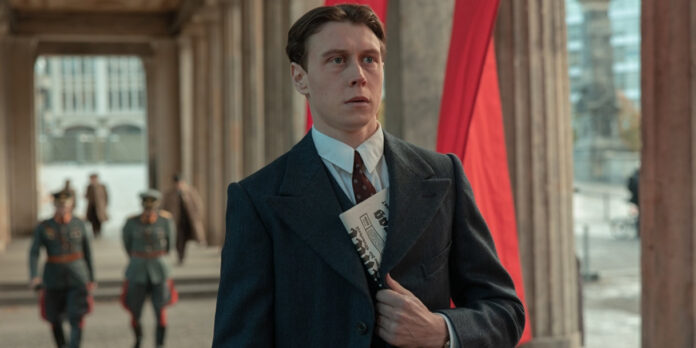 THE STORY – Set in the fall of 1938, Hitler prepares to invade Czechoslovakia, and the government of Neville Chamberlain desperately seeks a peaceful solution. A British civil servant and a German diplomat, former classmates, travel to Munich to discuss peace.

​The subject of World War II will always be one of endless fascination for storytellers. The backdrop of war itself has consistently been a setting that inherently establishes an aura of conflict and intrigue, and it stands to reason that the most well-known global combat would be a persistent foundation. Given the strict moral divisions of each side, it can sometimes be challenging to find the nuance in these stories while also being true to the motivations these characters would have been given. Some have found that element, and “Munich: The Edge of War” is another one that attempts to examine the more complex political machinations that were at play. The results are not particularly extraordinary, but there is an engaging execution that is somewhat effective.

At the time the film takes place, the war hasn’t yet broken out, but national tensions are severely strained. It’s 1938, and Germany has already rallied its support behind Hitler and is about to invade Czechoslovakia, which would undoubtedly begin the fighting. Diplomatic negotiations are employed, as England’s Prime Minister Neville Chamberlain (Jeremy Irons) mounts any defense he can to prevent the bloodshed. As the politicians gather to arrange a peace summit, a conspiratorial plot is happening in the shadows. German intelligence officer Paul von Hartman (Jannis Niewöhner) has information that reveals the true intentions of Hitler’s agenda that is not known to the rest of the world. Von Hartman feels compelled to release this information as an effort to delay Germany’s amassing power. In doing so, he elicits the help of Hugh Legat (George MacKay), a former classmate at Oxford now working under Chamberlain. The objective to procure and conceal this valuable information is a dangerous act that all parties face with a fragile determination.

Admittedly, the start of the film gets off to a rough start. The overall filmmaking displayed by director Christian Schwochow comes across as messy in its execution, with the abundance of handled shots giving way to a chaotic editing rhythm. It’s a difficult opening that eventually settles once the narrative’s main thrust reveals itself. From that point, the creeping tone of espionage becomes a more engaging style, and the anxiety that is crafted from these sequences feels more potent and more deliberate in presentation. His efforts never rise to the level of anything extraordinary, but the directing does manage to capture a persistent energy as it peers into this dark world full of mystery and darkness. One only wishes it were more evenly applied throughout.

The same is mirrored in Ben Power’s screenplay, which similarly struggles to make a first act that is entirely cohesive. The dueling viewpoints in England and Germany greatly favors the latter, made especially clear as it does not cater to scenes of tiresome domestic drama or more familiar wartime backdrops. It’s the scenes with von Hartman that keys into a unique perspective as it analyzes a country already engulfed in fascism but is teetering on the edge of becoming so much worse. It’s a more fascinating dichotomy that can be explored, even when the material dips into on-the-nose contemporary comparisons. It is an obvious commentary, but a prescient one nonetheless, and the storytelling still maintains a suspenseful structure that is captivating. The nuance isn’t equally applied to every moment, but one does find the mounting pressure to be utilized in a compelling manner.

MacKay has shown himself to be an incredibly capable performer in the past, but this role does not employ all of his skillset. There’s an everyman quality he is required to inhabit as a somewhat ordinary citizen that is drawn into a treacherous web. While that tenor is struck, he doesn’t provide much else here that is beyond serviceable. Niewöhner has a more complicated character to play and does give a more layered performance. It’s an interesting arc to plot an individual who believed in the potential strength Hitler’s party could give to an ailing German and now moves with a swift conviction to topple it. That persona may be difficult to root for entirely, but the notes in his portrayal are grounded in a way that makes him a fascinating presence. Irons also does fine work, playing with the legacy of Chamberlain’s fecklessness and channeling a flawed leader trying to maintain the peace. It’s an endearing turn that is completely inviting, even if it is not an example of his finest hours.

There’s an internal clash at the heart of “Munich: The Edge of War” that seems to mirror the one being played out on the screen. Just as its own plot tracks the changing tides of war, the film rages within itself to find the most appealing avenue to tell its story. It labors with difficulty in the beginning to become an alluring piece, letting the more mundane elements take center stage and strain engrossment. Still, there is a quality that becomes more intriguing as things progress, and the strain brought about in such a stressful scheme does the job of entertaining. With decent performances, which range from impressive to functional, this becomes another slightly above-average entry in the boundless sea of films contemplating the second World War.