“MOWGLI: LEGEND OF THE JUNGLE” 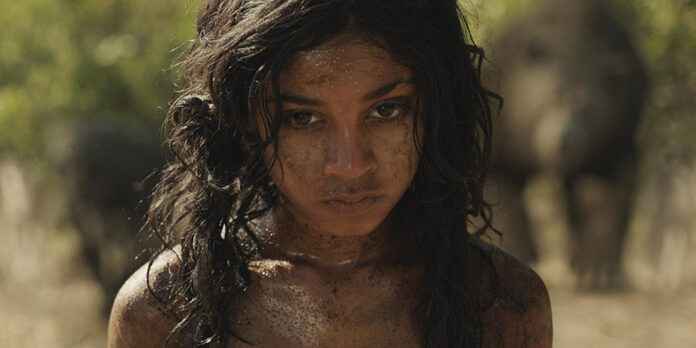 THE STORY – Human child Mowgli is raised by a wolf pack in the jungles of India. As he learns the often harsh rules of the jungle, under the tutelage of a bear named Baloo and a panther named Bagheera, Mowgli becomes accepted by the animals of the jungle as one of their own, but the fearsome tiger Shere Khan doesn’t take a liking to him. But there may be greater dangers lurking in the jungle, as Mowgli comes face to face with his human origins.
​
THE CAST – Christian Bale, Cate Blanchett, Benedict Cumberbatch, Naomie Harris, Andy Serkis, Matthew Rhys, Freida Pinto & Rohan Chand

​​​Premiering only two and a half years after Jon Favreau’s Oscar Winning “The Jungle Book,” “Mowgli” needed something seriously different to make itself stand out from the Disney remake. And it is. It is very, very different. That’s both a good thing and a bad thing. Director Andy Serkis follows the same general backbone as did the Disney film (a young boy is raised by wolves in the jungle and hunted by a vindictive tiger), but pretty much differs in every other fashion.

Marketed as “the darkest version of The Jungle Book yet.” That is the understatement of the century. Chances are, the reason Warner Bros. shuffled the film off to Netflix was to avoid the PR fiasco of parents bringing their children to what they assume is a kid’s movie only to witness a bloodbath. And that’s the main issue here. “Mowgli” much like its titular character is in the midst of an identity crisis. On one hand, it boasts the bright colors, and cute sidekick animals of a children’s film, as well as its fair share of slapstick comedy. On the other hand, it stabs, shoots, maims, and decapitates its animal characters with wild abandon, and is packed full of genuinely stressful and frightening moments. It certainly feels too dark for a children’s film, and yet doesn’t feel “adult” enough to be something else. It’s trapped in a sort of purgatory. And perhaps that is the best way to evoke Kipling. After all, his stories tended to lean more towards Sam Peckinpah than Walt Disney. But the result here is something of an odd viewing experience.

Alongside its dramatical tone, Serkis’s version does its best to differentiate its characters from previous onscreen incarnations. Christian Bale’s Baguira (voiced with his Batman voice) is far less paternal than previous versions, while Baloo the Bear (voiced by Serkis’s Lord of the Rings “Meat’s back on the menu, boys!” Orc voice) is more R. Lee Ermey drill instructor than cheerful sing-song character. The plot meanwhile lingers extensively on the outside world, the world of man. And for a while, we see why Mowgli might be tempted to become a human. Whereas the Disney version takes it for granted that staying in the jungle would be preferable, “Mowgli” genuinely asks us to explore the implications of these differences between worlds.

Differences between cinematic incarnations aside, what works? The tone does, sometimes. Increased danger and violence means higher stakes. The film will leave you on the edge of your seat at times. Serkis’s def camera work (sometimes mimicking the movement of animals, such as a twisting snake) whips the viewer along through tense chase scenes that will terrify children. The visuals are also lovely. Cinematographer Michael Seresin (“War For The Planet Of The Apes”) captures stunning visuals, showcasing varied colors and wide vistas. And unlike Favreau’s incarnation, the images aren’t completely CGI-generated. And of course there’s the CGI. Not every CGI character is seamless (some of the wolves look particularly unfinished), but other characters, such as Bale and Serkis’s look spectacular enough to make the film a threat for a Visual Effects Nomination. The sound effects are vivid enough to place the viewer right in the jungle, especially the sound of Cumberbatch’s tiger claws, and the grinding of dirt and gravel beneath his feet. And first-time actor, Rohand Chan is a stunner, showcasing childhood wonder, anger, and grief with equal aplomb. He’s a breakout star who deserves a bright onscreen future.

What doesn’t work? Much of the talented ensemble cast is wasted, especially Freida Pinto in an entirely silent role. And as mentioned above, the tone is all over the place. Some of the film’s darkest moments seem unnecessarily mean-spirited. Trust me…there is a memorable scene that you won’t forget but may want to. I kept waiting for the “oh look! He’s learned that he doesn’t have to kill! He’s learned mercy” NOPE. This is jungle rules, folks. Kill as many as you can. Become the alpha. Slaughter the weak. If Ann Raynd wrote a bedtime story, it would be Mowgzli. It’s the closest thing to a 180 from “Won’t You Be My Neighbor?” you’ll find this year. It certainly gets points for being different though.

All that aside, the film deserves praise for trying something different with Kipling’s material than what we’re used to. Introducing this level of darkness to what has traditionally been regarded as a children’s movie is a bold move. And sometimes it pays off. There is enough working here to allow the film to be worthwhile, and Serkis continues to show promise as a director. “Mowgli” has the bare necessities, but it would be nice if it had been able to go above and beyond that.