Have We Underestimated The Strength Of “First Reformed” In The Oscar Race? 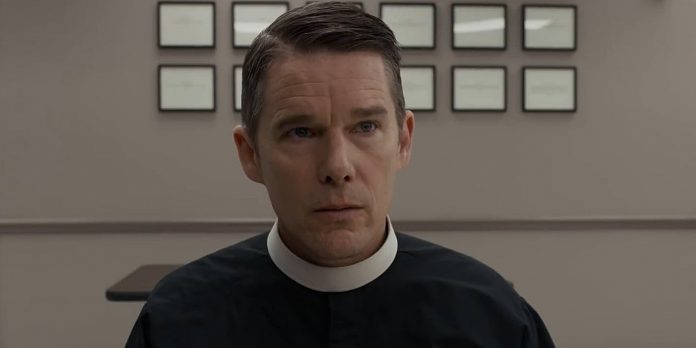 ​The 2018 awards season had its first three stops this week: the Gotham Awards (Monday night), the National Board Of Review (Tuesday) and the New York Film Critics Circle (Thursday). “Eighth Grade,” “Roma,” “Green Book” and “If Beale Street Could Talk” were among the winners, but one could argue no film had a better week than A24’s “First Reformed.” The psychological drama from industry veteran Paul Schrader won Best Screenplay prizes from all three groups and Ethan Hawke won Best Actor from the Gotham Awards and the New York Film Critics Circle. Schrader’s victory in the screenplay categories was the only sweep of the week, and having worked for decades in the industry without ever receiving a single Oscar nomination – that’s right, neither of his screenplays for “Taxi Driver” or “Raging Bull” was nominated at the Oscars – one has to wonder if his time for Oscar glory has finally come. These results indicate Schrader could be positioned for a win, not just a nomination.

Well, not so fast. Since the expansion of the Best Picture category in 2009 under the preferential system, no screenplay winner in either Best Original or Adapted Screenplay has won without a corresponding Best Picture nomination. While many have been coming around to the idea that Paul Schrader’s screenplay and Ethan Hawke’s tortured performance could be recognized with Oscar nominations, not many are citing the film as a potential Best Picture nominee.

Paul Schrader has an opportunity, like James Ivory last year with “Call Me By Your Name,” to be rewarded by his peers within the Academy for his prolific filmography. One could argue giving him an Oscar would be a cumulative prize for his entire career, which has endured through ups and downs as one of the strongest voices in the film industry. The narrative to reward Schrader beyond a nomination with a win in this category is certainly present. However, one would have to go all the way back to 1998 in Best Adapted Screenplay to find a winner that did not receive a Best Picture nomination, “Gods and Monsters,” and 2004 in Original Screenplay, “Eternal Sunshine Of The Spotless Mind.”

While momentum is currently on Schrader’s side, his screenplay will have to go up against the writing in presumed Best Picture contenders “The Favourite,” “Green Book,” “Vice,” and “Roma.” A24’s own “Eighth Grade,” a film starting to pick up its own Best Picture buzz, will compete against “First Reformed” in the screenplay category, too.  Maybe “First Reformed” doesn’t need a Best Picture nomination for Schrader to pull off a win on his own? Or, maybe he won’t win at all and the nomination will be the reward?

In recent years, the screenplay categories have been a place to reward acclaimed filmmakers who may not be winning Best Picture or Best Director, by way of a consolation prize to spread the wealth, if you will. With the exception of “The Favourite,” all of the above contenders I listed in this year’s Best Original Screenplay race, are all written by filmmakers who also directed the movie.

Some examples of this trend include:

“The Favourite” looks likely to be one of the most heavily nominated films of the year. It has the potential for Best Picture, Best Director, three acting nominations, and a slew of technical category mentions (So does “Vice” but we won’t know for sure until the review embargo drops). With such wind in its sails, one will have to wonder if a heavily embraced film like “The Favourite” will be the chosen for the Best Original Screenplay win, despite it not being written by director Yorgos Lanthinmos, or if the strength of Paul Schrader’s overdue narrative and name recognition within the race will prevail, despite “First Reformed” lacking a corresponding Best Picture nomination.

Here are some Screenplay winners that were heavily embraced by the Academy with multiple nominations for their film but they were not the ones who directed the movie, giving precedence to “The Favourite” possibly being victorious…

And I want to reiterate one more time…no Original or Adapted Screenplay winner since 2009 has won without a corresponding Best Picture nomination.

The question we have to ask ourselves is whether or not “First Reformed” can secure a Best Picture nomination along with presumed nominations for Paul Schrader for Best Original Screenplay and Ethan Hawke for Best Actor? If the answer is no, then the mountain seems pretty large for Schrader to climb from a statistical perspective. However, if A24 can give “First Reformed” the push that it needs to secure that coveted Best Picture nomination, then I believe Paul Schrader’s chances will be more secure than ever to win the category on his first nomination.

Just today, the film showed up once again with 4 nominations from the Detroit Film Critics Society in Best Screenplay, Best Actor and now Best Picture/Director. It also managed nominations from the Satellite Awards in Best Picture (Independent), Best Actor and Best Original Screenplay. Should such a trend continue throughout the season, “First Reformed” may be able to go further with the Academy than we initially thought. For such a small (yet brilliant) film and with the potential chance to reward Paul Schrader for a distinguished career, the narrative might just be strong enough to overcome the statistical hurdle.

But, what do you think? Which Oscars are you currently predicting “First Reformed” to receive nominations for? Do you think Paul Schrader can win Best Original Screenplay with or without a Best Picture nomination? Let us know your thoughts in the comments section below.