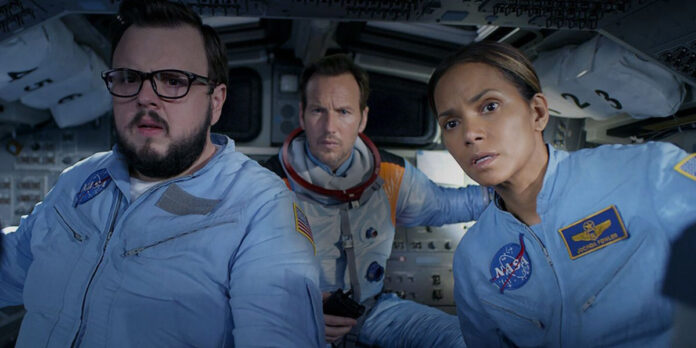 THE STORY – The world stands on the brink of annihilation when a mysterious force knocks the moon from its orbit and sends it hurtling toward a collision course with Earth. With only weeks before impact, NASA executive Jocinda “Jo” Fowler teams up with a man from her past and a conspiracy theorist for an impossible mission into space to save humanity.

​​​​​Disaster movies are an art unto themselves. Coherence typically goes out the window but is often made up for in end-of-the-world thrills and destruction on a mass scale. Who doesn’t love watching cities be laid to waste while eating a giant tub of popcorn? And no man has contributed more to this art form than Roland Emmerich. The director of “Independence Day,” “The Day After Tomorrow,” and “2012” may have as recognizable a style as the likes of Wes Anderson and Quentin Tarantino. At the mere description of “Moonfall,” you know it’s an Emmerich disaster film. As a bonafide fan of the disaster movie genre, I say all of this with love: Give me some great action and imagery that makes me just a little scared for the end of the world, and I’m in. Unfortunately, “Moonfall” is one of Emmerich’s worst offerings, failing to live up to the heights of his own genre. It’s somehow bland, bizarre, boring, ridiculous, and ultimately a waste of time.

Years after a mysterious accident in space that ruined the career of astronaut Brian Harper (Patrick Wilson), a goofy conspiracy theorist named K.C. Houseman (John Bradley) gets his attention. The moon is falling out of orbit, he claims. Not only that, but Houseman thinks that the moon is a megastructure, a massive alien creation centered on a white dwarf star. Soon, the whole world finds out that the moon is falling, and there’s little hope of survival. Harper’s former colleague and now-NASA head, Jocinda “Jo” Fowler (Halle Berry), enlists the men in a last-ditch effort to save the world.

The biggest problem with “Moonfall” is that it’s not very fun. It seems more concerned with explaining the intricacies of its insane plot, trying to make it all make sense, than with giving the audience a genuine thrill ride. There’s plenty of destruction as the moon gets closer and closer to the Earth, but it’s all quite blandly pulled off by Emmerich and his team. The film spends so much time dumping exposition to help us understand how the moon is actually a megastructure and how they’ll reverse the planet’s destruction and not enough time establishing the characters in a meaningful way outside of the banal, laugh out loud dialogue they’re given. And yet, no matter how much time the film’s characters spend trying to explain the plot to each other and to the audience, it gets more and more ridiculous as it goes, culminating in a mind-melting third act that loses the audience altogether.

Meanwhile, the destruction on Earth, arguably the thing that draws an audience into a disaster film, is pretty lame, thanks in no small part because of some uninspiring visual effects work which we’ve seen executed better in other movies from this genre. Sure, there are things like “gravity waves,” whatever that means, and plenty of moon chunks flying through the atmosphere, but none of it is very exciting. None of the characters are interesting or compelling, giving us nothing to care about amidst the chaos. Every piece of dialogue feels like it was written by artificial intelligence trying and failing to understand human speech patterns. “Moonfall” even manages to somehow strip the charisma from the always entertaining Michael Peña, which is not an easy task.

Making matters worse is that “Moonfall” feels like a strange rehashing of “Independence Day” and its inferior sequel. It’s not just that plot beats are similar because most films in this genre resemble this to some degree or another. But it’s how our heroes venture into space and encounter the cause of this disaster that feels all too similar to Emmerich’s previous work. It’s odd to describe a movie about the moon breaking apart and crashing into Earth as unoriginal, but it certainly felt that way. Perhaps my hopes were too high for a film that few expected much from. What did I expect? This was never going to be a Best Picture contender or even a great movie, necessarily. All I wanted was just to have fun. Instead, “Moonfall” felt like an extremely expensive paint-by-numbers discount version of an Emmerich disaster flick. The moon does fall, though, so that’s something.