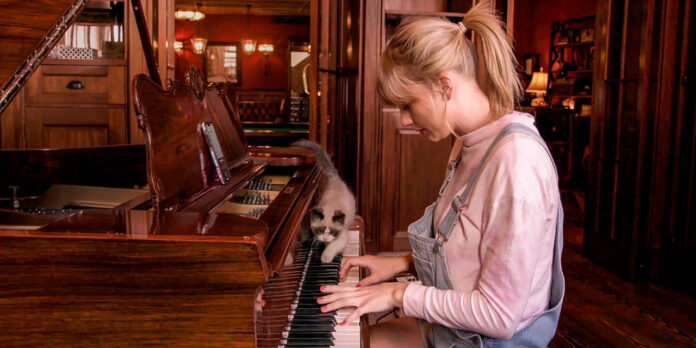 ​​​​​At the beginning of “Miss Americana,” we find Taylor Swift playing the piano with bright pink nail polish and her newest kitten crawling over the keys. She’s reassuringly the same Taylor that fans have known and adored since her first album was released in 2006. And yet, this documentary provides a more close up portrait of Swift than we’ve ever seen before, as it charts her growth from America’s country music sweetheart to the outspoken, business-savvy pop star she is today. Directed by Lana Wilson (best known for her documentary about third-trimester abortions, “After Tiller”), “Miss Americana” is an intimate yet unintrusive look at the life of one of the entertainment industry’s biggest stars.

The documentary is a mix of new footage filmed over the past few years and old home videos and performance footage. Swift is interviewed surrounded by her old diaries (which she published parts of last year in the special editions of her “Lover” CD) and her kitten, Benjamin. We see Swift grow from a little girl receiving her first guitar on Christmas morning to a young woman clad in black sequins and thigh-high boots during the “Reputation” tour. The film loosely sticks to chronological order, often diverging to explore a theme. It stresses Swift’s youth when she was thrust into the spotlight as a teenager.

As you might expect, there are many scenes showing Swift doing what she’s best known for: songwriting. In a very self-aware moment (which the film is littered with), she says that her storytelling, and how she has chronicled her life through her songs, is what sets her apart from other artists. In the film, we see Swift writing songs from both “Reputation” and her latest album, “Lover.” It’s charming to hear early lyrics that were later changed and to see Swift collaborating with Brendon Urie on “Me!”. One of the most magical moments is a scene that moves from Swift writing “Getaway Car” with Jack Antonoff to her performing it onstage.

One of the major themes in the documentary is how Swift’s inherent need to please people sets her up for failure in an industry that delights in bringing women down. She says, “My entire moral code as a kid and now is a need to be thought of as good.” She reached an abnormal level of fame at a young age, pulling crazy stunts to avoid paparazzi photos and having to be escorted out of her front door by a security team. Swift stresses that she thrived on the applause and validation she received on her way to the top, which sent her reeling when the media and the people later turned on her. From the constant criticism towards her, to her feud with Kanye West, she eventually retreated fully from public life for a year. This is perhaps the overarching message of the film; how the girl who simply wanted to be liked is done trying to please everyone.

The documentary touches on a handful of difficult topics: the sexual assault trial Swift was embroiled in with a radio personality in 2017, her eating disorder, and her mother’s cancer diagnosis. She opens up for the first time about her struggles with body image and the impossible beauty standards perpetuated by the media. It’s clear that her eating disorder is a topic that she’s not entirely comfortable addressing, so it’s commendable that she’s speaking out about it nonetheless. She also explains how important it was for her to win the sexual harassment trial she was involved in to show people across the country the importance of believing women’s testimony.

Swift also opens up about her decision to speak out politically. She broke her silence to support the opposition of Republican Marsha Blackburn’s Senate campaign, citing how Blackburn has voted against policies that would have helped women and members of the LGBTQ+ community. One of the most tense scenes in the documentary shows an argument between Swift and her team: her and her mother on one side, her father and the rest of her management on the other. She describes that she had never spoken out before as a combination of the fear of having her career ruined – like what happened to the Dixie Chicks – and her own belief that she didn’t know enough to share her opinions. “I need to be on the right side of history,” she passionately tells her team. Swift wrote a new song for the film called, “Only the Young,” a political anthem encouraging young voters to continue resisting even in the face of setbacks.

For all the more hard-hitting topics that the film explores, there are also sweet moments with the major characters in her life that fans will love. Swift’s parents appear consistently throughout – on airplanes with her and in board rooms. It’s difficult not to cry as Swift’s mother talks candidly about buying a dog after being diagnosed with cancer as it was something she always wanted to do. Swift’s boyfriend, actor Joe Alwyn, also pops up a few times (only once do we see his face) and she talks about the joy in finding love during a very difficult time in her life. One of the most touching moments sees Swift reunited with Alwyn and her mother backstage after performing. Swift’s three cats and her best friend from her younger years, fan-favorite Abigail, also make appearances.

There’s much to appreciate in “Miss Americana” even if you’re not a fan of Swift herself, as it explores what it truly means to live with that level of fame and to have the Internet turn against you. It crafts a compelling narrative about the difficulties of fame and the issues that women face. But for “Swifties,” as her fans are called, it’s nothing short of extraordinary. Swift has spent over a decade pouring her heart out in her songs, but this is a more vulnerable version of herself than we’ve ever had access to before.

I discovered Swift’s music when I was 12-years-old; I grew up alongside her (only being a handful of years younger). She wasn’t just a role model. She taught me more about love and loss than any other person. For those of us who love Swift, “Miss Americana” is the confirmation that not only were we right to continue to support her through a time when it wasn’t cool to like Taylor Swift, but that she’s still the epitome of a role model, as she learns to use her voice and her platform to bring about political change while also fighting sexism in the industry.

“Miss Americana” is about a girl whose dreams came true; dreams came with consequences and challenges she never could have expected. There are certainly gaps in the story – it notably doesn’t address the controversy around Scooter Braun – but it does allow Swift to reframe the narrative and set the record straight. There are also many little details – her cat’s carrier backpack, her drinking white wine with ice in it – that let you get a little closer to, not Swift the performer or the businesswoman, but the person. One thing is certain: while she’s still the girl with the guitar that burst onto the scene in 2006, she certainly won’t go back to remaining silent on important issues. As she says, “I wanna wear pink and tell you how I feel about politics. And I don’t think that those things have to cancel each other out.”