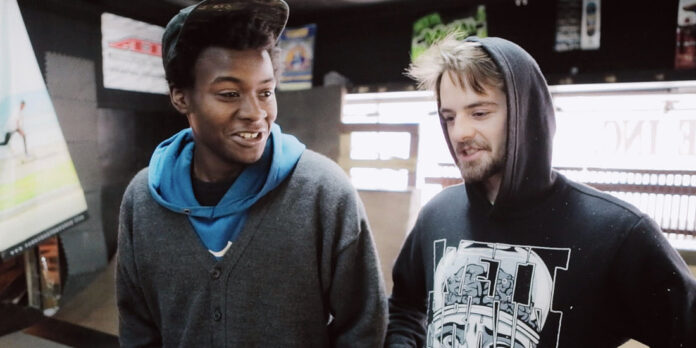 ​I’ve spoken before about what a fantastic year it has been for documentaries. It really is remarkable how the genre has flourished lately, and it is very encouraging to see so many people engaged with these types of films in a way that hasn’t really been seen previously. Still, I must admit that for as many great entries there has been this year, there hasn’t been one that has truly made the leap into something extraordinary. There have been many documentaries this year I would highly recommend, certainly, but I had yet to see one to truly astound me to the point of hyperbolic praise. Currently streaming on Hulu, that film has finally come my way, and it is quite a spectacular piece of filmmaking.

The subjects of the film are a trio of friends who all grew up in the town of Rockford, a Rust Belt suburb in Illinois that sits about an hour away from Chicago. Zack is the slightly older member of the group who faces the struggles of newfound fatherhood. Keire is seventeen-years-old and deals with a combination of his racial identity in a mostly white community and the memory of his deceased father. The film’s director, Bing Liu, also inserts himself into the narrative as the victim of an abusive stepfather. Broken homes and a love of skateboarding binds these three friends together, even as they must navigate their own decisions and consequences of their lives.

One of the great things that documentaries can accomplish is building a sense of intimacy that doesn’t seem manufactured or overtly manipulated. The feeling of dropping into the lives of a group of people in a naturalistic manner can be difficult to pull off for even the most accomplished of filmmakers. No doubt that the personal connection that Liu has to his subjects has made that easier, but it is still remarkable the ease at which he is able to capture this setting authentically. These young men exist in a town struck by crime and poverty, and its representation never feels exploitative. It is presented with a keen observation to understand the environment they live in and how it affects them. Liu acting as his own cinematographer also helps to highlight the rustic yet oddly warm setting.

It is in that examination that the film finds the most emotional treasure to explore. It is deeply fascinating how the lives of these three men are analyzed and to what it speaks of. All three of them have histories of abuse in their families, and the way the film comments on the effects of these elements is what makes the story so inviting. Zack seemingly carries the most baggage, projecting the uneducated, white working class that feels stuck with their lot in life and fuels that frustration with a continuing cycle of abuse. The film does not shy away from some heinous actions Zack may be privy to, but it also takes the time to understand the root of that pain and how many who live in such circumstances must navigate through it, whether dealing or receiving.

Keire’s narrative also provides an interesting look at how black youth maintains the delicate balance between their own racial communities and those of the friendships they have with mostly white people. It’s a subject that can be difficult to discuss, and the film manages to tap into those anxieties without ever feeling preachy. The relationship he had with his father is also one that is complex, with a mixture of resentment for the way he was treated but also a profound sadness for his loss. He oddly learned many life lessons from this figure and the way he expresses it is quite thoughtful.

Liu’s own story has its history of highlighting abuse at the hands of a parental figure, as well as the inaction of his biological mother. There is an interview Liu conducts with her that could have been the opportunity to make the film become its most trite and preening. However, the revelations provided here speak to a great despair that many partners in relationships involved in domestic abuse find themselves in, and speaking these truths in a raw and vulnerable way to provide some kind of healing is a grand gift his mother attempts to give. These interviews feature some of the most heart-wrenching moments of the film, but it is greatly appreciated that such powerful moments were able to be captured.

No film is absolutely perfect, and one could probably point to some meandering the film partakes in, as well as some billboard cutaways that do feel a bit on the nose when commentating on the story. However, those are all minor issues when compared the overall effectiveness of the narrative. The examination of these lives is one that holds a great discussion about the relationships with troubled friends and how one may pursue something better for himself while the other does not. It never rings false and captures this community with almost dreamlike imagery at times. All of that means Minding the Gap has established itself as head and shoulders above the group of incredibly strong documentaries this year. Not only that, it may just very well be my favorite film of the year so far.​