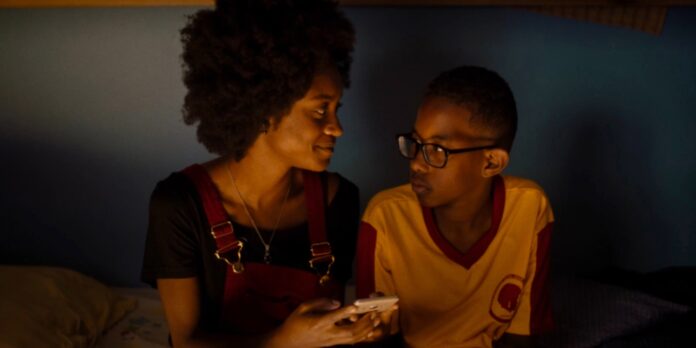 THE STORY – The Martins are optimistic dreamers, quietly leading their lives on the margins of a major Brazilian city following the disappointing election of a far-right extremist president. A lower-middle-class Black family, they feel the strain of their new reality as the political dust settles. Tércia, the mother, reinterprets her world after an unexpected encounter leaves her wondering if she’s cursed. Her husband, Wellington, puts all of his hopes into the soccer career of their son, Deivinho, who reluctantly follows his father’s ambitions despite secretly aspiring to study astrophysics and colonize Mars. Meanwhile, their older daughter, Eunice, falls in love with a free-spirited young woman and ponders whether it’s time to leave home.

When it comes to writing movies, there’s simply nothing better one can do than build good, solidly defined characters. This may seem obvious, but any film lover can tell you that far too many movies get distracted by other more bombastic elements rather than building a sturdy foundation of fictional figures. Gabriel Martins, the writer-director of “Mars One,” clearly has his writerly priorities straight, and his newest movie is a testament to his abilities. It’s a sweet film that doesn’t hesitate to put its characters in realistically dire situations that would unbalance anyone’s life, and yet it still manages to remain compelling and ultimately quite moving.

The Martins (who pointedly share the same last name as the filmmaker) are a working-class family in modern-day Brazil. They lead quiet lives – the parents have steady labor, and their daughter and son are both studying to pursue their passions. But as seemingly small issues begin to disrupt the unimpeded flow of their day-to-day existences, they must reassess what’s truly important and how best to deal with life’s unexpected disruptions.

The harmonious collaboration of the writer-director and actors gives the film’s central family life. Each character is fully developed without the need for long stretches of awkward, expository dialogue. Martins drops right into these characters’ lives and trusts the audience to be able to piece things together. All four of them are given generous time on their own for viewers to become accustomed and endeared to their habits, dreams, and flaws. The actors are all marvelous at imbuing humanity into the characters they portray. This may seem trite as it’s literally their job to do so, but even from the earliest parts of the movie, all four fully inhabit their characters in believable, captivating ways. A director could only dream of working with such a well-equipped ensemble.

Actress Rejane Faria in particular, turns in stellar work. She plays Tércia, the family’s matriarch, who begins to see doom everywhere she goes after a strange near-near-death encounter, leading her to believe that she has been cursed. She’s clearly on edge, but Faria never lets it become an overwhelming fear. Instead, she quietly and slowly allows it to consume her – a wise choice for a character who must keep both her household and job running. Faria is able to convey a wide-ranging array of expressions, both micro and macro, often switching between them within the same shot. It’s an impressive, severely sympathetic performance.

While “Mars One” is captivating from start to finish, by its very nature, it does meander. It’s a film less concerned with a typical three-act narrative structure and more focused on exploring characters and themes within its own well-built world. Notably, the film begins with the election of the far-right president Jair Bolsonaro, firmly establishing a specific time and place. This upsetting political outcome looms over the story but doesn’t consume the narrative or even explicitly play into the characters’ actions and reactions. It allows the film to be instead a story of a family living through uncertain times and making it by one day at a time, just as the creeds that are repeated at the father’s Alcoholics Anonymous meetings express.

Rather than feeling like an unnecessary shadow on the story, this choice of setting helps to lend the film a tone that’s quite lovely. In the face of adversity, both amongst themselves and in their country at large, this family knows that at the end of the day, all they have is each other. They don’t take that for granted, and by witnessing their story, perhaps viewers may be reminded that the connections to those around them are truly the only things that matter in this life.

<b>THE GOOD - </b>Above all else, writer-director Gabriel Martins builds solid characters which are brought to life by a more-than-capable team of actors. The film quickly endears the audience to these figures, making it a compelling and ultimately moving experience.<br><br> <b>THE BAD - </b>By its very nature, the film wanders as it explores themes and characters rather than a typical narrative, which can sometimes make the film's purpose hard to grasp.<br><br> <b>THE OSCAR PROSPECTS - </b><a href="/oscar-predictions-best-international-feature/">Best International Feature Film</a><br><br> <b>THE FINAL SCORE - </b>7/10<br><br>"MARS ONE"