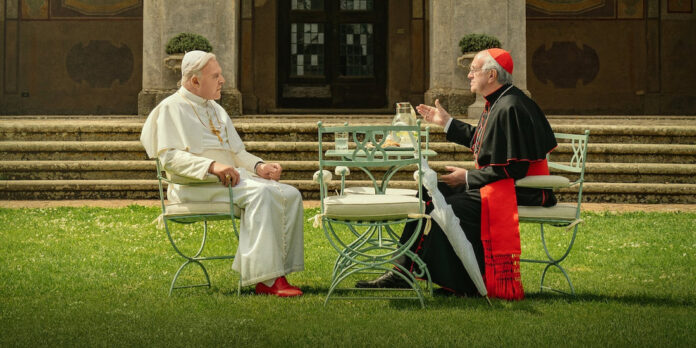 THE STORY – The Two Popes follows Cardinal Bergoglio – the future Pope Francis – meeting with Pope Benedict XVI in 2012 to request retirement. Instead, what follows is the Popefacing down his harshest critic in a series of meetings to determine the faith of the Catholic Church.
​
THE CAST –  Jonathan Pryce & Anthony Hopkins

​​​​Heading into a movie about two old men discussing faith back and forth for two hours doesn’t sound like the most exciting thing in the world. However, in the hands of legendary actors Jonathan Pryce and Anthony Hopkins, with a brilliant screenplay from Anthony McCarten, whose last three films produced Best Actor winners at the Oscars (“The Theory of Everything,” Darkest Hour,” and “Bohemian Rhapsody“), “The Two Popes” is actually quite hilarious and supremely entertaining. The two deeply religious men chat about various topics ranging from forgiveness, reform, ABBA, Soccer, Pizza and more you would not expect. Did I mention they also dance the tango at one point?  Yeah, this one definitely surprised us.

Pope Benedict XVI (Anthony Hopkins) is leading the Catholic Church at a time during great change and disarray from 2005 to 2013. With more and more people renouncing the faith due to widely documented sex scandals and the church’s unwillingness to adapt to more Western values and truths, his time as the powerful individual in the Catholic Church is being heavily criticized. As his health deteriorates with age and doubts starting to sink in, Pope Benedict XVI invites Cardinal Jorge Mario Bergoglio (Jonathan Pryce) to his summer estate in Rome to discuss his viewpoint on many trending topics within the church. The conversation takes many unexpected turns as Bergoglio is wishing to resign as a Cardinal and return to his home of Argentina as a regular priest. However, unbeknownst to Bergoglio, Pope Benedict XVI has also been questioning retirement as well: a decision which could have serious implications for the church and its 1.2 billion believers.

Acting as almost like a one-act play between two heavyweight veterans, Jonathan Pryce and Anthony Hopkins are both an absolute delight to watch on screen together. Pryce has a more charismatic role as his Cardinal Jorge Mario Bergoglio is ten years younger, both in body and in spirit. He delivers his lines with equal parts sincerity and quick-witted sharpness, as he always has an answer to everything. Hopkins is more physically and mentally tired, as he slowly moves through his Summer residency, clinging onto traditions and values of old. However, he sees something in Bergoglio and we can see it too thanks to the wonderful humanity and spiritual life Pryce brings to his role. While the two men don’t see eye to eye on issues such as homosexuality and reform, through their thoughtful conversations together, they each learn that “change is compromise.” And change is needed if the Catholic Church is going to survive. Carrying both of their character arcs to their natural conclusion with gravitas, humanity, and compassion, it’s hard to deny the work that Pryce and Hopkins bring to their roles when aided by such strong writing from McCarten.

While the writing and acting are extremely well-done and help to elevate this sort-of one-act play to unexpected heights, its the direction by Fernando Meirelles that left me praying for something better. Meirelles has not made a film since 2011’s disappointing “360,” and while it is great to have him back, his work on “The Two Popes” felt unfocused. There are multiple scenes where the camera moves without purpose and is sometimes operated handheld, which feels at odds with the kind of movie this is. The editing has some inspired moments such as when the leaders of the Vatican get together to elect a new pope to the sound of “Dancing Queen,” or through the intricate weaving of flashbacks to Bergoglio’s time as a young man in Argentina during the Dirty War. However, despite these inspired moments, it can be inconsistent with a few cuts that don’t quite match up properly.

“The Two Popes” is a surprisingly insightful character study of two men who many think are closer to God than anyone else alive but Anthony McCarten’s refined script reminds us that they are just men,  filled with flaws, seeking forgiveness and ultimately looking to do the best that they can while they are on this earth. Jonathan Pryce and Anthony Hopkins do the best that they can as well and it is most certainly enough, as their chemistry, humor, pathos and dramatic heft help to make this buddy dramedy worth checking out. Despite some qualms I have with Meirelles’s erratic direction, this holy match between two actors at the top of their game is one made in heaven.