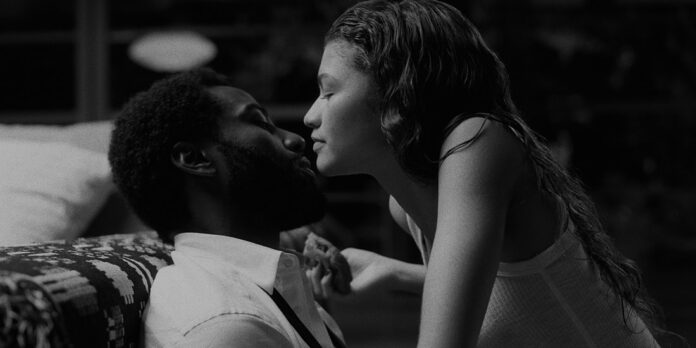 THE STORY – A filmmaker and his girlfriend discuss their past relationships while returning home from a movie premiere.
​
THE CAST – Zendaya & John David Washington​

​​​Sam Levinson exploded onto the Hollywood scene with his first two directorial efforts, “Another Happy Day,”  “Assassination Nation,” and his Emmy-winning HBO series “Euphoria.” The son of Academy Award-winning filmmaker Barry Levinson, Sam is not a traditional storyteller like his father is. Instead, Sam is rather focused on today’s youth and their perceptions of culture and the arts. Such a scathing critique has earned Sam the label of being called a “visionary” filmmaker. While I wouldn’t say he’s changing the cinematic landscape in any way necessarily, he is at the very least getting us to see it from the point of view of a new generation. His latest film, “Malcolm & Marie,” a contained 106-minute black and white two-hander with his “Euphoria” star Zendaya and John David Washington (“Tenet“), is his most direct criticism yet. Presenting a shaky relationship between two flawed human beings, the film acts as his own creative outlet for his affection and frustration with the film industry as a whole.

Malcolm (John David Washington) is a Black filmmaker who has just had the night of his life after his new film premiered to positive reviews from critics and audience members. He comes home with his girlfriend of six years named Marie (Zendaya) and he starts drinking and celebrating. He’s being hailed as the next Spike Lee, Barry Jenkins, or John Singleton. However, something is off with Marie. A failed actress herself with broken dreams and expectations, her past issues with addition were the foundation for Malcolm’s latest film and he forgot to thank her in his speech after the premiere. Such a selfish act cannot go unnoticed and as the mac and cheese that Marie makes for Malcolm starts to boil, so too does their relationship as the two begin an argument to end all other arguments. One that calls into question their perfections and imperfections, dissecting the difference between loving someone and needing someone.

Some will love “Malcolm & Marie.” Others will hate it. My guess is that those who hate it will do so because the film is ultimately about them in some way, shape or form. Levinson calls out film critics, the filmmakers, the film industry as a whole, even the audience. No one is safe from his unfiltered thoughts as they spew from John David Washington’s mouth (serving as the stand-in for Levinson). He begs us to question our relationship with cinema. Why are we so desperate to slap political labels on someone else’s piece of work? Does cinema need to have a message ultimately? Can it just be about heart and nothing more? What drives a filmmaker? What drives an artist? Levinson boils it down to a simple answer: all that matters is your own personal connection with the art in question. Not anyone else’s. How people will perceive your work doesn’t matter. How people perceive your thoughts on someone else’s piece of work doesn’t matter. All of the glitz and glamor we’ve lavished onto cinema, including the Oscars, none of it matters. How you perceive Sam Levinson, a white filmmaker, choosing to tell a story about two Black characters, doesn’t matter. How you perceive Malcolm and Marie’s love/hate relationship with one another doesn’t matter. Levinson is clearly frustrated with the state of film criticism and this is no better exemplified than by Malcolm’s (soon to be legendary) rant about a positive review of his new film in the L.A. Times. It’s brutal, harsh, over-the-top and dare I say, kind of right? I’ll tell you one thing; I will certainly be watching how I use the word “authentic” to describe a film from here on out.

Zendaya and John David Washington each deliver career-best work in two careers that are still young and have plenty of more great performances left to give. Their relationship is much like a rollercoaster. Self-contained in one set for the entire duration of the film, they can be loving each other one moment, then calling each other out and arguing the next. It all feels very theatrical, though as if we’re watching two great thespians on the stage do what they do best in a style which resembles the work of Mike Nichols or John Cassavetes. John David Washington has never been this loose before on screen. Many called into question his range after they saw him in “Tenet” (and probably didn’t see him in “Monsters and Men” or “BlacKkKlansman“) but his work here as Malcolm will certainly silence the naysayers as we get to witness just how far Washington is willing to go in his decisions as an actor. Chaotically throwing his body around the frame, sometimes pushing himself to an eleven, it’s a performance that walks a very fine line and can almost be considered comedic at times in how ridiculous Malcolm’s behavior actually is. However, he is complimented very well by Zendaya’s poised and deliberate work. Every word and gesture she chooses is measured and counteracts Washington’s grandiosity, which only further services to humiliate and demasculinize him, thus exposing more raw and honest thoughts from the characters towards one another. Even if you don’t agree with Levinson’s screenplay, the performances from Zendaya and Washington will have you riveted and exhausted by the end.

The blocking, staging and visual look of “Malcolm & Marie” was obtained on a shoe-string budget in a single location during the COVID-19 pandemic. Shot entirely in gorgeous black and white, there are some striking frames in this, aided in part by the beautiful rented home which Malcolm and Marie are occupying in the wake of Malcolm’s movie premiere. There are a number of long takes with dynamic camerawork but it never feels overbearing. The performances and relentless nature of the screenplay deliver that for us instead. Many will not agree with Levinson’s perspectives on the film industry (“Not everything I do is political because I’m Black” is one line from Malcolm, in particular, which has stood out to me) and that’s perfectly fine. It’s one man’s point of view and he’s made it abundantly obvious that he doesn’t care if we agree or disagree with him. What he’s doing is he’s calling into question the behaviors which we’ve taken for granted over the last couple of years when we watch and discuss art. It may just boil down to “let us have fun with art,” a criticism that I’ve also heard get scrutinized on the internet before but maybe that’s the point. Levinson’s characters tell us early on, “nothing productive will be said,” and maybe you’ll get nothing out of “Malcolm & Marie.” Perhaps you’ll get nothing out of reading my own thoughts on it. And I can tell you quite honestly that I do not think Sam Levinson cares whether you do or do not either. He made this because he wanted to work with his friend Zendaya again after they couldn’t shoot the second season of “Euphoria” due to the pandemic. Maybe we shouldn’t read into it any more than that. Or maybe, just maybe, we can read into it more than that and find a way to still come out the other side as full, honest, loving human beings, flaws and all. Too good to be true?