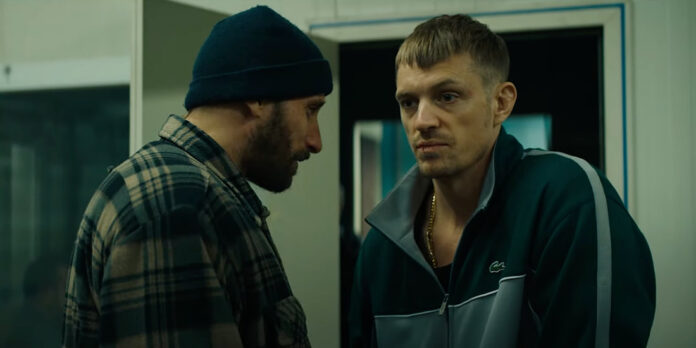 THE STORY – A man remains tormented by his sister’s death, while his cousin grows more powerful in the hierarchy of the family crime business.

​​It seems that no matter how much time passes, the relentless fascination for gangster stories will never cease. This landscape has provided many well-remembered achievements in cinema but can also show itself to be quite diverse. While certain classics showcase the specific worlds of one or two communities, the tapestry is rich with different perspectives that are not bound by location, culture, or race. Still, the foundation often remains the same in many of these films and true variety can be overlooked. Such is the fate of “Brothers by Blood,” a frank crime drama that struggles to gain new ground in an overexposed genre.

Set in Philadelphia, the story follows Peter (Matthias Schoenaerts) and the tumultuous relationship with his cousin Michael (Joel Kinnaman). The pair are embedded within the city’s criminal scene, though Michael takes a much more proactive role. Peter feels a great trepidation by falling further into this world and taking any opportunity to distance himself from the growing criminality. Tensions start to escalate between the Irish and Italian mobs, the former of which the cousins are a part of, and a war feels imminent. As Michael assesses his role in the upcoming violence, he must balance his loyalty toward someone as close as a brother and the necessity to find peace in a more stable life.

Writer-director Jérémie Guez tackles this material with a blunt approach, forgoing any nuance that could be afforded with a more sophisticated plot. The filmmaking is flat and stilted, causing the momentum to stall and the pacing to crawl. The film’s style is mostly banal, save for the oppressive close-ups and occasional cross-cutting attempting to break the monotony but only offers scenes of surface-level tension. As uninspired the direction may be, the screenplay fares even worse with an indulgence in shallow characters, stale dialogue and tired tropes of a masculine criminal enterprise with emotional bonds that are incredibly weak. Not much in the structure feels inventive in any storytelling method, and what’s left is the poor execution of a pedestrian narrative racing towards a frustratingly anti-climactic ending.

Schoenaerts is a respectable actor who has given some commanding performances in the past. Still, it is disappointing to report that he delivers one of his least charismatic turns to date. His presence here is somber to the point of nearly comatose, and he ends up with a portrayal that feels inert and, frankly, bored by the material. For his part, Kinnaman actually attempts to bring some villainous charm to his character and has a magnetic quality that makes him watchable. Still, it’s a more subdued performance that doesn’t showcase that much energy to be compelling. One appreciates his efforts to craft an engaging antagonist whose menace is captivating, but the character’s hollow nature deafens his impact.

The best in show probably belongs to Paul Schneider as a family friend with a debt to pay, as he delivers some layered and appealing character work that makes one ultimately invested in his screen time. One offers the greatest of sympathies for Maika Monroe as a bland love interest for Peter, who is completely wasted in a thankless role. She also serves as a further reminder of the complete lacking interest in the sparring female characters presented. Ryan Phillippe is also prominent in the flashbacks as Peter’s father, who is dealing with his daughter’s death. He does bring some emotional gravitas to this section but also struggles to create an entirely convincing portrait. He becomes yet another member of this ensemble that is at best serviceable and at worst dreadfully plain.

There isn’t much in “Brothers by Blood” that one hasn’t been accustomed to seeing in countless other films, and that is its biggest flaw. The story itself is mundane and lacks the creativity to find innovative ways to craft an exciting tale. Instead, it treads on familiar conflicts that are populated with wooden characters and a trite plot. The filmmaking is just as vapid and sadly, the performances do not elevate this material either, save for a few glimpses of more intriguing work that are far too inconsistent. No doubt the endless parade of gangster films will continue after this one. Hopefully, those entries will find the space for a more engrossing production than this particular effort.