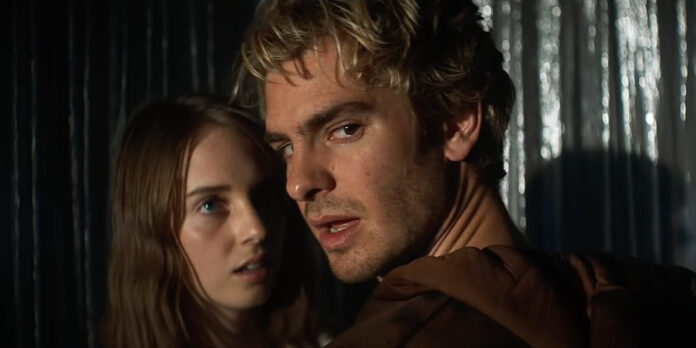 Isabelle (Maya Hawke) is a struggling social media influencer in Los Angeles who strikes gold when she meets Link (Andrew Garfield), an unemployed street artist prone to madcap rants and stunts in public. As she starts broadcasting his antics, the two rocket to internet stardom, incorporating Isabelle’s best friend Jake (Nat Wolfe) into their producing enterprise. As their star rises and their friendships struggle, the three gradually learn the price one pays for fame in the internet era.

Where to start with this one?

Society’s addiction to our phones and our fixation on social media content is ripe for skewering. Unfortunately for Gia Coppola’s “Mainstream,” roughly a third of society already had that idea. Pointing out that people are unhealthily addicted to their phones, that social media forces people to strive for unattainable standards of beauty, that overnight stardom can cause someone to lose their moral compass and creative integrity? These are all valid points. Also, they’re points that we’ve seen made (more effectively at that) in everything from “Black Mirror” to “The Mitchells vs. The Machines.”

Of course, making the same point others have made isn’t in itself a dealbreaker. If the story offers a unique spin on things, or if the craftsmanship is strong, then who cares if the themes are a bit repetitious? The problem with “Mainstream” is, the plot is extremely predictable, and the craftsmanship is inconsistent at best. Beat for beat, the film goes precisely where viewers have been trained to expect, with our heroes making it big by doing something unique, selling out creatively and morally, and finally, crashing and burning. And the sort of social media stardom the film is focusing on feels already four or five years out of date. It’s reminiscent of Steve Buscemi saying, “how do you do, fellow kids?”

And along this journey, we don’t have memorable characters like in “Ingrid Goes West” or “Eighth Grade” to compensate for such a lack ins tory. We have Jason Schwartzman standing in as the ultimate cliche of an agent. Nat Wolf is serving as a moral compass for the story’s debauchery and little else. Everything comes down to the film’s two leads: Maya Hawke and Andrew Garfield, and they really do try to elevate everything else around them. Hawke grounds the film as much as she can and will undoubtedly be a massive star as she possesses the same magnetic screen presence as her two parents do. However, it’s Garfield who is undeniably going all out in his wacky and unpredictable performance as an already crazy internet star that almost turns the movie into something special. He’s already sort of unhinged when we first meet him, but by the end, he’s turned into a truly dangerous and malevolent force as his internet personality “Nothing Special.” Whatever credit I can give to this film, I do so for him. It’s not just because he is excellent, but his broad performance works precisely because the film around him is also so broad. That sort of over-the-top absurdity works in the film’s world that Coppola has presented. But he’s the only part of that world that is entertaining to watch. For a film that intends to be as widespread and satirical as possible, it fails to be especially funny. So its tone is an odd mishmash of dourness and ridiculousness as if it wants to have its cake and eat it too.

The film’s craftsmanship can’t compensate either. The camerawork is sloppy, the lighting is flat, there is little consideration to the framing, and the cutting back and forth between shots is often jarring. It feels, dare I say it, almost like a student film at times. Director Gia Coppola (“Palo Alto”) throws in flourishes here and there, like silent film text cards and youtube-style animations popping over the characters at times. Still, they feel more like shameless attention grabbers than anything that actually serves the story.

To say that “Mainstream” disappointed me is an understatement. “Palo Alto” was a solid directorial debut for Coppola, and I like everyone in her follow-up’s cast. But sometimes, the pieces really do not come together to formulate anything as groundbreaking and profound as the movie hopes it is, and this is one of those times. Because of this apathetic attitude, I do not believe “Mainstream” will cross over into the mainstream.