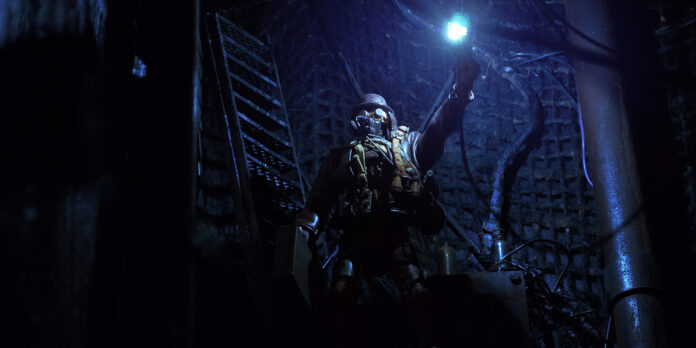 THE STORY – A figure known as “The Assasin” as descends from the heavens into a nightmarish pit full of monsters, titans and cruelty.
​
THE CAST – Alex Cox, Niketa Roman & Satish Ratakonda

​The end of the world has gotten so sexy in Hollywood. Whether it is the beautifully frenetic action of “Mad Max: Fury Road” or the bombastic thrills of “Greenland,” the apocalypse and all that follows tend to be portrayed on film as something to be awed. Not so in “Mad God,” the spectacularly crafted vomit of a film from legendary visual effects master Phil Tippett. Akin to cracking open someone’s skull mid-sleep and plugging an HDMI cable directly into their nightmare, this gorgeous-looking stop-motion animated film is not for the faint of heart, mind, or spirit. And while it is a repetitive movie that tries the audience’s patience, for those brave or unwise enough to enter, it is sure to imprint on the subconscious. Beware!

This descent into a world without hope just may be one of the most upsetting depictions of a hellscape ever depicted on film. The foolhardy viewers follow a miner-like character called the Assassin as he lowers himself through the winding layers of a derelict city. If he can make it past the bizarre and upsetting creatures that populate it, the destruction he can set off may be the only solution.

Stop-motion animation is genuinely one of the most magical cinematic forms. It’s the closest humans have come to bringing inanimate objects to life, imbuing handcrafted creations with an expressiveness that comes close to a soul. “Mad God” may just have the most impressive stop-motion animation. The film took decades to finish, and that effort shows. The characters’ movements are smooth and detailed, with hardly any evidence to give away the painstaking creative process behind them. The otherworldly creatures that inhabit the film are all impeccably designed, with many of them resembling nothing that has been seen before. Some of them are so well-crafted and upsetting to look at it’s hard to believe that a human conjured up some of the monsters that call “Mad God” their home.

But beyond the superlative technical elements and designs, the film is less admirable as a storytelling machine. But that may be the point, as the movie is closer to a modern art video installation than a typical three-act tale. There is no dialogue or explanations to guide one’s way through the film. The audience’s gut impression and emotional reaction are most important to Tippett. Still, even the most hardcore horror fans may find themselves turning away in disgust at some of the more excremental, infernal sights to be seen in “Mad God” (which is sure to be a selling point to some).

It feels odd to call Phil Tippett’s nightmare-scape a thing of beauty. After all, it seems to revel in revulsion and is unconcerned with the audience’s comfort or pleasure. But anyone willing to take a ride through this film that is more disturbing than can be imagined is sure to be dumbstruck in fear and wonder.