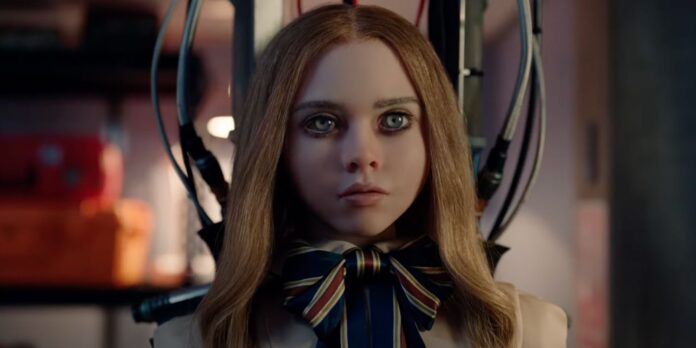 THE STORY – M3GAN is a marvel of artificial intelligence, a lifelike doll that’s programmed to be a child’s greatest companion and a parent’s greatest ally. Designed by Gemma, a brilliant roboticist, M3GAN can listen, watch and learn as it plays the role of friend and teacher, playmate and protector. When Gemmabecomes the unexpected caretaker of her 8-year-old niece, she decides to give the girl an M3GAN prototype, a decision that leads to unimaginable consequences.

It’s widely considered common knowledge that the first couple of weekends of January are a dumping ground for movies. It’s where studios like to bury projects that they don’t think stand a chance of doing well at the box office, leaving them to flounder among the Oscar bait that got released at the end of December that everyone is still buzzing about. But Universal’s marketing team has insisted that “M3GAN” not get lost despite its early January release. From the instantly iconic trailer to the troupe of M3GANs dancing to Taylor Swift’s “It’s Nice to Have A Friend” on the red carpet, it’s clear that everyone involved knew exactly what they had on their hands, and they leaned into it hard. Yes, everyone’s favorite horror trope, the killer doll, is back, under the guiding hands of reteaming “Malignant” screenwriters Akela Cooper and James Wan. If that pedigree alone doesn’t tell you exactly what to expect from the first big release of 2023, then let me tell you: “M3GAN” is an all-out blast, a fiendishly fun, endlessly entertaining PG-13 first-week-of-January horror flick that fully understands how absurd its premise is and knows exactly how to play it.

Young Cady (Violet McGraw) will not stop playing with the new “Purrpetual Pet” toy that her aunt Gemma (Allison Williams) gave her recently. With her trusty iPad, Cady can feed it, play games with it, and talk with it… and it’s driving her parents crazy when they’re trying to cut down on Cady’s screen time. But when they get into a car accident on their way to a ski trip, they die, leaving the traumatized Cady in Gemma’s care. As it turns out, Gemma may not be ready to be a parent. Still, she has the next best thing: an artificially intelligent android nicknamed M3GAN, a project she has covertly been working on when her boss (Ronny Chieng) wants a cheaper version of the Purrpetual Pets to compete with the market. But Gemma believes in M3GAN, and when she can’t break through to Cady herself, she puts the android on the job, letting Cady pair with her and giving M3GAN the prime objective to make sure that she’s both physically and emotionally protected. M3GAN’s artificial intelligence does even better than Gemma had ever imagined, making Cady the happiest she’s ever been and impressing Gemma’s boss in the process. But when outside forces – a neighbor’s dog, a boy at school, and even Gemma herself – start to stand in the way of Cady’s perceived happiness, M3GAN starts following her prime objective more and more aggressively.

The ideas behind “M3GAN” are far from new. The killer doll trope has been around seemingly forever, at least since the airing of the “Twilight Zone” episode “Living Doll” aired in 1963. The theme of man’s lack of control over AI also goes back to the 1960s, in Stanley Kubrick’s “2001: A Space Odyssey” and even before that in Isaac Asimov’s compilation of short stories “I, Robot” from 1950. This mixture has even been tried before, in 2019’s remake of the 80s classic “Child’s Play,” in which the Chucky doll starts killing people not because of a voodoo-practicing serial killer but a modified computer chip. But while that film was a mixed bag of intentional and unintentional laughs, “M3GAN” is satisfyingly self-aware in every frame.

Cooper and Wan’s screenplay, much like their work on “Malignant,” feints in the direction of the current craze for “elevated horror,” centering the plot around Cady’s trauma and Gemma’s complete inability to deal with it. There are even some incredibly moving scenes focusing on it, brought home by the strong performances of McGraw and Williams. Thankfully, director Gerard Johnstone lets the screenplay’s more bizarre qualities take center stage: The film begins with a commercial for Purrpetual Pets that elicits laughs for being such a perfect version of the thing it’s parodying, and the film only gets funnier and more meme-worthy from there. Do you want supporting characters so cartoonishly evil you’re counting the seconds until they die violently at M3GAN’s hand? Here’s four of ’em! Do you want M3GAN singing Sia’s “Titanium” while stroking Cady’s face to calm her down? You got it! Do you want a slow push-in on M3GAN tilting her head just so while watching Cady get upset while Anthony Willis’s score goes hog wild on the soundtrack? DONE! Do you want M3GAN doing a TikTok dance before ripping the blade off a paper cutter and stalking someone? Don’t worry; the last act delivers!

Everyone involved knows this is trash, and there is nothing better to do with trash than to lean into it and give the audience the biggest, most over-the-top version of it possible. Finding the line that separates “just enough” cinematic too-muchness from “too much” of it can be difficult. Still, Johnstone walks it perfectly throughout the film, an impressive feat given his less-than-extensive résumé: This is only his second feature after 2014’s “Housebound,” and between these two films, he’s proven amazingly adept at horror-comedy. Even more amazingly, he’s able to get a genuinely emotional performance out of McGraw and even Williams by the film’s final act, always making sure that our focus is on the relationship between these two, despite the killer doll having the titular role. And what a performance from M3GAN herself! Two actresses are credited – Jenna Davis as the voice and Amie Donald as the body – and both are great, but the real star is the visual effects work that went into making Donald’s face look so fabulously robot-like. M3GAN, the character, hits the uncanny valley of a robot doll perfectly, and while the soulless eyes and just-too-immobile lips give us nothing, Donald’s movements give us everything, especially when paired with the score, editing, and camerawork. This is shockingly well-made for a film released in the January dumping ground. That strong craft, paired with its self-awareness, makes “M3GAN” the film the perfect respite from all the overly serious, self-consciously high-minded Oscar bait that has been flooding theaters the last few months. This is high camp, a blast of fresh air amidst the winter doldrums. Shoot her down, but she won’t fall. “M3GAN” is entertainment titanium, bulletproof, with nothing to lose. Sit back and let her entertain you. You’ll have a really good time with your new friend to the end.

<b>THE GOOD - </b>A new campy PG-13 horror classic, complete with an iconic villain and a whole feed's worth of memorable moments. And it never forgets the heart and hurt at the center of its story? Oh, she came to SLAY!<br><br> <b>THE BAD - </b>As with all things camp, it won't be to every viewer's liking. Though it pulls off one or two decent jump scares, it's not really scary.<br><br> <b>THE OSCAR PROSPECTS - </b>None<br><br> <b>THE FINAL SCORE - </b>8/10<br><br>"M3GAN"