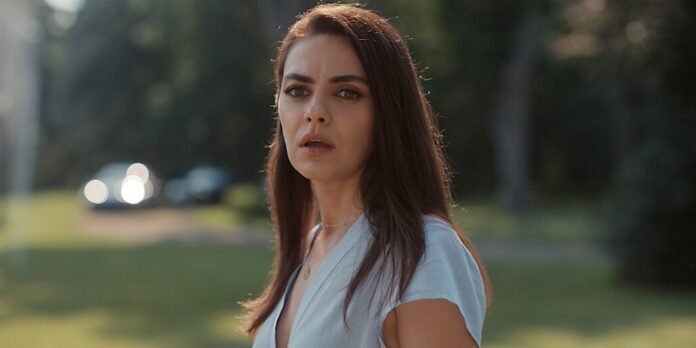 THE STORY – A successful woman in New York City finds her life upended when she is forced to confront a dark truth that threatens to unravel her meticulously crafted life.

The latest film adaptation of a hit book centered around a “complicated female protagonist with shady secrets” hits Netflix this Friday. However, this one is more “The Girl on the Train” – or even “The Woman in the Window” – than “Gone Girl.” “Luckiest Girl Alive” finds author Jessica Knoll adapting her New York Times bestselling mystery novel, which follows one Ani Fanelli (Mila Kunis), a successful editor at a glamorous women’s magazine on the cusp of a promotion who is also mere weeks away from a lavish wedding with her loving fiancé Luke (Finn Wittrock), the son of a supremely financially successful family. However, when Ani is approached by a documentarian named Aaron (Dalmar Abuzeid), who asks to interview her for a project he’s putting together concerning a school shooting she survived 20 years ago, her perfect façade comes crumbling down, as rumors about her potential involvement in said shooting resurface – supported by fellow survivor Dean (Alex Barone), who has his own troubled history with Ani – along with memories of her social (and emotional) ruination at school following a sexual assault. When the ties between these events become clearer and more truth comes to light, Ani struggles to safeguard her sense of self and may lose track of who she is entirely as the world decides if she’s a hero, villain, or something more complex and confounding.

If it wasn’t already clear from that plot synopsis, “Luckiest Girl Alive” is… a lot. You have to admire Jessica Knoll’s ambition when it comes to tackling this many timely topics in one story – school shootings, sexual assault, slut shaming, victim blaming, misogyny, toxic masculinity, and more – but, sadly, the execution comes across as far less than the sum of its parts. For starters, there’s simply too much to survey here to fit within the confines of a two-hour film. With so many bestselling books being adapted into miniseries these days (“Big Little Lies,” “Little Fires Everywhere,” “The Undoing,” etc.), perhaps that would’ve been the best format for “Luckiest Girl Alive,” as since the film hops back and forth between the present and the past (where young Ani is played by the strong but shortchanged Chiara Aurelia), it feels like there isn’t an even balance between these two storylines. Instead, present-day Ani receives the lion’s share of the audience’s attention (and character development), and we breeze through key beats in the past as if they’re nothing, hardly ever getting a solid grasp on how Ani evolves in this era and how her friendships form with the other kids at her “elite” Academy (especially given that, at the start, it’s made apparent that she’s an outsider on account of her lack of wealth – and yet, she seems to be picked up by the “popular kids” fairly quickly following that).

More troubling though is the script’s attempt to merge a story about sexual assault and one about a school shooting to show how these dual traumas – and the revolting rumors that resulted from them – devastated Ani, especially when each is thrown into the story rather randomly (and haphazardly) and additionally shot in a questionably salacious manner. Ani’s sexual assault admittedly receives more careful consideration – with the (failed) pursuit of justice and societal shaming that follows empathetically explored – but Knoll’s screenplay is at odds with Mike Barker’s more sensationalistic direction. Not only is the assault shown almost in full (mind you, we’re talking about two underage adolescents here), but some shots also linger far too long on young Ani’s nearly exposed breasts, making for an uncomfortably voyeuristic vision. And when we later arrive at the aforementioned school shooting – which undeniably feels crammed into the film and doesn’t fully fit with the rest of the story that’s been set up – Barker’s brash direction becomes even more inappropriately exaggerated (must we see actual students being shot, or Ani turning into some kind of “superhero” who “saves the day”?). When you compare this film’s depiction of a school shooting to something like the delicate and deft portrayal found in Megan Park’s “The Fallout” (released earlier this year), “Luckiest Girl Alive” looks even worse. Some may see it all as “shock value” and nothing more (especially since the film’s resolution is relatively rudimentary and redundant for a story like this).

Still, throughout this all, Mila Kunis continually rises above in the lead role, benefitting from the fact that Ani has her most concrete characterization in the present day timeline, but also elevating what’s on the page with her introspective and impactful performance, as we slowly watch Ani’s supposed “picture perfect” life fall to pieces. There’s more depth to Ani at this stage in her life – including a raw (and resonant) anger that arises as a result of both the evil she endured as a teenager and the constant castigation she still must circumvent as an adult – and it’s a riot to watch Kunis’ Ani throw caution to the wind and let her wrath consume her (her final line – delivered to a snooty woman dismissive of her sexual assault – is instantly iconic). It’s a shame that “Luckiest Girl Alive’s” script is too scattered to tie its disparate themes into one damning statement – and that the direction is so often too lurid to let this story live up to its potential on the page – because Kunis is clearly so committed (and commanding) in the role, operating as perhaps the only one who was able to successfully make sense of this mangled commentary and convey something poignant and profound. For die-hard Mila Kunis fans – or those simply looking for a semi-absorbing airport novel adaptation that you can play on Netflix while you tend to other things at home – “Luckiest Girl Alive” may be worth watching (Kunis’ snarky and sardonic narration is admittedly amusing after all, and it helps pass the time), but all others need not apply.

<b>THE GOOD - </b>Mila Kunis gives a committed and commanding performance in the lead role, with several powerful scenes (particularly towards the end), and she handles the film's tragic subject matter with maturity and grace.<br><br> <b>THE BAD - </b>There's simply too much going on here for any of the commentaries to feel effective or even particularly "fresh." Perhaps a miniseries - with more screen time devoted to each storyline - would've been a better format. (And a female director would've also been far better suited to filming the more "salacious" scenes - or cut them entirely).<br><br> <b>THE OSCAR PROSPECTS - </b>None<br><br> <b>THE FINAL SCORE - </b>3/10<br><br>"LUCKIEST GIRL ALIVE"