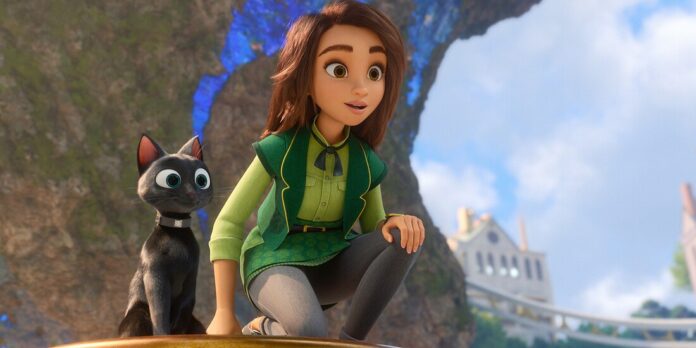 THE STORY – The story of Sam Greenfield, the unluckiest person in the world. Suddenly finding herself in the never-before-seen Land of Luck, she must unite with the magical creatures there to turn her luck around.
​
THE CAST – Eva Noblezada, Simon Pegg, Jane Fonda, Whoopi Goldberg, Flula Borg, Lil Rel Howery, Colin O’Donoghue & John Ratzenberger
​
THE TEAM – Peggy Holmes (Director), Kiel Murray, Jonathan Aibel & Glenn Berger (Writer)​
​
THE RUNNING TIME – 105 Minutes

​​​As the debut feature from Skydance Animation, “Luck” has a lot to prove. First and foremost, this is the first film officially under the guidance of John Lasseter since his ousting from Disney and Pixar, which shouldn’t be minimized. Plenty of more qualified individuals have covered his allegations at length, along with the women who left Skydance due to his hiring. Additionally, the studio must prove that it can compete with the heavy hitters in animation. With Pixar, Dreamworks, and Illumination dominating, does “Luck” show that Skydance could threaten their ranks? Unfortunately no. “Luck” instead settles for mediocrity. It’s not necessarily terrible, but it’s completely unremarkable. One might even go so far as to say this one is simply “unlucky.”

Sam, voiced by Eva Noblezada, is the unluckiest person in the world. At least, that’s how it seems. At every possible opportunity, she trips, drops things, gets locked in, runs late to work, and more. “Luck” picks up as Sam ages out of a foster home. She bids a nervous farewell to the younger girls in the house, particularly Hazel (Adelynn Spoon), a little girl desperate to find her “forever family.” In setting up Sam and Hazel’s foster background, the film aims for a teary opening in the same vein as “Up.” While the basic plot points are indeed tragic, it feels a tad exploitative or awkward to try and wrench the tears with this sort of story right from the start.

Eventually, after encountering a black cat who drops a lucky penny, Sam gets a taste of the lucky life and wants more. She follows the cat, unbeknownst to him, into the Land of Luck to try and find another lucky penny. Sam must track down another lucky penny for two reasons. First, the cat, Bob (Simon Pegg), will be banished if his lucky penny isn’t returned. Second, Sam wants to turn her luck around so that she can help Hazel find a better life. Still, once Sam enters the Land of Luck, the story’s true meaning starts to fade. Yes, Sam wants to help Hazel, but the film focuses so much more on the crazy escapades around the Land of Luck that it just feels pointless. Sam is causing chaos throughout this Land, and it feels more selfish than heroic. Ruining the peaceful existence of the world; we’re rarely reminded of why Sam is even there in the first place.

The Land of Luck, however, is a vibrant and fun world populated by cats, rabbits, and plenty of leprechauns. The inhabitants of the Land go about their day with endless luck, never having to watch their step or worry about anything. Here, the animation truly shines. It’s creative, colorful, and complex. This is a stark contrast to the rubbery and odd character animation. The characters are never as expressive as the worlds they inhabit, and their mouths rarely match the words they’re saying. It’s a disservice to the excellent voice acting overall, especially from Pegg and Noblezada, who are giving much more committed performances than the animation does justice to.

While the story of “Luck” is fine overall, there’s just not enough plot to fill the runtime. The pacing slows to a halt as Sam wreaks havoc in the world with little purpose. A particularly annoying dance sequence featuring an unbearably outdated original pop song adds nothing to the story whatsoever. To be fair, there are plenty of entertaining moments, like sequences involving Jeff, a strange unicorn voiced by Flula Borg. Still, “Luck” has too many endings, dragging the film past its natural conclusion.

This will likely be charming for younger kids, as there are lots of ridiculous hijinks, cute characters, and even poop jokes to keep them invested for an afternoon. For more demanding viewers, however, the story never lands. Further, it’s too reminiscent of other, better movies like “Monsters Inc.” While “Luck” isn’t a bad movie, it’s painfully average. It turns out this is an unlucky beginning for Skydance Animation, and they’ll need a different approach on their next film that does not remind us of better movies that came before it.