The 2022 Best Animated Feature Race So Far, And What’s Still To Come 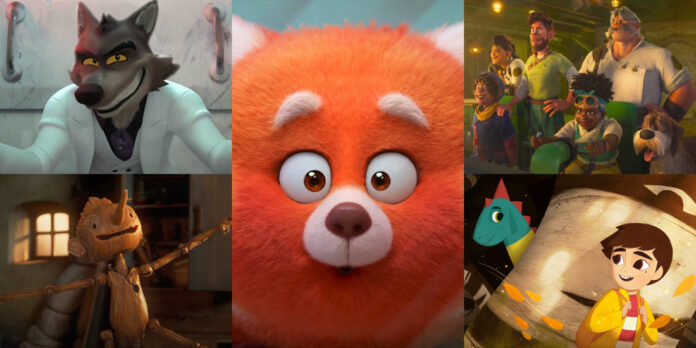 The summer is coming to a close, and most of the major animated feature films have now been released, entertaining the kids during their time off from school. Therefore, now is a great time to reflect on the films released so far this year and see how the Best Animated Feature Oscar race is shaping up. From respected directors to the heavy juggernauts of Pixar, it may not be the most obvious crop of films that are in front at this current moment, and there are still plenty of unreleased films that could become heavy frontrunners by the end of the year. But if what we have so far is any indication, this may be one of the year’s most exciting races.

The Films We’ve Seen So Far

Apollo 10 ½: A Space Age Childhood
First shown at SXSW before releasing on Netflix in April, “Apollo 10 ½: A Space Age Childhood” is an animated film loosely based on the childhood of Richard Linklater, who produced, wrote, and directed the film. Using the same rotoscoping technology as with his previous films “Waking Life” and “A Scanner Darkly.” The animation style is unique to any other contender releasing this year. While the film did have a festival premiere and is Certified Fresh on Rotten Tomatoes with a strong 91%, “Apollo 10 ½: A Space Age Childhood” feels like a film that has come and gone with little discussion or passion. “Waking Life” and “A Scanner Darkly” failed to garner any attention from the Academy, and I suspect it will be the same as Linklater’s latest animated feature.

The Bad Guys
DreamWorks Animation has had an interesting record in the Best Animated Feature category at the Oscars. With the exception of beating out Pixar’s “Monsters, Inc.” at the 74th Academy Awards when the category was introduced with “Shrek,” they have failed to take home any other wins since. They have had successful animated films since the “Shrek” franchise, particularly the “How to Train Your Dragon” trilogy, but recent releases such as “Trolls World Tour” and “The Croods: A New Age” have failed to receive nominations. However, I would like to make a case that their big release of the year, “The Bad Guys,” may just be able to hold onto enough momentum to earn a nomination in this year’s race.

Currently, “The Bad Guys” is the second highest-grossing animated film of 2022, bringing in $245 million worldwide. This is also paired with a high Rotten Tomatoes score of 88%, making it Certified Fresh. The contents of the film may also help garner support from the Academy due to the heavy film references that it contains, with inspiration and themes coming from “Pulp Fiction” and the “Ocean’s Eleven” franchise. The animation style also takes inspiration from “Spider-Man: Into the Spider-Verse,” the only non-Disney or Pixar film this decade that won the Best Animated Feature prize. With DreamWorks Animation getting ahead of the game by already sending out For Your Consideration screeners to voting bodies, it is worth considering the longevity of “The Bad Guys” and the potential for it to appear at the Oscars this year.

The Bob’s Burgers Movie
“Bob’s Burgers” is still beloved when it comes to television, managing to earn an Outstanding Animated Program nomination every year at the Emmys since 2012. Taking home two of those awards in 2014 and 2017, the show also managed to get a nomination in 2022. However, that same love will certainly not carry over regarding “The Bob’s Burgers Movie” at the Oscars. Only bringing in $34 million worldwide after a nearly two-year delay due to the pandemic, the film came and went with little attention. Considering the fact that “The Simpson’s Movie” in 2007 made over half a billion dollars worldwide and still failed to get an Oscar nomination for Best Animated Feature, there is no reason to consider “The Bob’s Burgers Movie” for this year’s award season.

DC League Of Super-Pets
For the most recent animated film released this year, the verdict is still out on whether “DC League of Super-Pets” is a success for Warner Bros. Pictures. With a high budget of $90 million and numerous delays due to the pandemic, this was a film that needed to perform well to be considered a box office success. The critical reception for “DC League of Super-Pets” has been leaning positive, but it has not been as overwhelmingly positive as films such as “The Bad Guys.” Unlike the recent success of another animated comic-book film, “Spider-Man: Into the Spider-Verse,” “DC League of Super-Pets” is very much targeted to a younger demographic. This choice may help produce substantial box office numbers from family members attending movie theatres. Still, it may become forgettable and lack the passion for keeping the momentum going until voting opens for the Academy members. Right now, I expect this to be more of a box office draw than an Oscar contender.

After releasing three Pixar films in a row on Disney+, “Lightyear” was the first Pixar film post-pandemic to head to movie theatres. First off, many people were initially confused about the concept of “Lightyear.” The lack of clear messaging and the high expectations for a film in the “Toy Story” universe left people slightly disappointed by the final product, even if it still has a decent 75% critic score and 84% audience rating on Rotten Tomatoes. So far, the film has earned $219 million at the worldwide box office, but that is with a $200 million budget. “Toy Story 4” entered the billion-dollar club in 2019, so “Lightyear” is a significant drop financially for the franchise. Granted, we shouldn’t ever fully count out any Disney or Pixar film when it comes to Best Animated Feature, but there is a case to be made that “Lightyear” may be deemed too much of a failure to earn a nomination.

Marcel The Shell With Shoes On
While “Marcel the Shell With Shoes On” may not be a traditionally animated film, there is enough animation with the cute little anthropomorphic shell that it seems like it should qualify for Best Animated Feature at the Oscars. However, the question now is whether members of the Academy will choose to nominate it. It will easily remain as one of the most critically acclaimed contenders of the year, with the film premiering at the 2021 Telluride Film Festival and earning a near-perfect 99% critic score on Rotten Tomatoes. However, the limited release schedule has made it hard for general audiences to see the film so far, as it’s only earned $3.6 million worldwide. It will be up to distributor A24 and film critics to continue to push the narrative for “Marcel the Shell With Shoes On” and remind voters that it is eligible to be nominated for Best Animated Feature this year.

The” Despicable Me” franchise has not had a strong presence at the Academy Awards, with only “Despicable Me 2” earning a nomination. Typically, it is a beloved franchise such as “Toy Story” or “How to Train Your Dragon” the Academy doesn’t like to nominate sequels or repeat franchise nominations for the Best Animated Feature category. “Minions: The Rise of Gru” was able to get a Fresh rating on Rotten Tomatoes at 70%, an improvement from the first “Minions” film with a Rotten 55% score, but that first film also made over $1.1 billion worldwide. Even with the significant reception and terrific social media presence, I do not expect “Minions: The Rise of Gru” to earn a nomination this year.

The Sea Beast
Netflix has a potentially strong line-up of animated films this year, with their first release being “The Sea Beast.” Directed by Chris Williams, who won an Oscar in 2015 for “Big Hero 6” and was nominated in 2016 for “Moana,” “The Sea Beast” combines both the fantastical character design and the gorgeous water sequences. It has a solid 94% Certified Fresh rating on Rotten Tomatoes, yet it feels like there is very little passion for keeping “The Sea Beast” in the conversation this year. There was very little promotion from Netflix leading up to the film’s release; therefore, not many people seem to be talking about it now that the film is out. With Netflix having such a packed line-up this year, I am worried that this one will be lost in the shuffle and pushed to the back of their priority list.

Turning Red
When it was announced that “Turning Red” would be placed on Disney+ instead of released in theatres, social media was rightfully mad about the decision. While the decision to put “Soul” and “Luca” exclusively on Disney+ to help grow subscribers during the pandemic could be seen as rational, there was no excusing this choice when “Encanto” still had a theatrical run in December 2021. Despite the lack of box office numbers to report and with an earlier release date than their expected hit “Lightyear,” it seems more likely that Pixar will be pushing for “Turning Red” to get a nomination for Best Animated Feature. The film has a 94% on Rotten Tomatoes, which is higher than last year’s Best Animated Feature “Encanto” with a 91%. There is also a potential push from those within the Animation branch of the Academy to reward the staff who worked hard on “Turning Red,” especially since their hard work was not appreciated on the big screen as they were expecting. There can be a lovely narrative attached to this nomination, and it should be the Pixar film that makes an appearance on the Best Animated Feature nomination list this year.