Looking Back On The Original 1947 “Nightmare Alley” 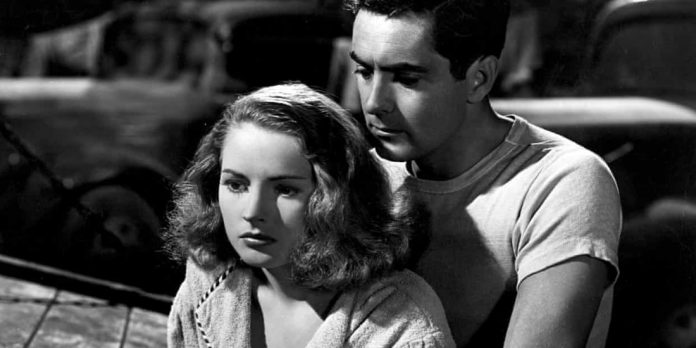 By Eve O’Dea
​
Per Turner Classic Movie’s Eddie Muller, the impetus for “Nightmare Alley’s” production came from its star, certified dreamboat Tyrone Power. Power had found his screen success during the previous decade as an archetypical swashbuckler of period romantic dramas, a sort of unofficial successor to the likes of Douglas Fairbanks Sr. Power believed “Nightmare Alley” would help him develop a reputation as a serious actor with the range to take on more dramatically challenging roles.​

As the alluring but crooked con artist Stanton Carlisle, Power convincingly portrays a desperate man corrupted by the fantasy of the American dream. With his matinee-idol good looks, audiences can easily see how one could be swindled by such a charming man, only to have the rug pulled out from under them once the lights come up. Though perhaps shocking to contemporary audiences, modern viewers will be all too familiar with a man willing to destroy his own personal reputation for a chance at public success. So convinced by his own cult of personality, Carlisle’s wings eventually melt, sending him tumbling into a sea of gloom and desperation.

At Power’s side is a more than capable cast of supporting characters. The Great Stanton’s life is primarily defined by his relationships with women, all of whom represent a different possibility of his life’s outcome. Joan Blondell is most remembered for her time as a staple of pre-code cinema, in roles filled with wisecracks, wit, and sex appeal (“Public Enemy,” “Footlight Parade,” “Gold Diggers of 1933”). Blondell often found herself in supporting but memorable roles as the years went on. As Zeena, a washed-out fortune teller, Blondell conveys a character mourning a life of missed opportunity, having been given a chance at fame only to be discarded for the next best thing.

As the naive, impressionable ‘electric girl’ Molly, Coleen Gray gives a convincing performance as a woman unaware of her own agency and power, one who relies on those around her to determine the outcome of her life. This provides one of the more questionable casting choices for the 2021 version. Given Rooney Mara’s past history playing dynamic, versatile, and cryptic characters, she finds herself underused in this role as a girl lost in this world of trickery and deception.

On the other hand, the decision to cast Cate Blanchett as psychiatrist Lilith Ritter could not have been more obvious. Sultry, cunning, and with a signature deep voice, actress Helen Walker easily reminds modern audiences of the hypnotic Blanchett. As a character who never shows her cards, Walker is effectively one step ahead of the other characters and the audience, who are unable to look away from her manipulative grasp.

Director Edmund Goulding may not be remembered as one of the all-time greats. Still, his career of over forty years clearly demonstrates an undeniable capability of storytelling and visual artistry. One of his most outstanding achievements as a director is that of the Best Picture-winning “Grand Hotel,” a criminally underrated gem of pre-code Hollywood so sophisticated in its composition it remains a timely character study almost ninety years after the fact. In “Nightmare Alley,” Goulding demonstrates his ability to elicit genuine, believable performances from a talented ensemble and shows his steady hand at producing effectively chilling imagery.

Cinematographer Lee Games won an Oscar for his craft for “Shanghai Express” (1932) and is greatly remembered for shooting other notable pre-code titles such as “Morocco” and “Scarface.” “Nightmare Alley’s” look is evidently inspired by that of German Expressionist films from the early 1920s to the 1930s and by the horrors of World War I. German filmmakers of this era used the nation’s collective trauma to produce stories of depravity and corruption, with titles ranging from the carnival-set “The Cabinet of Dr. Caligari” and earlier serial killer drama “M.” Through looming shadows and gravity-defying structures teetering on the edge of collapse, these films’ production design externalized a character’s internal moral dilemmas, presenting a world just as chaotic as one’s own mind. With the importation of European directors fleeing persecution during the 1930s and America’s own face-to-face encounter with devastation and violence during World War II, this distinct style began to creep into American cinemas in the mid-1940s. Film Noir (previously a genre of hard-boiled private investigators, femme fatales who are inevitably given their comeuppance, and classic MacGuffin-driven plots) began to turn darker, less a matter of good and evil and increasingly one of the psychological, the undefinable, the strange. Our leading men were no longer heroes with a chip on their shoulders, but ambiguous characters with ulterior motives hitherto unseen by American audiences (“Double Indemnity,” “The Lost Weekend,” “Crossfire,” “All the King’s Men” & “Ace in the Hole”).

Among its contemporaries, “Nightmare Alley” seems to have been one of the most willing to leave its audiences with a feeling of repulsion. Every trick, every act, is revealed plainly and shown for its ugly truth. The audience, including Stan, is instead tricked where we least expect it, not under a giant circus tent but in a shiny, gleaming skyscraper. With no reservations about airing its dirty laundry, “Nightmare Alley” pulls back its red velvet curtain to reveal a world which we’d rather not see but from which we cannot look away.

​Have you seen Guillermo del Toro’s “Nightmare Alley” yet? If so, what did you think? How about the 1947 original? Let us know your thoughts in the comments section below or on our Twitter account.