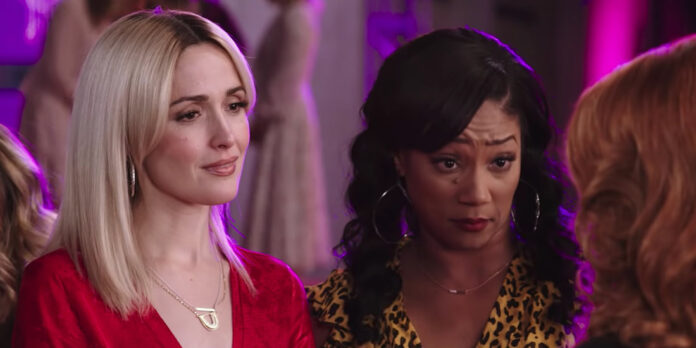 THE STORY – Best friends Mia and Mel run their own cosmetics company — a business they built from the ground up. But they’re also in over their heads financially, and the prospect of a buyout offer from an industry titan proves too tempting to pass up. The beauty business is now about to get ugly as the proposal puts Mia and Mel’s lifelong friendship to the ultimate test.
​
THE CAST – Tiffany Haddish, Rose Byrne, Jennifer Coolidge, Natasha Rothwell, Billy Porter & Salma Hayek
​
THE TEAM – Miguel Arteta (Director), Sam Pitman & Adam Cole-Kelly (Writers)

​​​​​Early January is usually a dumping ground. Hollywood studios famously bury bad films there, while the more prestigious end-of-year films enjoy their slow rollouts and awards expansions. So when a trailer for a January-released comedy like “Like A Boss” drops, and has the stench of desperation all over it, one could be forgiven for thinking that all the best jokes are in the trailer and that you don’t need to see the film. To be fair, you’d be pretty much right on the first point. But underestimate the ladies of this cast at your peril. The triumvirate of Rose Byrne, Tiffany Haddish, and Salma Hayek (with no small amount of help from ringers Mr. Billy Porter and Ms. Jennifer Coolidge) turn the otherwise average “Like A Boss” into a very fun night out at the movies.

Mia (Haddish) and Mel (Byrne) have best friends for over twenty years, ever since middle school. They’re essentially sisters, in the best “chosen family” way. And as Hollywood Screenwriting 101 dictates, one is a brash, carefree idea woman, while the other is a practical but meek businesswoman. Beauty mavens since they met, they now own their own cosmetics business together, but ever since opening their brick and mortar store, they haven’t been able to make ends meet. Not that Mel has told Mia this, nor would Mia likely even care if she did know. But when beauty mogul Claire Luna (Hayek) comes calling, they end up signing a lucrative deal with her in order to save their company. When it turns out Luna is just out to own the company herself through whatever means necessary, Mia and Mel’s friendship is put to the ultimate test.

The plot is boilerplate. You pretty much know going in every single beat the film is going to go through – nothing that happens is surprising in any way. We’ve seen this same general storyline played out in countless films and episodes of television before, but no one goes to see a film like “Like A Boss” for the plot, they go for the cast. And, boy, does this cast deliver.

After her heavily dramatic breakout role on “Damages,” Rose Byrne has proven herself one of the most stealthy, gifted comedians around, stealing “Bridesmaids,” “Spy,” “Neighbors,” and its sequel, out from under more established co-stars; and Tiffany Haddish has livened up everything she’s been in since she blew up in “Girls Trip” a mere two and a half years ago. With that (her)story, it’s only natural that they would be paired up eventually, and they have a lot to live up to. Thankfully, they prove a delightful pairing, their comic energies matching up perfectly. They also create a believable long-term odd-couple friendship; it’s easy to buy their devotion and belief in each other, even though they don’t always seem like they fit together in any other way. But even their fantastic chemistry, which livens up all the stalest jokes the screenplay has to offer, would mean nothing without a great antagonist. Thankfully, Salma Hayek knows exactly what kind of film she’s in, and cranks up the camp. She revels in every heightened gesture and Miranda Priestley-esque glare, exaggerating her accent (and her curves) just enough so that we buy into Claire Luna as a persona, if not an actual person. It’s great casting that serves as a reminder that Hayek is one of the most underrated comic actors around.

It would be great if the rest of “Like A Boss” was up to the hilarious performances at its center, but it only strikes the baseline competency that marks most studio comedies these days. It’s perfunctorily shot and edited, and while no, we’re not coming to see this film for great cinematography or editing, it would be nice to see a studio comedy that really lets us revel in the moment, with the talented performers giving it their all, instead of constantly cutting scenes into shot-reverse-shot bits. It’s also somewhat distressing that even though all the best jokes are in the trailer, the shots selected for the film are ALL different, and ALL less funny, than the ones selected for the trailer, a trend that I wish, with all my heart, would stop immediately. But even still, with these three funny ladies going above and beyond the call of duty, it’s hard to deny that “Like A Boss” is much better than its release in the January dumping ground would suggest. It’s not going to win any awards, but it’s enjoyable enough to secure a place as a basic cable mainstay for as long as basic cable remains a thing.