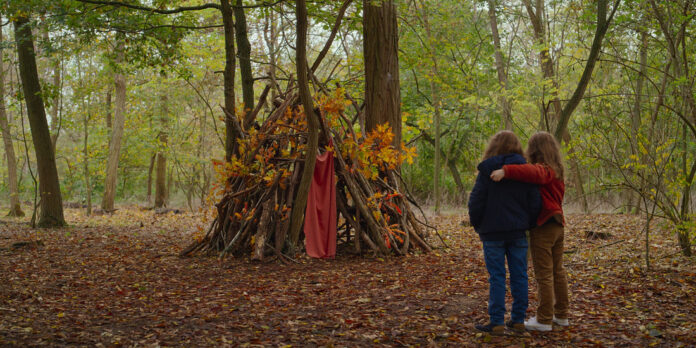 THE STORY – Eight-year-old Nelly has just lost her beloved grandmother and is helping her parents clean out her mother’s childhood home. She explores the house and the surrounding woods where her mum, Marion, used to play and where she built the treehouse Nelly has heard so much about. One day her mother suddenly leaves. That is when Nelly meets a girl of her own age in the woods, building a treehouse. Her name is Marion.​
​
THE CAST – Joséphine Sanz, Gabrielle Sanz, Nina Meurisse, Stéphane Varupenne & Margot Abascal

Céline Sciamma’s “Petite Maman” begins with eight-year-old Nelly (Joséphine Sanz) saying goodbye. She is going from room to room in the nursing home where her grandmother spent her last days sharing au revoirs with each of the residents. The French goodbye’s literal meaning is closer to “until we meet again,” which makes it a bit of a lie. Nelly will not be coming back here. After a couple of days spent cleaning out the house in which she grew up, Nelly’s mother, Marion (Nina Mourisse), leaves, too. While Nelly understands that her grandmother is not coming back, she is less sure about her mother. Wondering where she went and why, Nelly takes a walk in the woods outside her grandmother’s house and eventually meets a young girl named Marion (Gabrielle Sanz) building a treehouse. A treehouse just like the one her mother has told her stories about. When the girls get caught in a downpour, Nelly follows young Marion home to discover that she lives in a house just like Nelly’s grandmother’s

What is happening? Is it time travel? Or is it a fantasy Nelly has to make sense of the loss she is experiencing and to know her mother better? The film never says and doesn’t need to. The logistics of the plot are not what matters here. What matters is the feelings the film elicits in its audience, and for a film that is only 72 minutes long, “Petite Maman” packs in more emotion per frame than most films do in their entire running times.

There was perhaps no film at the 2021 Berlinale that had more expectations to live up to than “Petite Maman,” the follow-up to Sciamma’s masterpiece “Portrait of a Lady on Fire.” The universal praise heaped upon “Portrait of a Lady on Fire” would be a tough act for any film to have to follow, but perhaps especially one as slim as this. Thankfully, Sciamma is once again working with cinematographer Claire Mathon, who gave “Portrait of a Lady on Fire” its painterly quality. The two manage a similar trick here, infusing the film with an autumnal warmth that feels almost like a nostalgic glow, yet has almost none of the sentimentality one usually associates with nostalgia. This quality lends the film the feeling of a present-tense memory or a modern-day magic-less fairy tale. It looks beautiful in a hand-crafted way that makes the film feel personal and universal. Everyone remembers the feeling of being a child and running through fall leaves, getting caught in the rain, or making a new friend out of nowhere, but all of our experiences of those things are unique to us. The magic of Sciamma’s film is that it allows us the space to relive those memories as we watch Nelly make memories of her own on screen.

The one issue with “Petite Maman” as a piece of cinema are the central performances. Both children have moments where it feels as though they are reciting lines of dialogue, making their performances feel stiff. Those moments are usually when they say one of those profound things that children often say that feel unnatural coming from a child, like “secrets aren’t always something we hide, there’s just no one else to tell.” Some of the dialogue does feel like Sciamma herself speaking through a child, but it all has enough of a ring of truth to work as part of the film’s dream-like fabric.

And what a gorgeous dream this film is! As Nelly spends more time with Marion, growing closer to the mother, she says only tells her “little stories” about her childhood but none of the big things; Sciamma allows her characters to connect in a way that is only possible through the power of cinema – both with each other and with the audience. The open-ended, memory-like nature of the film invites the audience to experience this time alongside the characters and relive their own memories to grow closer to their own parents and children. As the story comes full-circle and Nelly must say “au revoir” again; we know that it’s not a lie this time. She will see Marion again, in a way, and their relationship will be different. Both of them will have grown, will have coped with loss and will be able to move forward, better and closer to each other than they were before. That “Petite Maman” can tell this story so succinctly and yet still feel as expansive as an hours-long epic is a testament to Sciamma’s talents. She is a true master of the cinematic art, and on her fifth feature, she is only just getting started.