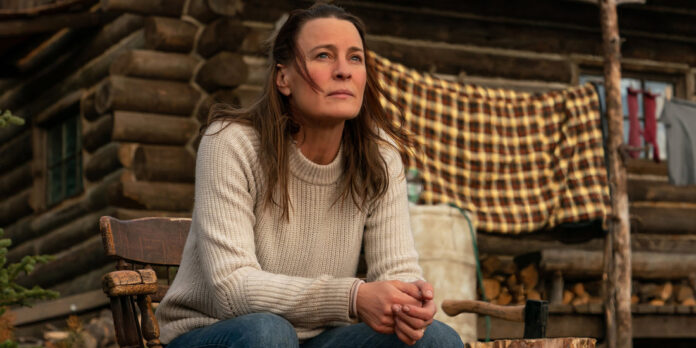 THE STORY – When Edee’s life is tragically altered, she loses the ability to connect with the world and people she once knew. She retreats to a forest in the Rocky Mountains with a few supplies and leaves her old life behind indefinitely. The beauty of her new surroundings is undeniable yet quickly humbling as she struggles to adjust and prepare for the winter ahead. When Edee is caught on the brink of death, a local hunter and his family miraculously save her, but she alone must find a way to live again.
​
THE CAST – Robin Wright, Demián Bichir & Kim Dickens

​​​​When one inclines to seek out a riveting character study, the best examples can come from stories where the main focus is on a single character and nothing else. This is not the only mark of a film that can dissect the nuanced motivations of a person, but stripping away other conventional machinations of a plot can further emphasize the central protagonist, giving insight into their emotional state and often, a chance to see a heralded performance. This set-up has frequently been paired with a conflict against natural elements, further emphasizing a mental and physical struggle. The results presented in the new film “Land” certainly showcases a good performance at its center, even if the rest of the story leaves much to be desired.

The film revolves around Edee Mathis (Robin Wright), a woman who is grappling with an immense tragedy following the death of her husband and son. Determined to deal with her trauma in complete isolation, she abandons civilization and heads for the Wyoming wilderness. Living in a small shack, she battles the harsh weather and encroaching wildlife to the point where she nearly dies. That is until her path crosses with a local hunter (Demián Bachir), who brings her back from the brink. He helps her become more sustainable in her new environment and the two eventually form a friendship that helps to illuminate the pain each is going through. For Edee, the question of how much time it will take to fully heal from her mental anguish requires an ongoing journey of self-discovery.

As previously stated, exercises like this one usually provide generous examples of endearing lead performances. That is precisely what Wright delivers here. Her ability to portray a hardened strength that masks a fragile vulnerability is often a wonder to watch and she gives another captivating turn as a woman dealing with the multiple layers of grief. This may not be career-best work, but she provides an engaging turn that captures bold histrionics and internalized conflicts well. She is most assuredly the standout of the film’s ensemble, even though the supporting players admittedly aren’t given much by design. Bachir is a fine actor, but his work here is merely serviceable and he isn’t given a role that requires much effort on his part. There is a naturally compelling screen presence from Sarah Dawn Pledge as another traveler who crosses paths with Edee. Still, the material also gives her little to make a profound impact.

Wright’s talents as an actor far outweigh her abilities as a director, in which she makes her feature film debut here. The filmmaking is a mostly mundane affair with a direction that feels stilted in a struggle to build momentum within the story. Some flare is attempted with occasional stylized flashbacks and some genuine moments of tension. However, the pacing still ends up dragging and what’s on display never reaches anything beyond the ordinary. Even the cinematography feels like it relies on the natural landscapes more as a crutch rather than an illustration of incredible craft. Some of these issues feel slightly resolved in the second half when it feels as if a more confident hand is in charge of the storytelling. Simultaneously, very little about Wright’s endeavors as a filmmaker satisfies anything beneath the surface of respectable but uninspiring.

The unremarkable direction isn’t helped at all by Jesse Chatham and Erin Dignam’s screenplay, which indulges in basic characterizations, stale dialogue and emotionally shallow reveals. The exploration of the themes to this story takes pedestrian routes that are hidden, at first, only to be the most obvious of conclusions eventually. While indeed blunt, it’s more the hollow core to the story that serves as the film’s biggest problem. There’s not much to this script that finds nuance within its commentary or presentation. As such, the tale presented takes on familiar discussions of grief and healing without ever feeling innovative. The work here is generic and plain.

“Land” is a film that embodies many conventions of films that came before it, particularly in its observations on a secluded person battling external and internal crises. The script is banal and takes no deep dives into any complexity this material could have provided. The filmmaking is functional but doesn’t elevate the work to be all that intriguing. The cast’s performances are mostly forgettable, save for an impressive Robin Wright, who does a lot to create the emotional investment within this narrative. In the end, there isn’t much to declare this as a completely failed effort. However, there also isn’t much to distinguish it from the countless tired products this genre has already produced.