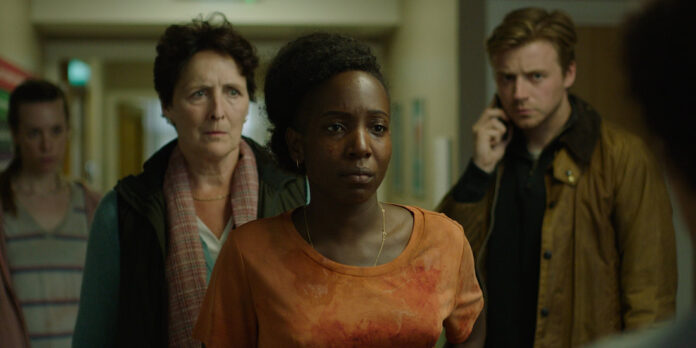 THE STORY – Plagued by mysterious hallucinations, a pregnant woman suspects that the family of her deceased boyfriend has intentions for her unborn child.
​
THE CAST – Tamara Lawrance, Jack Lowden & Fiona Shaw

​​​Charlotte (Tamara Lawrence) and her boyfriend Ben (Edward Holcroft) live a quiet yet fulfilled life. She works at the local stable and they have a close and tender relationship. The two decide that to transition into the next part of their life, they’re going to move from Britain to Australia. This would be easy to accomplish if it weren’t for Ben’s hostile mother Margaret (Fiona Shaw). The news terrifies her, and she refuses to acknowledge her son’s choice to leave his family.

Soon, to her dismay, Charlotte discovers she’s pregnant. While everyone around her is overjoyed, the fact that her mother suffered from postpartum issues weighs on Charlotte’s mind and the stress causes her to have strange dreams about birds. Creatures trapped in cages, slowly moving from dreams to reality, warning Charlotte of darkness to come. Shortly after her pregnancy is revealed, tragedy strikes when Ben suffers a horrific accident. When the news finds her, Charlotte faints and then wakes up days later in his family’s estate. What follows is a power struggle between Charlotte, Ben’s mother, and stepbrother Thomas (Jack Lowden), filled with mind games and crackling tension. ​

Writer/director Joe Marcantonio crafts a delicate drama that unwinds into a mind-bending thriller. “Kindred” is ominous in its portrayal of a woman essentially being held captive by her in-laws. Everything from its score – droning strings filtering in and out of the viewer’s consciousness – to the stellar cinematography adds an essence of dread to the film. Instead of using cheap jump scares, Marcantonio uses technical elements to unnerve the audience. As Charlotte’s mind begins to slip (or Margaret and Thomas begin to influence her breakdowns) you can’t help but wonder if the things being displayed in the film are real or not.

Along with its technical elements, “Kindred” is a success because of the performances it showcases. Lawrence is fantastic with every emotion she portrays radiating off the screen, forcing your heart to wrench as you watch her slowly succumb to Margaret and Thomas’s influence. Lowden is also great as Thomas’s intentions are never truly revealed until the film’s climax. Until this revelation, he plays Thomas with a hesitancy that makes him suspicious, but also a boyish quietness that allows the audience to trust him. Along with Lawrence and Lowden, Shaw plays Charlotte’s mother-in-law Margaret with a precise wickedness.

Something the film never directly touches on is Charlotte’s Blackness. This wouldn’t necessarily be a problem, except for the fact that the film is centered on her upcoming motherhood, mental illness, and the fact that she’s being kept captive by a white family. It’s one part “Rosemary’s Baby” and one part “Get Out,” but Charlotte’s race is a non-factor to the film. While there’s no way to tell if Marcantonio and co-writer Jason McColgan wrote the film with this intention, Charlotte’s presence within her overwhelmingly white environment is a factor in the way her mental and physical health are treated. It’s common for Black women to suffer in regards to their health, and while the film hints at this, it never fully leans into discussing race of its main character and how that plays into how she’s treated by those around her.

Although the film becomes strained in its last act as it falls into repetitiveness, “Kindred” is never uneventful. It’s hard to believe this is a directorial debut as it’s crafted with an amount of precision that usually comes from seasoned directors. Marcantonio’s career is sure to skyrocket, and if this film is any indication of what he’s capable of, his filmography is sure to be a long one. The film wants to get a reaction, make itself known, as Charlotte’s past and grief unabashedly consume her. In a year filled with indie horror films, “Kindred” stands out as a suffocating and thrilling film about family, mental illness, and autonomy.