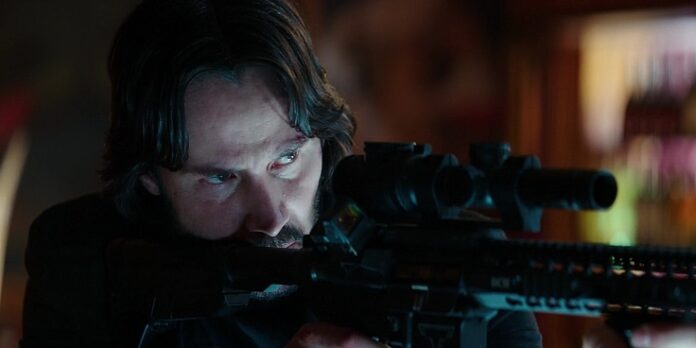 THE STORY – Retired super-assassin John Wick’s plans to resume a quiet civilian life are cut short when Italian gangster Santino D’Antonio shows up on his doorstep with a gold marker, compelling him to repay past favors. Ordered by Winston, kingpin of secret assassin society The Continental, to respect the organization’s ancient code, Wick reluctantly accepts the assignment to travel to Rome to take out D’Antonio’s sister, the ruthless capo atop the Italian Camorra crime syndicate.

​“John Wick: Chapter 2” may not be better than the first film but what this film manages to do is something that very few sequels can do. It meets its predecessor in almost every way. I hesitate to say that it’s better. However, it’s certainly not worse. “John Wick: Chapter 2” expands the universe of John Wick and plunges our hero deeper into the world he is constantly trying to escape, all the while providing us with dark humor, tons of action and an ever likable Keanu Reeves back in the lead role. He may be a man of few words and “John Wick: Chapter 2” may not be the deepest film either, but it does not need to be. It knows what it is and just like its main character, it embraces it.

Taking place immediately following the first film, “John Wick: Chapter 2” continues the story of retired contract killer, John Wick (Keanu Reeves) and the life that will not let him live in peace. When an old colleague, Santino D’Antonio (Riccardo Scamarcio), offers him a job based on an old moral code from the organization which he previously served for, John Wick wants no part of it. His refusal ends up costing him he and his deceased wife’s home, luckily though his new unnamed dog is unharmed. Now, fueled by anger and revenge, John is forced back into the world which he thought he had left behind, with dire consequences for anyone who dare crosses his path. He will need all the help he can get from returning characters such as Winston (Ian McShane), The Bowery King (Laurence Fishburne) and Aureilo (John Leguizamo) while he clashes with new foes such as a tough as nails bodyguard named Cassian (Common) and a mute assassin named Ares (Ruby Rose), once Santino puts out a $7 million open contract on John Wick’s life.

“John Wick: Chapter 2” finds a way to take the formula of the first film, in that a personal and unforgivable act is committed towards our hero, setting him off on a course of revenge. However, this sequel takes things a bit deeper than the last film did in terms of the secret society which John Wick is a part of. We discover more about how this society operates, their moral codes and who John Wick is to all of them. It sets the stage wonderfully for what is presumed to be the final chapter of this dark revenge story and at the center of it all is Keanu Reeves. It’s fascinating to me that the now 52-year-old actor has managed to find a character and a franchise which has given his career new life. As an action star of the 90s, many (Including myself) had written off Keanu Reeves as he managed to find a way to attach himself to one disappointing project after another. That all changed with “John Wick” and now it’s all solidified with “John Wick: Chapter 2.” The first film was no fluke and while Keanu, who does most of his own stunts in this film, is a large reason for that, credit has to be given to director Chad Stahelski, who co-directed the first film with David Leitch. Leitch may have gone on to direct upcoming films “The Coldest City” and “Deadpool 2” but it helps to have at least one of the original directors on board to keep the style of the first film thus making “John Wick: Chapter 2” feel so seamless.

The film may be a bit clumsy at times in terms of its pacing, presentation and the way it handles the character’s re-introduction initially, but once “John Wick: Chapter 2” gets going, there is no stopping it. The film is non-stop action, only pausing for moments of dark, self-referential (In the case of Laurence Fishburne) humor and exposition into the world of these dark and dangerous people. The gun-fu scenes are just as masterful as the first, as are the hand to hand fight scenes that can be quite brutal at times with no shortage of knives, broken bones, blood, and even a pencil at one point. The camera keeps its distance, allowing the audience to observe the action from afar and the editing is brisk enough, but never too chaotic, to deter from the overall experience.

“John Wick: Chapter 2” picks up right where “John Wick” left off, allowing us to continue our journey with John Wick as he so desperately tries to escape the life he previously led. Things are not that simple, as we uncover more layers to John Wick’s psyche. As the body count rises, we realize that the violence within the world of John Wick is a circle that never ends. This addition to the story of John Wick may have ended, however, it serves as a bridge to what is surely going to be a grand and bloody finale. John Wick may be back and may not be happy about it, but we certainly are.