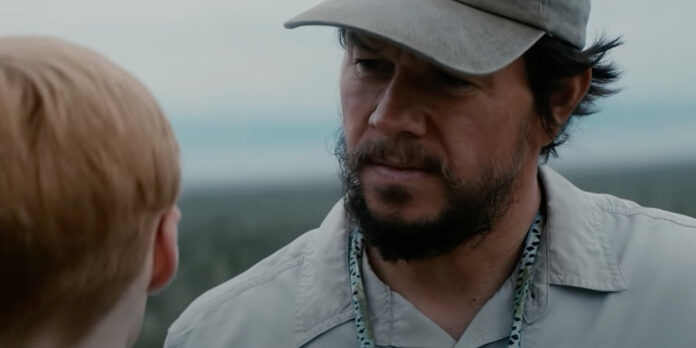 THE STORY – Joe (Wahlberg) could have been permanently broken by regret, but instead sets out on a mission. He will walk across America, speaking to school groups, communities, anyone who will listen, about the corrosive dangers of bullying. Screenwriters Larry McMurtry and Diana Ossana, who wrote Brokeback Mountain, shift between Joe’s cross-country odyssey and earlier scenes at home in Oregon. There, Jadin (Miller) suffers brutal homophobia at school and visible embarrassment at home from his father. He sees no other way out but suicide.

Joe Bell (Mark Wahlberg) is a decent guy. When his son Jadin (Reid Miller) tells him that he’s getting bullied at school because he’s gay, he doesn’t kick him out or beat him. Instead, he tells him to fight back just like he taught him when he was younger. And to just, you know, not make a big deal about or advertise his gayness to the other kids at school. In the present day, Joe is walking across America trying to spread an anti-bullying message to schools, lodges, and anywhere else that will listen. But he’s not a great public speaker, and he’s haunted by his son’s ghost. He still doesn’t fully understand his son and can’t quite bring himself to practice what he preached to him. Joe is motivated to keep moving forward, but he doesn’t really understand why.

Reinaldo Marcus Green’s “Joe Bell” operates in a similar mode to its protagonist: This is a simple movie, but it becomes eloquent in its simplicity. The film opens on a shot of a never-ending road in the middle of nowhere, Ohio. Joe has come far, but there’s still a long way to go, both physically and metaphorically. While Joe is walking on the right side of the road causing traffic to move around him, Jadin walks on the opposite side – there’s a distance between them in more ways than one. It’s not subtle, but then, neither is Joe. Nor, for that matter, is the issue of bullying. Bullying is bad, full stop. No two ways about it. One could ask for a stronger visual style and less blatant symbolism, but that wouldn’t feel true to the characters and their story.

Larry McMurtry and Diana Ossana’s screenplay similarly states its themes very bluntly. But when that dialogue comes from the mouths of these characters, it feels authentic. Jadin is a teenager, prone to making big statements about the way he sees himself in the world, and Joe is a simple man who has difficulty expressing complex feelings. However, there are moments when the film comes across as preachy (and it’s preaching to the choir, at that), and the script has difficulty finding a good balance between the two.

That said, “Joe Bell” is still tremendously effective. Jadin’s first kiss (with a football player, no less!) is incredibly sweet, and the climactic bullying incident is appropriately terrifying and gut-wrenching to watch. The aftermath, which leads to Jadin’s suicide, is heartbreaking, first from Miller, as Jadin desperately reaches out for help in any way he knows how, and then from Connie Britton as his mom, whose cries as she comes to the location where his body has been found are devastating. But most of the film’s effectiveness can be placed at the feet of Wahlberg. His star persona (simply-spoken and solidly masculine) is perfect for the role, and he turns in his finest dramatic performance to date. He charts Joe’s evolution excellently, playing Joe’s reaction to the world around him differently in each scene as he sees more and understands himself more. His reaction to Jadin’s coming out is a particular highlight – the look on his face as he takes a long pause before he speaks says everything the script does not – but nearly every scene offers something new. It’s a genuine, lived-in performance, a phrase that up until this point could not be applied to any of Wahlberg’s work, which makes this feel all the more special.

In the end, the straightforward power of both the story and the performances is what makes “Joe Bell” as moving as it is. The screenplay can feel a bit clichéd in its coming-out and grieving-parent tropes, and the cinematography, editing, and score are nothing particularly special. But they’re effective because of how of a piece they are with the characters, brought to life so well by the ensemble. The film may not change the world like Joe hoped to do with his cross-country walk, but it gives us a deeply felt look at a man who learned how to feel more deeply than he ever could have imagined possible. It’s a testament to the real-life Joe and Jadin that “Joe Bell” lives up to its moniker in every sense of the word.

Powered by JustWatch
Share
Facebook
Twitter
Copy URL
Previous article
The Next Best Picture Podcast: Episode 210 – Previewing The 2020 Film Festivals & The Trailers For “The Glorias” & “The Boys In The Band”
Next article
The Academy Establishes Representations & Inclusion Standards For Oscars Eligibility