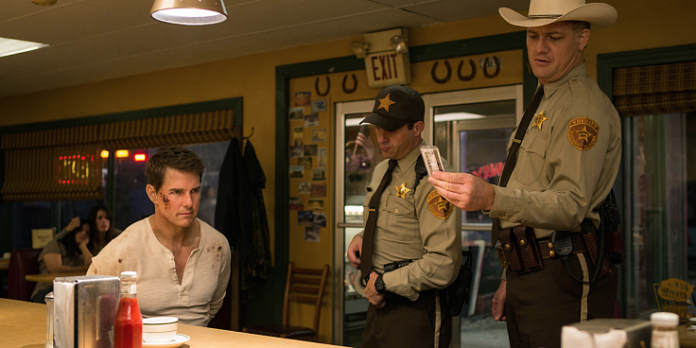 THE STORY – Investigator Jack Reacher (Tom Cruise) springs into action after the arrest of Susan Turner (Cobie Smulders), an Army major accused of treason. Suspecting foul play, Jack embarks on a mission to prove that the head of his old unit is innocent. After crossing paths with the law, Reacher must now go on the lam to uncover the truth behind a major government conspiracy that involves the death of U.S. soldiers.

10/21/16
​By Matt N.
​
Four years ago I ventured over to the local movie theater to watch the latest Tom Cruise action film”Jack Reacher.” I was excited to see what writer/director Christopher McQuarrie would bring to the material with movie star Tom Cruise leading the film. To my surprise, the film was a complete failure that did not excite nor entertain me. I ended up walking out of the movie theater know my time could be better spent watching other movies or television shows and I vowed I would “never go back.” Oh, the irony, as here we are, four years later and I found myself back at the local movie theater again for the sequel “Jack Reacher: Never Go Back.” While I did not walk out this time, the experience was pretty much the same.

Ex-Major Jack Reacher (Tom Cruise) is called back into action after a new friend of his named Susan Turner (Cobie Smulders) is arrested for treason. Suddenly, Jack finds himself also wanted from military police and on the run with Susan. Jack knows that something is not right and that they are being framed. On the run, the two are trying to prove their innocence and must protect themselves along with a targeted teenage girl named Samantha Dayton (Danika Yarosh) who may or may not be personally linked to Jack Reacher. As the lies start to become uncovered and the body count rises, Reacher begins to realize that there is a government conspiracy that has far bigger implications than simply wanting him and his friends dead.

Tom Cruise traditionally releases one film a year and with it always comes an air of excitement and anticipation. The 54-year-old star still holds a considerable amount of pull with movie going audiences and is still capable of leading an action film. This sometimes results in a terrific film such as “Edge Of Tomorrow,” an okay film like “Oblivion” or a terrible film like “Jack Reacher: Never Go Back.” This time around, I actually decided to give the sequel a chance due to the involvement of writer/director Edward Zwick (“Glory,” “Blood Diamond” and his last pairing with Cruise, “The Last Samurai”). After making a string of historical epics Zwick hit a bit of slump with “Love & Other Drugs” and “Pawn Sacrifice.” Those who felt he would be returning with another quality film like his earlier work will surely be disappointed as this as bland as bland gets here in Hollywood. His direction is so lazy and incompetent that one gets the sense that he got tricked into making this film after “Pawn Sacrifice” did not manage to do well financially in 2014.

The film manages to pick up the pace a bit as it moves towards its final action set piece set on top of a rooftop between Tom Cruise and Patrick Heusinger’s characters. That final fight features some terrific sound editing as the fists land hard and the action attempts to make us feel every blow. Unfortunately, the emotional stakes are derailed by uninspired performances stemming from a truly abysmal screenplay that is so “paint by the numbers” that “Jack Reacher: Never Go Back” might just be the most forgettable film of the year. I’ll tell you one thing I’ll never forget though and that is the horrendous acting performance of Danika Yarosh. Her character suffers the most from the screenplay as she is written to be a poor decision making young teenager that does nothing more than irritate the audience throughout the film.

I still can’t believe I subjected myself to “Jack Reacher: Never Go Back” but I got sucked into thinking that the film could at least be passable like “Jason Bourne” was earlier this year. I was wrong. It’s just as bad as the first film in how unexciting and unappealing it is. Everyone seems to be in it for the paycheck without an ounce of passion in their craft, save for that final fight scene which managed to keep me from falling asleep. I can now honestly say (For real this time) that if there is a third film in this franchise, I will “never go back.”