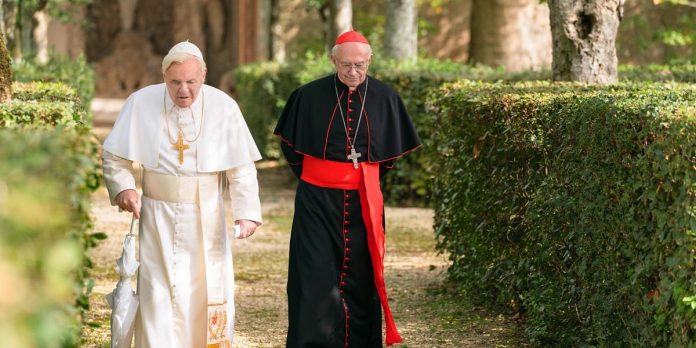 One of the special guests at Film Fest 919 was screenwriter Anthony McCarten, who was on hand to talk about his latest movie, “The Two Popes.” Chapel Hill, North Carolina’s Film Fest 919 runs in October and is only in its second year (I wrote about my experience at the festival in an earlier post). After the screening of the film, McCarten participated in an audience Q&A where he spoke about adapting it from a play to a film, his inspiration, and his research. I also got the chance to chat with him personally and ask him a few more questions.

With “The Two Popes” currently playing in theaters and streaming on Netflix later this month, I’m finally sharing my interview with the Academy Award nominated screenwriter.

McCarten is a three-time Academy Award nominee. Born in New Zealand, he is a novelist and playwright in addition to a screenwriter. He is known for writing scripts like “The Theory of Everything” (2014), “Darkest Hour” (2017), and “Bohemian Rhapsody” (2018). During the Q&A, he described himself – jokingly referencing what someone had said to him earlier in the day – as a “collapsed Catholic.”

McCarten began the Q&A by discussing how “The Two Popes” started out as a play. He still hopes to bring the play to London’s West End, but his agents suggested that it would make a good film. After meeting with different studios in Los Angeles, Netflix agreed to take on the film and offered him as much money as needed to make it. There are quite a few differences between the stage play and the film. For example, stories told through monologues in the play were adapted into flashbacks. Adapting it into film enabled the creation of a script that allowed for a grandiosity that isn’t possible on stage. McCarten was able to add the Vatican conclaves into the script, which makes for a fascinating part of the film, as the audience gets to see how popes are elected. Because crews aren’t allowed to film within the actual Sistine Chapel, they had to build one. In fact, their replica is actually five inches bigger than the actual Sistine Chapel, McCarten noted.

The film was partially shot in Argentina, where they were able to use many of the locations in which events had actually occurred. McCarten said that the confessional box in which Pope Francis (played by Jonathan Pryce) has the epiphany that he should become a priest, is the same one where the real Pope Francis had his own moment of revelation.

When asked about where his inspiration for the script came from, McCarten recalled that he was in Rome when he found out that his cousin had passed away. His sister asked him to light a candle, so he went to St. Peter’s Square where Pope Francis was speaking. This inspired him to delve into Pope Francis’s history, and while doing so, he became fascinated with Pope Benedict’s resignation (played by Anthony Hopkins in the film). His resignation marked the first time in seven hundred years that a pope had voluntarily resigned, which makes for an interesting story.

McCarten spoke about the large amounts of research that he did to prepare for writing this script. He compared writing about a real person to “an oil painting.” He said that the depiction of the person will always be impressionistic and not photographic; it’s impossible to perfectly capture that person. He said, “All famous people have developed along the way a persona. It’s my job to get underneath the persona.”

An audience member asked McCarten about depicting a person like Pope Benedict, who is a rather polarizing figure. He said that he developed a respect for the man while researching and writing. “When you’re a dramatist, you have to love both sides,” he noted. He said that he hopes this film speaks to the current argument between conservatives and progressives at large in the world and the need to find a middle ground where the sides can communicate.

After the audience Q&A, I got to chat briefly with McCarten and ask him a few more questions…

What was your process of taking “The Two Popes” from a stage script to a screenplay? Obviously, you have a lot more freedom to have different settings, but how much stayed the same?

Anthony McCarten: They’re the same and they’re very different. There are characters in the play that didn’t make it across to the movie. The play starts with Benedict and a nun and then it cuts to a scene with Francis and a nun. There’s a slower build-up to the news that Benedict’s going to resign.

When you’re adapting anything – you know I’ve adapted novels and I’ve adapted plays – you’re trying to make it cinematic, but also you don’t want to lose the fact that the best special effects in movies for a lot of people is a well-spoken line. So what I’m really grateful to Fernando [Meirelles] and the team for is that they didn’t run away from dialogue; the challenge of twelve pages of dialogue in a scene, which is very rare. When I watch this movie, you don’t want to cut away from [Jonathan Pryce and Anthony Hopkins]. The film is doing something that’s quite adventurous I think.

One of the things that really struck me about the movie is how much humor there is in the dialogue. Was that something that you always had intended?

My rule of thumb is that I don’t try to put humor into my stories, but I don’t try to leave it out either. It seems to me that humor is a natural part of everybody’s life and there has to be an element of humor to be realistic. In this case, I knew that Francis is a humorous person and he loves to joke. And I knew that Benedict is something of a stranger to humor and that in itself is funny. I thought I could have some fun as a dramatist showing one guy telling a joke and the other guy not understanding the joke. A lot of the humor comes out of the odd couple nature of that relationship.

You talked some in the Q&A about the research that you did and you’ve obviously written several screenplays about real people. What is the most important thing for you to capture when you’re dramatizing someone’s life?

Authenticity. It has to be authentic. However you get there, you have to do justice to the subject. You can never be sure you get it right, but when you do enough research, you try to love your characters equally. Then I’ve found that at the end of the day, when the subjects of my movies have been alive, they’ve approved of the portrait that I’ve drawn of them.

Are there special challenges in writing about someone who is still alive and who you know could see the film?

Both Pope Francis and Pope Benedict are very important and very controversial figures. How did you handle trying to show both of their good and bad characteristics?

It comes back to the idea that I’m charged with the challenge of seeing merits in both their positions. If I failed in that, then I would not be serving the challenge of having a true and fair debate.

You’ve written about a lot of interesting people. Is there anyone that you have on your bucket list that you would like to write a script about?

I do. I’d like to write about George Washington. I’d like to tell that story. I’ve kind of started work on that actually. I haven’t finished it yet, but that’s something. It’s a deep foundation story of America and no one’s ever told that.

“The Two Popes” is now playing in select cities and will hit Netflix December 20th 2019.