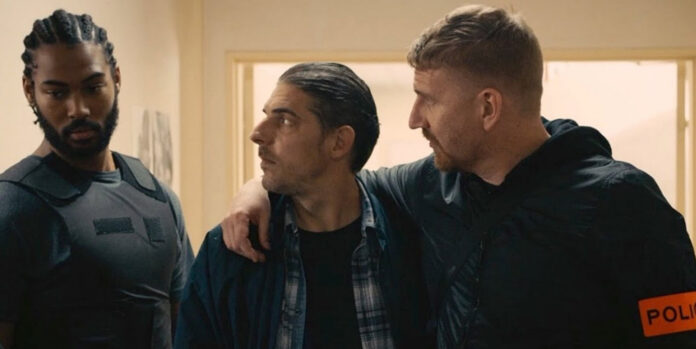 12/4/19
By Casey Lee Clark
​
​​​​Despite its iconic title, the new 2019 film by Ladj Ly, “Les Misérables,” isn’t based on the Victor Hugo novel or the musical based on it. Rather, it’s a day in the life of an anti-crime brigade in the Paris suburbs and their spats with the local Muslim community and “mischievous” young kids. The title is to signify a modern retelling of the clash between law enforcement and the common people, like that of Hugo’s novel, and the start of a revolution. However, despite a captivating opening and an electric finale, the film and its messaging suffer by having the film be told primarily from the point of view of the officers.

“Les Misérables” feels as though it should be a profound commentary on the corruption of the police system and their mistreatment of working-class people of color. Its primary focus is on new hire Stéphane (Damien Bonnard), his first day on the job, and his reactions to the horrors around him; but by having the film primarily told from the officers’ point of view, it diminishes the messaging of the film more than if it had been an evenly told story or if it focused more on the local community. It feels almost unnecessary to show how these officers go out of their way to avoid being caught in their misconducts, as a way of judging them and commenting on this behavior, rather than seeing how it directly affects those oppressed.

The film features a captivating opening with a group of local boys running to celebrate a major soccer game outside the Arc de Triomphe with fellow Parisians, and a sea of French flags flying over the crowds. This causes the viewer to assume they will be following these boys through the course of the film, and while they are major components to the overall story, they’re not given the emphasis like the police characters. It causes the overall message to feel less impactful when you don’t know these characters or their motivations.

The film culminates in a climactic finale that feels like what the film is all leading up to. Without giving away too much, this sequence is incredibly thrilling and bold, as well as being well shot. However, when you look at the film as a whole, it feels somewhat empty and raises more questions than necessary. It comes across as less impactful, and it’s strange that the main characters of the film are really the antagonists and you are rooting for their demise, not even in an anti-hero way.
As far as the technical aspects go, the film features nothing flashy or special with the exception of some unique drone shots (something I’m admittedly not a fan of). I do appreciate how the drone is used as an intrinsic plot point, but I personally find the overall film to be visually uninteresting. With the exception of its opening and conclusion, it has a modern-day television quality to it, as opposed to something cinematically grand. This isn’t necessarily a bad thing, but compared to many other films being released (particularly other thrillers and non-English language films), it can come across as lesser than.

All this is not to say that I actively dislike the film, I think it’s good with thrilling sequences. I just find that its messaging gets lost in which characters it chooses to focus on. The film’s message, executed by reflecting on the corruption within the police and their mistreatment of the community, feels less impactful when the voices and motivations of those being oppressed and targeted aren’t the main focus until the climax.