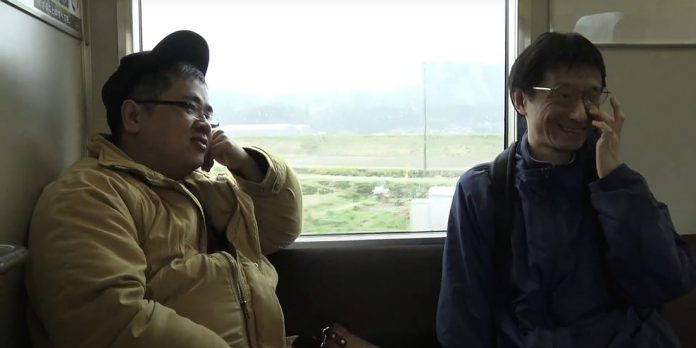 By Bianca Garner
​
On March 20th, 1995, Atsushi Sakahara was one of over 6,000 people injured in the attack on the Tokyo metro by the Aum Shinrikyo cult, which chillingly still operates and recruits today under the name Aleph. In his debut film, the documentary “The Atonement” (previously titled “Me and the Cult Leader”) Sakahara embarks on a journey with the cult’s executive, Hiroshi Araki, in an attempt to understand the life and thoughts of an Aum member.

What’s fascinating is the fact that the two men are around the same age, grew up in the same region, and attended the same university, but their lives diverged dramatically in the late ‘80s as Araki joined the doomsday cult Aum Shinrikyo following a family illness, and Sakahara found himself a job in downtown Tokyo. Next Best Picture caught up with Sakahara to discuss how his relationship with Araki developed, how humor is an important aspect of his outlook on life, and his overall experience dealing with the cult.

Could you introduce yourself and your documentary for our readers?

I’m Atsushi Sakahara and I’m a filmmaker based in Kyoto, Japan. I grew up here in Japan but I studied and graduated in the States for 5-6 years. I actually studied Business, not film. Business School isn’t really known for its film education but after the Tokyo Underground attacks, I gravitated towards filmmaking. My short film “Bean Cake” won the Palme d’Or at Cannes in 2001. After that, I returned to Japan and I met a lady and we decided to get married. However, a couple of days before we were meant to have the ceremony, I met her parents to get their permission where I discovered that she used to be in the cult [Aum Shinrikyo] a long time before I actually met her. This revelation completely tore apart my world and I really struggled to come to terms with it due to the PTSD I‘ve struggled with ever since the attack. Then I injured my spine and came back to Kyoto in 2013, which led me to decide to investigate the cult further and create my own report on the “banality of evil”.

How did the relationship between you and Hiroshi Araki develop and how did you manage to get him to open up to you?

I reached out to Aum and Araki [who is one of the executives of Aum] back in 2013; sending them an email but there was no response. I then called them, no response. So, I decided to send Araki a video message, which he then replied to which started up the lines of communication and he decided to collaborate with me. At first, we weren’t sure what we would shoot. I’m not an experienced documentarist. For me, the concept of making a documentary is like cooking at midnight: you have to work with what is available in the fridge and the materials you have on hand to work with. I made sure Araki knew that I wasn’t going to go easy on him during the filming. Maybe it’s down to psychological damage, but what happened to me doesn’t always feel real so I was open about this in my conversations with Araki which I think helped put him at ease and allow him to open up. Also, I believe in the idea that we’re here for a reason, in this exact moment, so let’s talk. Another thing I wanted to ensure was present in the film was humor to balance its tone, so I had to allow Araki to become relaxed around me. I really wanted the audience to be entertained as well as being informed by the documentary. The balance was a challenge, but my editor did a fantastic job with the final cut.

At any point did the cult try to stop you from making your documentary?

No, but it did take a year of careful negotiations and communication back and forth to get them to say yes to it. I had the task of convincing twenty executive members of the cult too. I had to visit the headquarters and let them know who I am, what my interest was in Aum, and let them know that I was open and honest. I think one factor that helped me get my request accepted was the fact that my former wife had been a member. Also, I am a victim, not a journalist or an expert in cult mentality, so I was open to discussion.

The film contains some very beautiful and tender moments. For example, the scene where you and Araki listen to music together on the train. How did you manage to reach that level of comfortability around a member of Aum?

I remember when I first saw the final cut thinking to myself about how special and meaningful that moment was. Not many people would have been in such close proximity to someone like Araki. What you see in the film was how I really did behave and how I acted towards him. I’m a natural joker, that’s just who I am in real life. I’m not like other filmmakers, I wanted my film to reflect my personality. As a victim, I found it helps to have a sense of humor.

It was a surprise to discover that Aum is still operating and recruiting members. Why do you think people are still drawn to the cult despite it being public knowledge of their involvement in the Tokyo subway attacks?

I found during my research that members of Aum hide their identity and approach young people on the street who could potentially be interested in joining the cult. They have their own special technique which has been researched by the Japanese security agency, and I also experienced the recruiting technique firsthand. I was approached by a young lady who said she knew exactly what I was thinking and talking generally about topics such as yoga, all the while not disclosing that she was part of Aum. Then finally she started talking about conspiracy theories, and Aum has their own videos all about different conspiracy theories, so this is how they hook people in. At some point, lots of young people have begun disbelieving what the mainstream media is telling them and have been sourcing their “information” from alternative sources, with Aum being one of those sources.

What’s one thing you would like people to take away from your documentary?

I hope people will understand how easy it was for Araki to become a part of Aum. We came from the same city, we’re of a similar age and attending the same university. Before he joined the cult, he had so many options ahead of him. He gave up his individuality and is 100% dedicated to the guru. In a sense, he’s become a zombie and is hiding behind a mask. From the very beginning, I had a clear objective: “to unmask the mask”. Another thing that I feel is in the deep root of the story – although it’s not explicitly said out loud – is the idea of learning to love yourself. Araki is a person who doesn’t love or accept himself for who he is. Despite any hardships you may encounter, as long as you love yourself unconditionally, you can survive anything.

“The Atonement” had its world premiere as part of Sheffield Doc/Fest’s digital edition. Check out the trailer below.