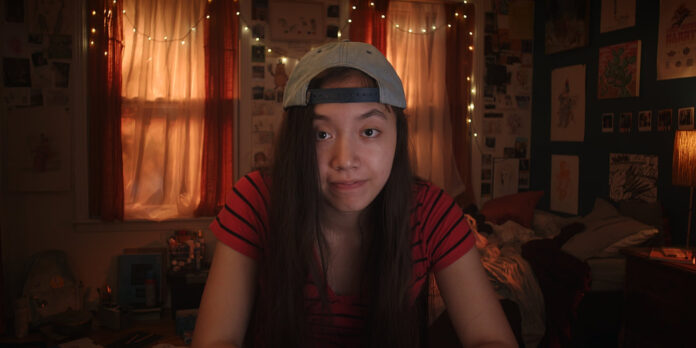 ​Being a teenager is not fun. Beyond having to deal with school, parents, and the general confusion of determining a future, there’s love and heartbreak. These topics have been catnip for teen movies since the 1950s and “Inbetween Girl,” the new drama by director Mei Makino, filters these familiar tropes through the eyes of an Asian-American artist.

The eponymous “Inbetween Girl” is Angie Chen (Emma Galbraith), a senior at an Episcopalian school in Galveston, Texas. She has a Chinese father and a white mother who just split up, and the latter has won primary custody despite being a workaholic. Angie’s father, in the meantime, is dating a Chinese woman with a seemingly perfect daughter. Things at school aren’t looking much brighter. Angie’s flirtation with high school stud Liam (William Magnuson) leads to them regularly hooking up even though Liam is dating a classmate of hers.

It’s all very messy and emotionally charged, which is an authentic tone given the setting and subject matter. Angie is a sensitive and bright teen, but she always feels caught in between the various people in her life, like she never truly belongs. The script explores this alienation in several ways, some of which are cliched and some of which are utterly inspired.
“Inbetween Girl” shines brightest when it’s focusing on Angie’s relationship with Liam. The actors have tremendous chemistry during their many scenes. Though Liam’s character can sometimes be flattened into a generic “jock,” he provides a great springboard for Angie to wax poetic about her place in life. The dialogue is sharp and oftentimes quotable, even if the price for such banter is that sometimes the one-liners can come off self-consciously “deep.”

The film takes several unpredictable routes during its first half as Angie is consumed by thoughts of sex after hooking up with Liam. One of the funniest scenes involves her strutting through school, contemplating how she would fare with the other male students (these daydreams are accompanied by inserts of Angie’s crude drawings). It’s a frank and honest depiction of female sexuality, and it feels like Makino is putting her stamp on the high school genre in a major way.

I was also pleased to see the film delve into Angie’s struggles as a biracial person. Her attempts to spend time with her father’s new girlfriend and daughter result in her feeling inauthentically Chinese, especially since she’s unable to speak Mandarin. It’s a subject that’s rarely shown onscreen, and as someone who is biracial and often caught between different cultures, it was enlightening to see. My chief complaint would be that there wasn’t more screen time dedicated to this element of Angie’s life.

I wish “Inbetween Girl” had stayed the course during the final act. Instead, it reverts to cliched story beats (girl loses friends, girl argues with parents, girl learns a lesson) and a broad, bland message about “being yourself.” Of course, it’s a positive message, but the film had so much more potential to connect with viewers had it continued to make unique, specific choices.

“Inbetween Girl” is a decent coming-of-age drama with some standout elements. Fans of the genre may find more than I did here, especially if they’re willing to overlook a few structural contrivances.