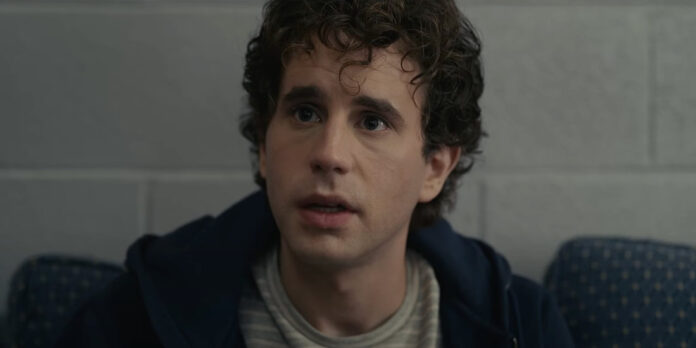 THE STORY – A high school senior suffers from social anxiety disorder which leads him to struggle at school. His journey of self-discovery and acceptance begins following the suicide of a fellow classmate.

​​​​​​​Let us begin by acknowledging that the Broadway musical “Dear Evan Hansen” means a lot to many people. The show’s depiction of a lead character dealing with crippling anxiety was groundbreaking, and for many people, it was the first time they had seen themselves in a Broadway musical. The show’s big hit song, “You Will Be Found,” has become an anthem for those who feel lost and alone in the world, which is a great many people. So let’s state, right up top, that these are lovely sentiments and that there should be more stories focusing on these types of characters with this kind of message. Because, frankly, they deserve a lot better than this.

Evan Hansen (Tony Award winner Ben Platt) is your average high school senior whose awkward nature has left him without many friends. Well, any friends at all, really, unless you count Jared (Nik Dodani), who counts himself as more of a “family friend” than a true friend anyway. On the first day of school, Evan is trying to complete an assignment for his therapist: He has to write a letter to himself saying that today will be a good day and list the reasons why. He finally comes up with something that talks more about why it’s not going to be a good day and prints it, only to have it be intercepted by class crazy Connor Murphy (Colton Ryan), who spots a line in it about his sister Zoe (Kaitlyn Dever) after signing Evan’s cast. Later that week, Evan gets called to the principal’s office. It turns out that Connor killed himself, and his parents (Amy Adams and Danny Pino) found the letter on him and now believe that Evan was Connor’s only friend. Seeing how desperate they are, Evan plays along. But what seemed at the time like a good deed snowballs into something bigger as Evan gets closer with Zoe and becomes a viral sensation after talking about his friendship with Connor at a memorial service.

While there’s nothing inherently wrong with this plot (white lies born out of misunderstandings that make no sense have driven countless movies and musicals alike), the problem with “Dear Evan Hansen” is the tone that it takes in telling this plot. Take the song “For Forever” as an example. It is a beautiful song with a soaring melody on the chorus and lovely orchestration. It reflects the face value of Evan’s story of one perfect day that he spent with Connor – both what it means to Connor’s family to hear about the sweet side of him that they never saw and, more importantly, what it means to Evan as the fantasy of what his life could have been like if he had just had that one friend who truly saw him and understood him. Never even once does the scene acknowledge the moral ambiguity of the situation, that Evan is telling a bald-faced lie to a grieving family and making himself something of a hero in the process. When Evan gets up in front of the whole school at Connor’s memorial service and, after stumbling through part of his prepared speech, sings “You Will Be Found,” the emphasis is placed entirely on the earnestness of the moment and how the message that “you are not alone” touches thousands of people on social media. The song is not presented as something that Evan wished he had communicated to Connor, but rather what Connor made Evan feel… again, never even once acknowledging the moral ambiguity of the situation.

Part of this problem – most of it, even – can be laid at the feet of the songwriting team of Pasek and Paul. The most basic songwriters working in musical theater today have been borrowing themes from these Tony Award-winning songs since the show premiered on Broadway in 2015. While they’re capable of writing a decent pop song, complexity is not one of their strong suits. Nor is specificity. With each new song about feeling alone, or being seen, or being proud of who you are and screw all the haters, the film can’t help but feel like the same exact song over and over. The duo has added two new songs to the film, and while they each serve a character who was underwritten in the original musical, they feel like rewrites of other, better songs from this same score, with lyrics so anodyne and generic that they feel like they were written by robots set to “inspirational lyrics for depressives.” The attempt to give Connor more backstory is especially appreciated, as he has no voice of his own except for a few deliberately antagonistic and foreshadowing lines in the opening scenes. But the song Pasek and Paul have written for him isn’t helped by being played over scenes of Evan writing to people, forcing the audience to read one character’s words onscreen while another character bares his soul on the soundtrack. These competing perspectives, Evan’s and Connor’s, are just one example of how flawed the musical’s foundation is. The material in Steven Levenson’s script is rich with possibilities of additional themes to be teased out in a production – rich vs. poor, single-parent household vs. family with a stay-at-home mom – but it becomes so focused on Evan and his perspective that Connor’s issues are entirely sidelined. Combine that with a new song that comes from a voice that is a complete 180 from the character as described by others (and from the character’s actions), and you can’t help but feel even sadder for Connor that he’s been made a supporting character in a story that revolves around him.

Tasked with making a film out of this deeply, perhaps irreparably flawed material, director Stephen Chbosky does everything he can to capture the alienation of modern high schoolers. While his direction here isn’t nearly as elegant as it was in his earlier “The Perks of Being a Wallflower,” he still manages to find some grace notes to visually connect Evan, Connor, Zoe, and resident overachiever Alana (Amandla Stenberg) and really hammer home the idea that we all hide similar feelings and life would be that much easier if we shared them with each other. Not all of Chbosky’s directorial decisions work, though. The decision to make “Sincerely Me” a celebration of Evan and Connor’s made-up friendship instead of a moment of connection between Evan and Jared only furthers the idea that the material does not understand the moral complexity of its own plot. But Chbosky does fantastic work with his performers. Platt scales back his stage performance appropriately for the screen without sacrificing a bit of the heart and vocal power that made his Evan so winning. Stenberg is an appealing presence, tearing into the new song “The Anonymous Ones” with surprisingly robust vocal chops. Dever further stakes her claim to “best actress of her generation” status with a performance that beautifully captures the grief and anger of losing a family member who was terrible to you in recent years but to whom you were still deeply connected. Adams taps into the suffering of a woman who gave herself so completely to her family but still missed what was right in front of her, and Moore is a great mirror image as Evan’s mom, a woman struggling to make the best of a bad situation and slowly realizing that she’s failing despite her best efforts. Moore’s “So Big/So Small” performance is the film’s most genuine moment, one so tenderly performed and deeply felt that it almost single-handedly saves the film.

Unfortunately, all of these good-to-great performances can only do so much to save this material, and it’s not enough. The makers of “Dear Evan Hansen” had an opportunity with this film to at least attempt to fix what was so flawed in the original project, but the film reeks of a group of people so in love with the original piece of work that they couldn’t even see the flaws. “Dear Evan Hansen” is deeply in love with its title character, and while it doesn’t let him off the hook for the bad things he does, it loves him so much that it loses sight of how hurtful his actions are until the last act. The attempts to give him more of a redemption arc only further sideline the people he hurts, as well as the person whose story he co-opted for himself. While there may yet be a way to save this material, this simple fine film version can’t do it. It’s content to wave out of one window while not even checking the view from other windows until it’s too late.