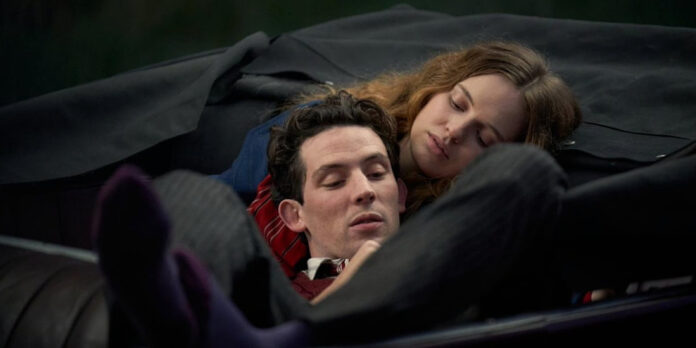 THE STORY – With her employers away, a house maid sneaks off to spend quality time with her secret lover — a man who’s engaged to another woman.

​In many ways, capturing the five senses is much easier to do in a novel than in a film. Writers can use language to describe things in a way that filmmakers simply can’t. But in “Mothering Sunday,” Eva Husson manages the difficult trick of capturing on film how a writer describes how things feel to the touch. This incredibly sensual film contains a perfect blending of sight and sound, coming as close to approximating the sense of touch as possible using only those two things.

Jane Fairchild (Odessa Young) is an author writing a novel that may yet be her masterpiece. It is an autobiographical piece about the time in her life when she worked as a maid for a well-to-do British couple (Olivia Colman and Colin Firth) after the First World War. Specifically, spending a day off with Paul (Josh O’Connor), the last living son of the neighboring Sheringham family, before he marries the daughter of a family friend. The entire main plotline takes place over that one day, but we also follow Jane a few years later, when she is an established writer living with a philosopher named Donald (Ṣọpẹ́ Dìrísù), as she looks back on those days and attempts to write them. And on top of that, in the moment with Paul, Jane also recalls some moments from previous trysts. These multiple layers of memories can be a bit difficult to follow at times, but once you become accustomed to the film’s rhythms, it all connects.

Husson is working on a very special wavelength here, attuned to the minutest details of sensation and how sense memory can take us on a journey. The sticky sweetness of a dot of jam, the weight of a coat rippling behind you in the wind, the tacky pop lipstick makes when you open and close your mouth, the warmth of a loved one’s hand on yours… So many images in “Mothering Sunday” conjure up sense memories from the way the light hits an object and the sound something makes. The images feel sensual, even tangible, in a way that most films do not. These images are perfect cinematic versions of a writer’s descriptive text, giving us a feeling of what Jane’s book is like in addition to what her direct experience was like.

Thankfully, the cast is up to the task of filling all these images with tangible human emotion as well. O’Connor and Young have incredible chemistry together, and they sell the forbidden romance of Jane and Paul easily. Dìrísù provides just the right amount of warmth to make us love Donald while still hoping against all hope that Jane and Paul’s romance doesn’t end in tragedy. As the Nivens (the family Jane works for), Colman and Firth are the physical embodiment of the weight of grief. The Nivens have lost all their sons to the war and almost all of their friends’ sons, and they carry it around with them even in happy times. Tasked with selling some of Alice Birch’s screenplay’s trickiest lines, this couple of master thespians do what they do best and make a direct connection with the audience through perfect phrasing and body language. Unfortunately, not even the legendary Glenda Jackson (as an even older Jane) cannot make the film’s non-ending land with the emotional resonance Husson wants it to. But with stunning art direction, cinematography, and score to aid the other great performances, “Mothering Sunday” is a feast of sensual cinematic delights.