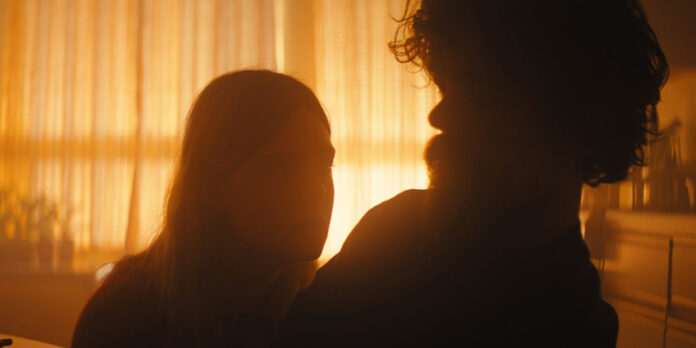 THE STORY – Del (Peter Dinklage) is alone in the world. Literally. After the human race is wiped out, he lives in a small, empty town, methodically going from house to house, collecting batteries and other useful items, and burying the dead. He dines alone, reads, watches movies, and shelves books in the local library he’s made his home. He’s content in his solitude—until he discovers Grace (Elle Fanning), an interloper on his quiet earth. Her history and motives are obscure, and worse yet, she wants to stay.​

​​​​​​Shot with a care for those who have ever felt isolated or lonely, “I Think We’re Alone Now” (Which does not feature the famous Tiffany song from 1987), is an impressively shot film from cinematographer/director Reed Morano who has gained fame recently for helming the pilot of the award-winning Hulu show “The Handmaid’s Tale.” Here, she brings the same painterly quality, care and attention to the visuals and the performances of the film’s two main stars: Peter Dinklage and Elle Fanning. All seems to be going well for “I Think We’re Alone Now” in its first two acts until a third act twists suddenly disrupts the story and thrusts it into a direction which will surely divide audiences.

Del (Peter Dinklage) is the last man alive in his once prosperous town. An unexplained event has claimed the lives of everyone he once knew and interacted with. He uses his former office at the public library as a new base to set up operation. He enjoys drinking win and going fishing by himself. It’s a quiet and lonely existence but it keeps him busy as he meticulously goes through the houses of all of those who have previously died and cleans them. Searching for food, batteries and anything else he can to survive, he finishes his cleanse by burying the bodies and marking the house with a giant X when he’s done. Then it’s off to the next one. This goes on for an undisclosed amount of time (There are a lot of X’s) until he comes across Grace (Elle Fanning), who he finds in a car accident. Wary of where she came from and what she wants, the reclusive Del must make a decision of whether or not he wants to accept that he’s no longer as alone as he previously thought he was and what to do with Grace.

Objectively speaking, the first twenty or so minutes of “I Think We’re Alone Now” which shows Peter Dinklage, all by himself, going about his daily routine with zero dialogue is arguably the best part of the film. Seeing him clean the houses that once occupied the living, marking them with an X when he is done and then driving in his Ford truck to bury the bodies is both haunting and quite tranquil at the same time. For a man who more than likely was always ignored by society, it’s not a surprise that he would take solace in the new order of things which results in his own total isolation. Peter Dinklage (You might know him from a little television show called “Game Of Thrones”), has such an expressive face that he’s perfectly able to convey a deep sense of sadness yet quiet strength in his performance as he pushes through his new daily life. He is soft spoken and a man of very few words but Dinklage makes every syllable and moment count. Once Elle Fanning gets introduced into the story, we’re less interested in her and her dynamic with Peter Dinklage and more emotionally invested in what Del is thinking now that his new life has been disrupted by this mysterious stranger he knows nothing about.

As said before, technically, “I Think We’re Alone Now” features gorgeous cinematography. The camera is patient and does not move too much. Instead, it slowly pushes onto the world, onto the character’s faces, letting us know that while we’re allowed inside into Del’s world but much like the character himself, it always keeps us at an arm’s reach away. There is some humor which gets interjected into the story once he starts to interact with Grace more but the ominous sound work, controlled cinematography and wonderfully composed score help to keep the story grounded in painstaking sadness throughout.

Ultimately, “I Think We’re Alone Now” is a story about depression. How do we deal with it? How does this one man, deal with it? Was he depressed before the event which suddenly took the lives of millions of people? Probably but we’re not very sure. Reed Morano keeps us guessing throughout which makes “I Think We’re Alone Now” a visually intoxicating and almost spiritual movie in a sense as it focuses in on the characters and their universal themes of sadness and longing for a connection. Everything plays so brilliantly and beautifully until a twist is introduced in the third act which tries to provide more context for the ambiguous and far more interesting plot which we were working so hard and well on to fill the gaps on for ourselves. I won’t get into the spoilers pertaining to this twist but suffice to say, I wish we could’ve just gone back to our two mani characters cleaning houses.