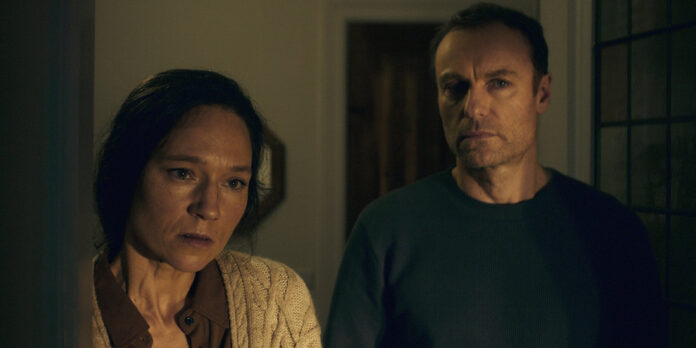 THE STORY – To escape mounting tensions at the advertising agency they co-own, French-German couple Nina and Jan whisk their kids, Max and Emma, away to their seaside vacation home. The couple has signed a new politically charged client, forcing them to confront their clashing priorities. But what’s meant to be an idyllic off-season retreat turns sinister when burglars tear through the house, unseen by anyone except Nina. Though at first the aftermath brings the family closer, it’s short-lived. As the police investigate and the evidence doesn’t add up, the account of what took place begins to unravel alongside the couple’s faith in each other.
​
THE CAST – Sabine Timoteo, Mark Waschke, Jule Hermann, Wanja Valentin Kube, Hannes Perkmann & Daniel Séjourné

​​Paranoia is such a mysterious yet powerful emotion. It can creep into every facet of our lives and change the very chemistry of our brains. Capturing such an abstract essence on film is difficult, yet Ronny Trocker’s desolate drama “Human Factors” does just that. This portrait of a family on the verge of fracture brings to mind the works of Michael Haneke and other European masters of bleak cinema. While it accurately makes visual the feelings it tries to evoke, it ultimately reveals itself to be a fairly hollow and surface-level endeavor, whether intentional or not.

Nina (Sabine Timoteo) and Jan (Mark Waschke) are a French-German couple who co-own an ad agency that takes on an electoral campaign as their latest client. It is new territory for their company and it immediately brings about pushback from the candidate’s critics. Escaping to their vacation home with their two children, their lives are disrupted on a personal level when a strange break-in occurs while they’re home. This mysterious and traumatizing event kicks off a tormented domino effect amongst the family, bringing to light fears and insecurities that they didn’t even know were there.

The very look and feel of the film is depressing. Through its desaturated colors, low lighting, sparse soundscape, and tight aspect ratio, it seems to revel in the way it intends to make its audience feel as downtrodden and constricted as its characters. This contributes to the general paranoid environment which the film’s subjects have created for themselves. Trocker effectively creates a biodome of casual misery. Its evocation of particular feelings is undoubtedly the greatest achievement of “Human Factors.”

And while any movie that can so effectively conjure a particular atmosphere deserves praise to some degree, this film eventually goes to show that there’s just not much there beyond that. It uses a uniquely non-linear structure, constantly circling back to the break-in and showing how each family member reacts to it. It’s an intriguing premise, but its eventual conclusion is fairly unsatisfactory. Perhaps that’s the point and the movie is more focused on showing in a less cinematic sense, the way that little things can alter a person’s mind without them even being aware. But all it seems to point to is a fairly shallow venture overall.

The film makes slight signs that it is going to explore deeper issues than it does, but it just doesn’t outwardly say very much about the topics of which it makes the briefest of mentions. The political campaign that hires the advertising firm seems to be a fairly controversial one based on a brief moment of vandalism. Moreover, a focus group being observed by the company quickly discusses social fears that sound a lot like racial dog whistles. There are also a few instances of radio and television broadcasts heard in the background of scenes that seem to be discussing similar nationalist anxieties and issues. None of this is looked into, which, again, may be intentional. It could be commenting on the way that dangerous ideas can slowly creep into one’s day-to-day existence until they become an unremarkable aspect of life. This runs parallel with the concerns of the family, which has seemingly invaded their collective consciousness, but that doesn’t mean that these potentially interesting notions aren’t presented in a half-baked fashion.

“Human Factors” is built on a sturdy foundation made up of its director’s strong vision and performances from its cast that aid in further amplifying Trocker’s intent. But the film just doesn’t add up to much. The briefest glimpses of meaning are intriguing, but the movie’s lack of interest in further exploring these aspects only makes them all the more questionable in the first place.