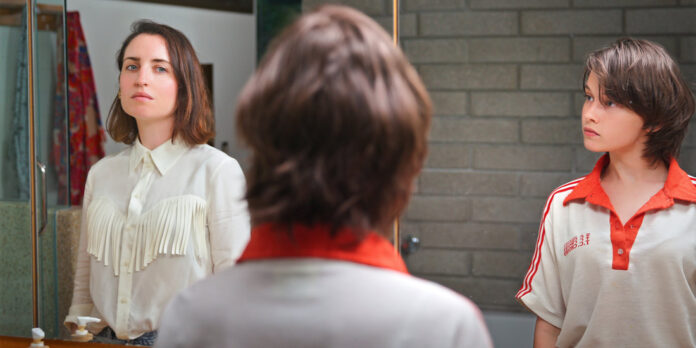 THE STORY – On the day an asteroid is scheduled to obliterate Earth, freewheeling Liza (Zoe Lister-Jones) scores an invite to one last wild gathering before it all goes down. Making it to the party won’t be easy, though, after her car is unceremoniously stolen, and the clock is ticking on her plan to tie up loose ends with friends and family. With a little help from her whimsical younger self (Cailee Spaeny), Liza embarks on a journey by foot across Los Angeles as she seeks to make peace with her regrets—and find the right company for those last few hours.​
​
THE CAST – Zoe Lister-Jones, Cailee Spaeny, Olivia Wilde, Fred Armisen, Helen Hunt & Lamorne Morris

​After just finishing a year that felt like a slow and steady march toward oblivion, watching a movie about the end of the world, as highly fictionalized as it is, may not seem like the best idea. But “How It Ends” manages to avoid serving as any sort of reminder of our pandemic-saturated world, even if it was very clearly filmed during the height of COVID. It’s a charming and light movie about learning to make peace with your past. It may not be entirely successful in terms of laugh delivery, but its breezy feeling makes for an entertaining, low-pressure watch.

It’s the last day on Earth before an asteroid is about to hit and destroy all life on the planet. But Liza (Zoe Lister-Jones) isn’t going to spend her last few hours in mourning. Accompanied by a metaphysical projection of her YS, or younger self (Cailee Spaeny), she embarks on a journey to meet, confront, and make peace with figures from her past. Along the way, she encounters a wide assortment of characters doing a whole bunch of different final activities, mostly played by famous comedians and actors.

Not only is Liza in a shockingly calm state given the situation, but so is literally everyone she comes across. The screenplay has a casual, detached style of dialogue, which is comically in direct opposition to the dire circumstances all of the film’s characters are facing. This airy tone is helped by the sunshine-filled look of the movie. That doesn’t mean that film’s crafts are precisely configured; the cinematography is unremarkable and some shots even appear to slide in and out of focus.

Anchoring the film are the charismatic and likable performances from the film’s two stars. Spaeny is spunky with pathos to spare. And Lister-Jones is a delight, which is especially admirable given that she is pulling triple-duty as the star, co-writer, and co-director. She is unendingly funny as the film’s anchor, and the entire endeavor would totally fall apart if she weren’t so capable in her performance.

While it’s an engaging watch, the whole thing can’t help but have the feeling of an interesting experiment rather than a noteworthy piece of narrative filmmaking. The uneven script and varied success of the numerous cameos keep it from greatness. It’s also so apparently a product of the COVID era, with most of the actors pointedly standing apart and keeping their distance. It’s a fairly noble endeavor to make art under such dire global circumstances, but I can’t help but wonder if this is best viewed as a time capsule of how artistic types survived and created pieces of work in an unprecedented era.

I can see this being looked at by future film lovers as one of the better cinematic products of the COVID era. It’s not entirely well put together, but it’s a humorous look at how we react to cataclysmic circumstances. “How It Ends” serves as a reminder that, when faced with disaster, it’s going to be even harder if you can’t find balance within yourself.